Josie had an appointment for a swallow study yesterday.  She was super brave for the x-ray... 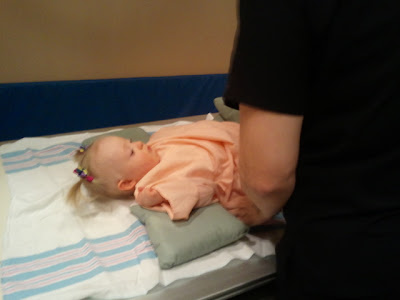 ...and she seemed agreeable when placed in the chair where the swallow study would be conducted. 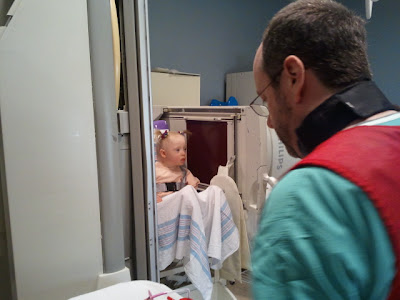 However, shortly after this photo was taken, mom had to go back behind the wall and the stranger anxiety kicked in.  Josie cried throughout the remainder of the swallow study but the staff at the hospital was very kind about it.  The speech and language pathologist commented that he remembered Josie from her days in the PICU and she's just as cute now as she was back then.  His comment, although well intended, brought back some painful memories for me; memories of when Josie's lungs were so weakened that she was put on a ventilator for weeks.  We were told to prepare to lose our daughter.  This was a time that was so difficult that I cannot even bring myself to look at photos from those two months. 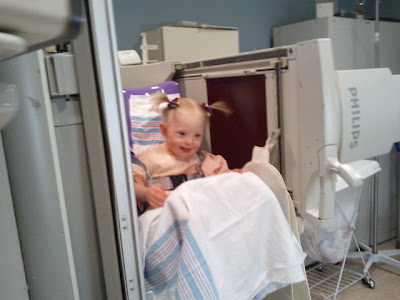 And while his comment was a sad reminder of those difficult days, it also reminded me of something else; something that I've been anticipating for months.  It is Josie's one year anniversary of NOT being hospitalized.  Yes!  Josie spent a great deal of 2010 in the hospital (June and November were the only months Josie was NOT hospitalized).  December 15th was her last hospital admission. It's been one whole year since this little lady has spent the night in the hospital and that calls for a celebration! 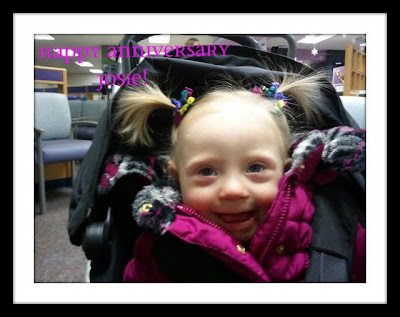 We can't have a party because Josie is quasi-quarantined again so that we can continue to remain hospital free throughout this dangerous cold and flu season.  So I'm throwing a virtual party, via this blog!  If everyone would kindly raise their virtual glass, I'd like to propose a toast: Here's to the medical staff at the children's hospital who remained dedicated to restoring Josie's health; Here's to the family and friends who stood by us and supported us throughout that difficult year; Here's to everyone out there whose prayers were heard and answered; Here's to God - each day He allows us to spend with Josie is a blessing and a cherished gift; And here's to Josephine Leanne - she's overcome more health obstacles in a year than most people endure in a lifetime.  She is a fighter, which is important because she has many great things yet to do in her life!
Happy Anniversary Josie!
Posted by EN at 7:52 PM