Last Friday we packed up and embarked on an adventure - a two hour plane ride with a couple of babies (yikes!).  We were headed out West to visit YaYa, Papa, Uncle Corey (Travis' brother), Aunt Sarah (Corey's wife), and Abby (the girls' beloved cousin).  The girls' Great Grandma and Great Granddad (YaYa's parents) were kind enough to meet us out there which added to the fun! 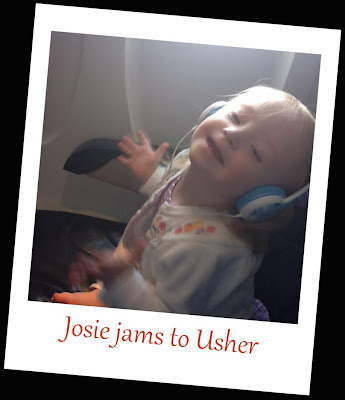 The plane ride went very smoothly.  Merryn slept and Josie rocked out to Usher.  Josie thought he sounded even better at 30,000 feet.
Josie's pulmonologist wanted her to bring a portable oxygen concentrator in case the altitude caused breathing difficulty.  I checked her oxygen saturations throughout the flight and she did great.  Unfortunately, the first night did not go so well.  Sleeping in the mountains caused Josie's O2 saturations to drop which meant we had to break out the cannula and provide her with some supplementary oxygen for the first time in a year.  As if that wasn't bad enough, our portable oxygen concentrator died at 3am!  That required a brief trip to the local children's hospital where Josie was sent home with tanks of oxygen to help her breathe while she slept.  That's why she's sporting the little brown cannula stickers in most of the photos.  Oxygen drama notwithstanding, she was a little trooper and we were very proud of her! 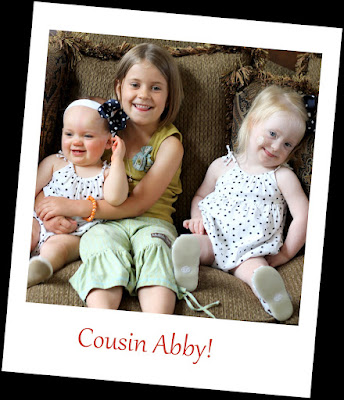 The girls LOVED hanging out with their six-year-old cousin, Abby.  Merryn enhanced her leg strength and perfected her walking skills pushing Abby around on a little riding toy.  Josie enjoyed perusing her new books with Abby.  We took full advantage of Abby's cuteness by taking lots of pictures of her - she's very photogenic! 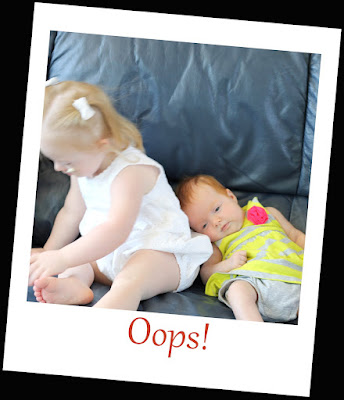 We we very fortunate to be able to spend a little time with my childhood friend, Amy, and her precious new baby, Madeleine.  Amy is the most laid-back first-time mom I've ever met as evidenced by the fact that she casually plopped her infant down in Josie's arms and walked away.  Josie wasn't really interested in cradling the newborn which resulted in this uncomfortable looking topple.  Poor Maddy! 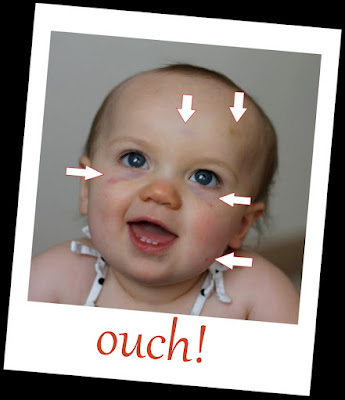 Speaking of toppling, Merryn took her fair share of spills over the weekend.  Like most entry-level walkers, Merryn is usually sporting a battle scar or two.  When we first arrived, she had a small bruise on her forehead.  I apologized to my mother-in-law because she had hired a photographer to take family photos while we were there, and I hated for Merryn to look roughed-up in the photos.  Well, before the photographer even arrived, the bruises multiplied!  She looked like she had fallen down a flight of stairs!  As if that wasn't bad enough, Merryn lost one of her shoes so she was barefoot and bruised for the big photo shoot. 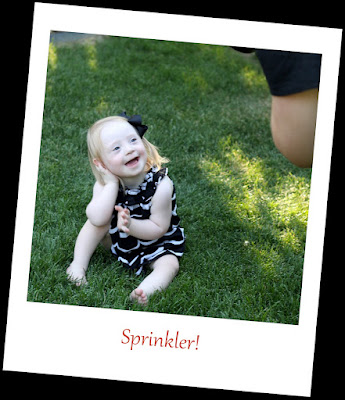 Josie took awhile to warm up to the photographer but after I retrieved her stuffed chicken and my iPhone and blared her favorite tunes, she turned on the charm.  At one point the photographer stopped shooting, turned around and said "Is she doing the sprinkler?!?"  That's our girl!
I took a grand total of 438 photos of our trip (seriously!) which left me with no choice but to create one of our famous CCE photo montages.  We hope you enjoy it as much as we enjoyed our trip:
Make a video - it's fun, easy and free!
www.onetruemedia.com
Posted by EN at 1:59 PM