Leanne and her "brother"

On more than one occasion, I've been asked to distribute advice on how to talk one's husband into adopting a baby with Down syndrome.  Quite truthfully, I have no idea.  I never had to convince Travis that adopting a baby with Down syndrome was the right thing for our family.  I don't even remember the introductory conversation we had about the topic, but there was never an ounce of persuasion needed to sway Travis.  He always knew it was the natural thing for us to do. 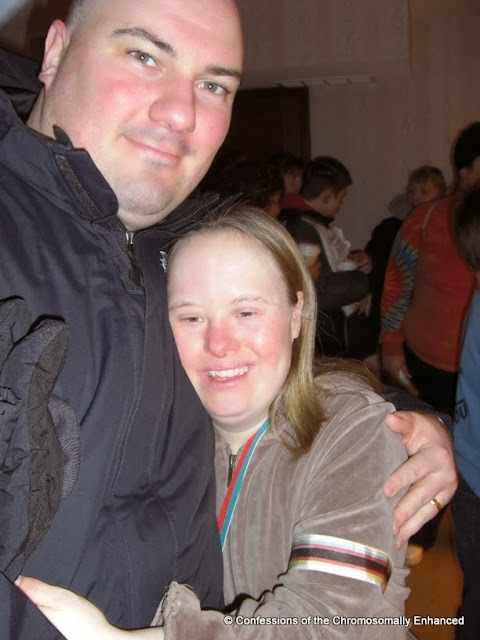 
Although Travis did not grow up with much exposure to people with special needs, from the minute he met Leanne, he approached her with an attitude of acceptance.  This was clearly illustrated to me the first time I met Travis' mother.  She was making polite chit chat about me and my family and I told her that my sister has Down syndrome.  This was the first time she'd been notified.  Now, Travis and I had been spending time together for a little while and he'd told his mom about me, but he never bothered to mention the fact that the blond-haired, blue-eyed, bubbly sister of mine who cheerfully greeted him every time he stopped by my house possessed an extra chromosome.  Doesn't that seem like an interesting tidbit to note about your new girlfriend?  I guess not.  It was such a non-issue for Travis that it just slipped his mind to include that detail. 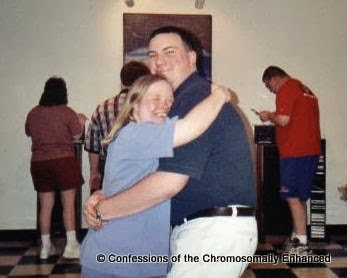 
Then there was the time that I had a summer job as a promotions intern for a local radio station and we were broadcasting from the state fair.  Travis brought Leanne out to the fairgrounds to visit me.  Apparently he ran into a group of his high school friends in the parking lot and I asked him if it was awkward to explain why he was there with a 4'8'' chromosomally enhanced date on his arm and he just shrugged and said the only embarrassing part was the fact that he was driving my mom's candy apple red PT Cruiser!  (Sorry Mom!) 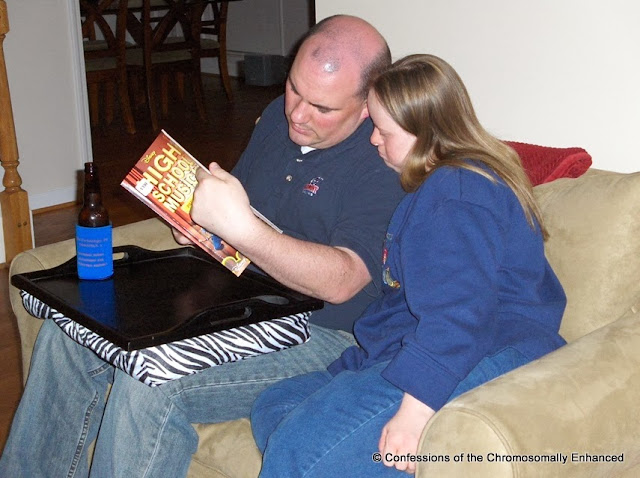 Travis gets an education on "High School Musical" in 2007
Travis never acted awkward or embarrassed around my sister.  In fact, from the beginning, he treated her like she was his own sister.  He laughs with her, teases her, has serious conversations with her, and sometimes even gets irritated with her - just like I do.  Only Travis has always been much more effective in communicating with Leanne in these moments.  She respects him immensely.  She is proud to call him her "brother".  The "in-law" concept is lost on Leanne.  Minor detail, right?  Except when we were standing in the front of the funeral home at my grandpa's wake greeting guests and Leanne kept introducing Travis and (visibly pregnant) I as her "brother, sister, and (gesturing to my abdomen) their baby".  In that case the "brother-in-law" thing might have been nice to note but I digress... 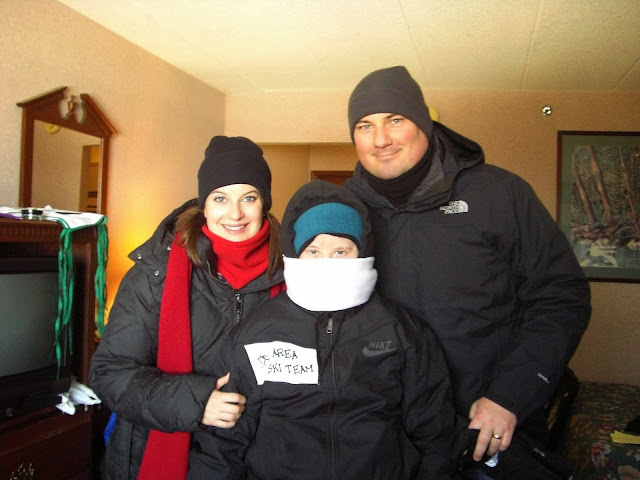 Leanne with her sister and brother (in-law) before the Special Olympics cross-country skiing competition in 2009
Sometimes I forget just how special it is to have a husband who accepts and loves Leanne as though she were his own sister.  The fact that he was unfazed about the idea of adopting a chromosomally enhanced baby of our own is one big reminder.  But last week he came home with another reminder.  He didn't want me to share this story but I kept nagging him until he reluctantly caved in muttered "go ahead".  So tune in to the next post to find a really important reminder of how an individual who is perceived as flawed by many members of society, can have a profound impact on the life of another person, just by being herself. 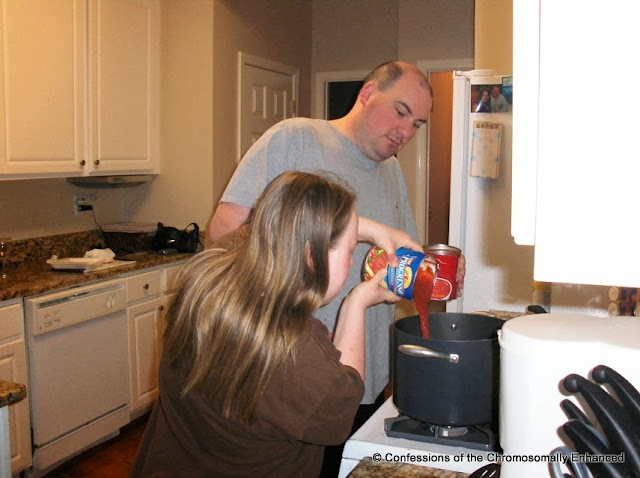 Travis and Leanne cook together in 2007
For now I'm off to mine through the dark abyss of the unfinished part of our basement for more old photos to share.  Stay tuned!
Posted by EN at 5:14 AM