How my parents announced Leanne's Down syndrome diagnosis to me

I saw a news segment recently that described Down syndrome as a "devastating diagnosis".  The word "devastating" stung me.  I was offended on behalf of my sister because there is nothing "devastating" about her.  I was discussing this with my friend, Christy, who received the diagnosis for her little girl three years ago and she said:

"It felt devastating to us, but that's because we were told it was devastating!  We need to change the way society looks at our loved ones because the perception is not reality."

I've recently been asked to blog more about the sibling relationship - particularly, my experiences growing up with a sibling with Down syndrome.  One of the most frequently asked questions I receive is how my parents told me Leanne has Down syndrome. 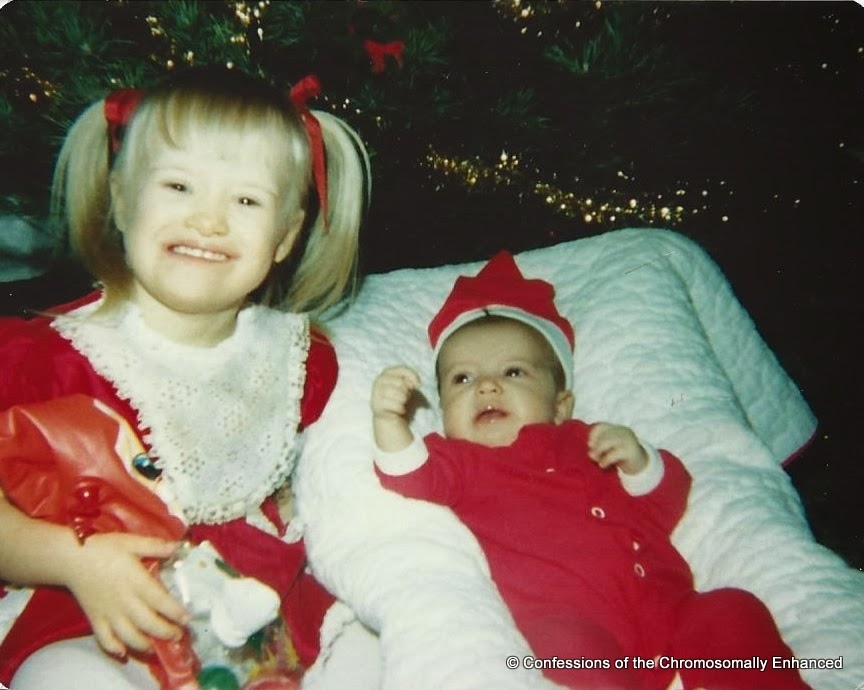 This question has always struck me a little funny but I try to imagine where the parent is coming from.  You've just received MAJOR news.  The baby you were expecting is not the baby you received and your mind is filled with questions, your heart is filled with uncertainty, and you're trying to make sense of it all.  Then, it occurs to you that you're going to have to break this all down into a simple discussion that is easy for a child to digest.  I can imagine how daunting the prospect of that is considering you're not quite sure how to digest it yourself. 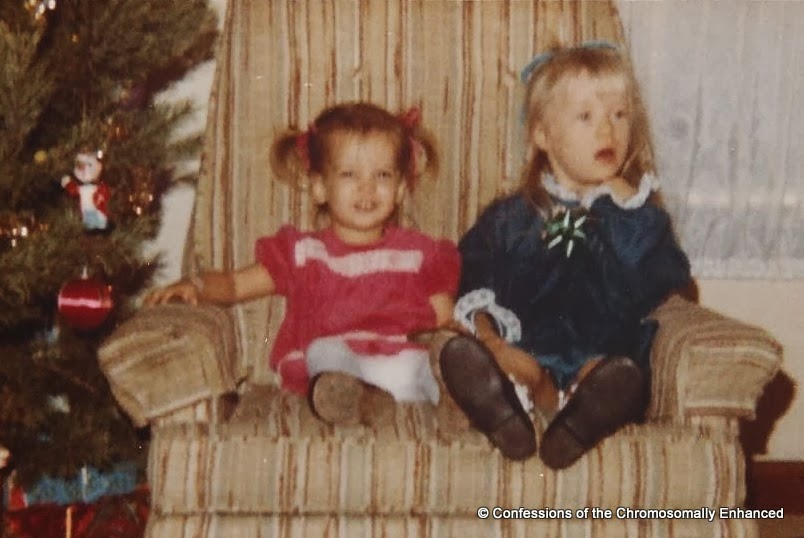 But here's the thing about kids: kids aren't born with bias, judgment, or prejudice.  Those things are learned later on.  Kids are inherently innocent and accepting.  Kids don't care about epicathal folds, simian creases or enlarged tongues.  I never questioned why Leanne had slanty eyes or a flat nasal bridge anymore than I questioned why she had blond hair and I had brown hair.  She was my big sister and she was the best as far I was concerned! 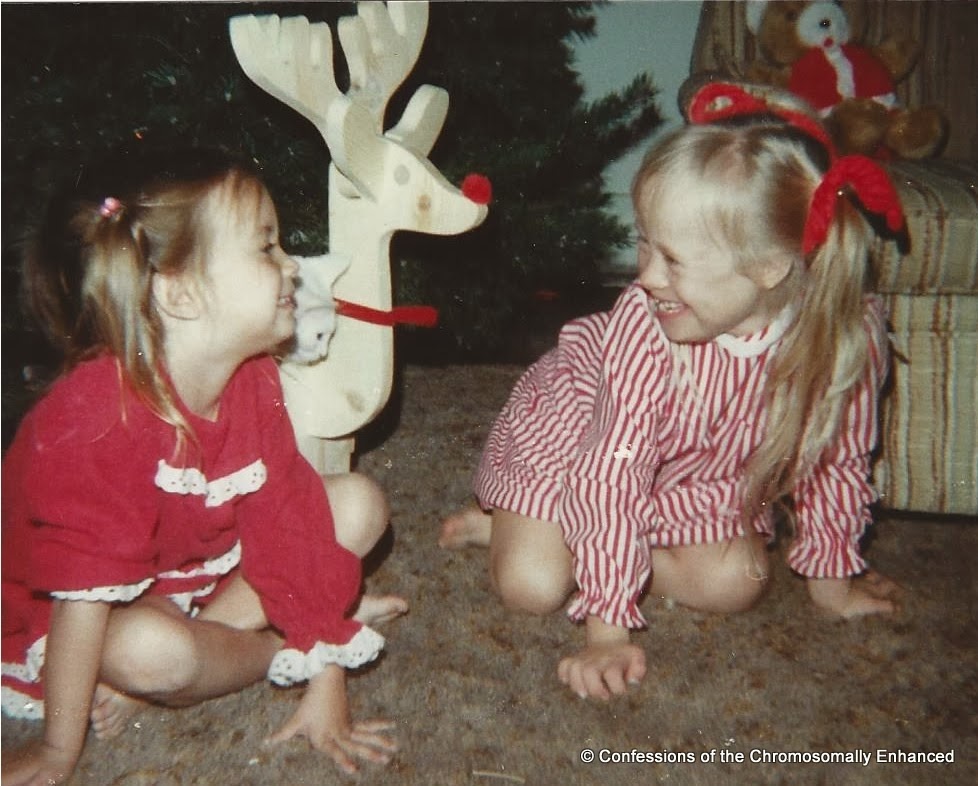 So to answer the question posted to me by many concerned parents, I suppose that my parents decided to leave well enough alone and to let Leanne and I build a sibling relationship without any big "talk" about our differences.  Now, that's not to say that the topic of Down syndrome was avoided entirely; my parents were always very open and comfortable talking about Down syndrome.  However, it just was not a feature of Leanne that they felt the need to single out and explore in great depth with me.  As questions arose, they answered them honestly and without any inkling of any internal doubt they may have experienced.

In fact, I recently commended my mom; I told her that if she or my dad ever experienced feelings of upset, doubt, grief or mourning related to Leanne's diagnosis, I never detected an ounce of it.  All I remember growing up is having two parents who loved and accepted Leanne and I unconditionally.  I felt like they were proud of us.  I felt like the focus was on our abilities and never what we lacked.  As far as I was concerned, my upbringing was happy, healthy, and "normal." 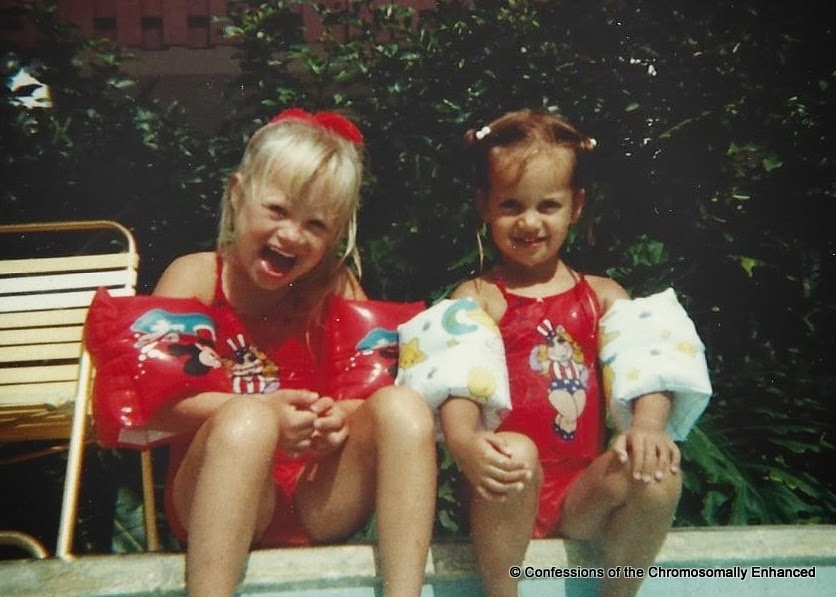 What about the distinct differences?  What about the delays?  What about the therapies?  As a parent of a two-and-a-half year-old typically developing daughter, I can tell you that Merryn already realizes that Josie needs additional help with some things.  Heck, Merryn is the first to jump in and offer assistance.  But she does so from a place of complete innocence - there is no judgement nor pity behind her actions.  She just loves her sister and she wants to help her.  She knows Josie has therapy and she knows that some therapies she can't participate in.  But she doesn't question that because it's completely normal to her.  Merryn doesn't know that the neighbor kid's sibling doesn't have therapy and she really doesn't care.  She's a child.  She doesn't view the world the same way adults do. 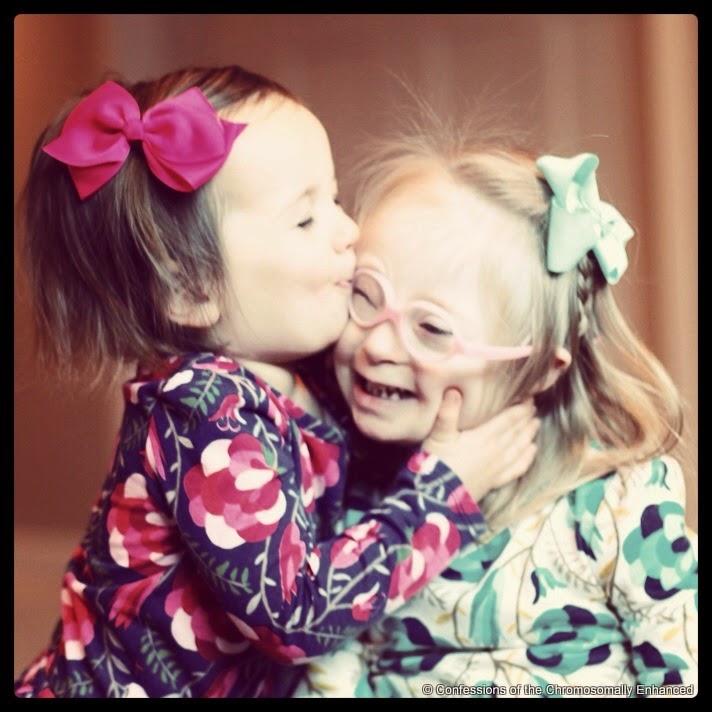 As I got older, did I eventually realize that having a sibling with Down syndrome was not exactly commonplace?  I'm sure I did.  But because of the tone of acceptance set by my parents, it was never a sticking point.  It truly never bothered me.  And from what I'd seen, it never bothered them.  But most importantly, it clearly did not bother Leanne.  I would challenge you to find an individual with a greater sense of confidence and self-worth than my sister.  We should all be so lucky. 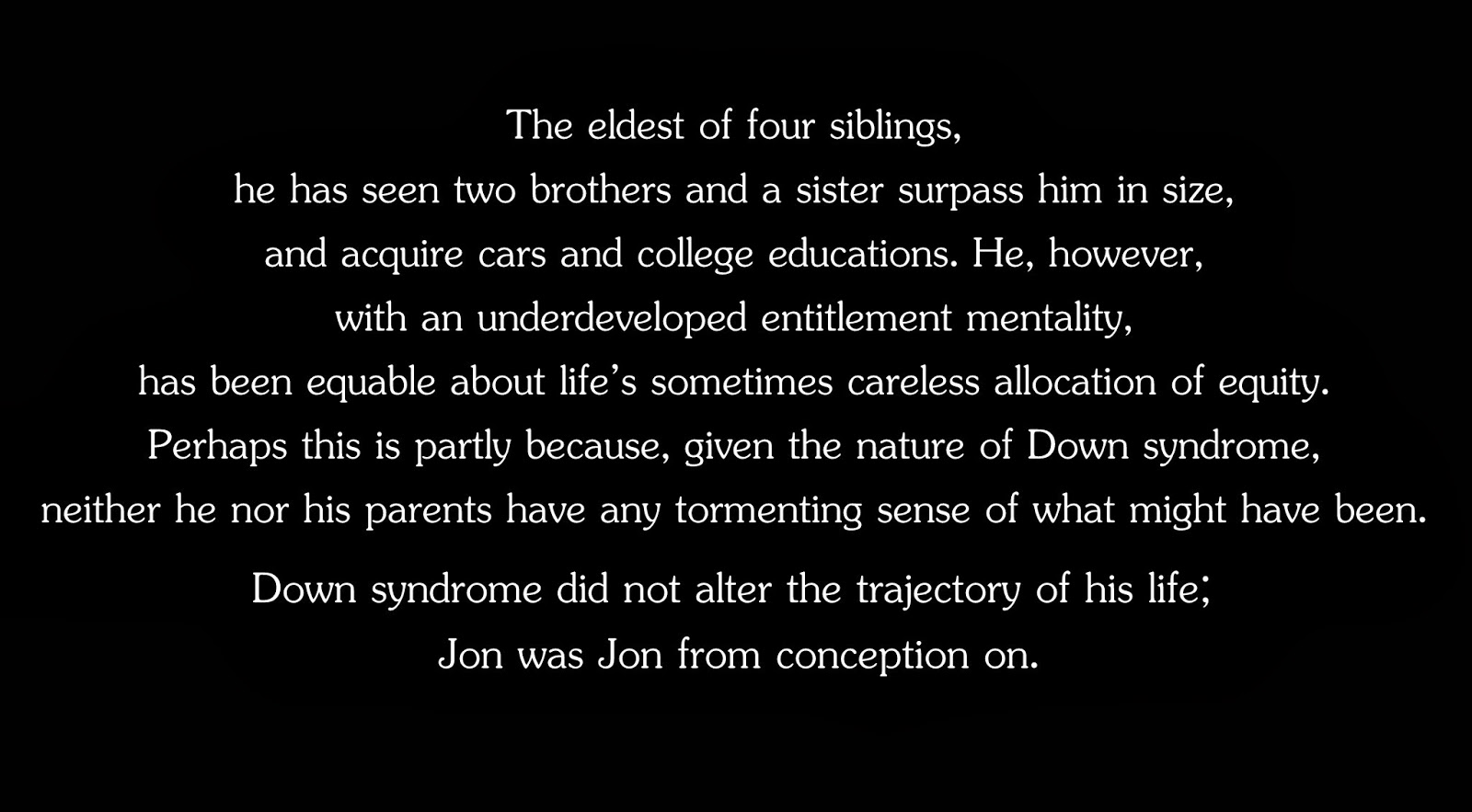 Down syndrome did not alter the trajectory of his life; Jon was Jon from conception on.

Even when society sends the message that individuals with Down syndrome are genetic flaws who somehow fall short of what constitutes a satisfactory human life, those of us who have years of experience to draw from, beg to differ.

I believe my parents would share George Will's perspective about Down syndrome, and I, in turn, agree wholeheartedly.  Despite  possessing what some may perceive are blatant shortcomings, Leanne's life is fulfilling and  purposeful.  She has so much to offer to those who are willing to set aside negative bias and realize that Down syndrome did not alter the trajectory of her life.  She is an individual with Down syndrome and that is exactly who God intended her to be.

I have read more than one parent of a child with Down syndrome reflect back on how their attitude has changed since receiving the diagnosis with the sentiment 'I wish I had known then what I know now' and I believe George Will's article gives us a glimpse into that perspective after 40 years of experience.  He speaks about Jon's "gift of serenity" as if to challenge us with the question 'If Jon is okay with Jon, who is anyone else to say he's inferior?'

I would strongly encourage everyone to read George Will's article (click HERE).

I've referenced this beautifully thought-provoking piece in the past and I reserve the right to reference it as many times as it seems to apply in the future because it speaks to my heart.  And I hope that parents whose children have just received a Down syndrome diagnosis can use our experience to help navigate beyond the uncertainty and fears and to find comfort and serenity.
Posted by EN at 8:41 AM