Josie attends preschool in an inclusive environment; the majority of the class consists of typically developing peers and there are a couple of children with special needs.  The kids who need additional assistance, like Josie, are assigned an aide or paraprofessional (para).

Josie lucked out this year and she got the same aide that she had last year.  She's a beautiful, soft-spoken, and maternal woman named "Ms. Lisa."  Ms. Lisa has a soothing and graceful demeanor that evades me.  She emits such a tranquil vibe that I wish I had a "Ms. Lisa."  She's cool, calm, and collected in the face of preschooler chaos.  More importantly, she's unflappable in the face of Josie's obstinacy. 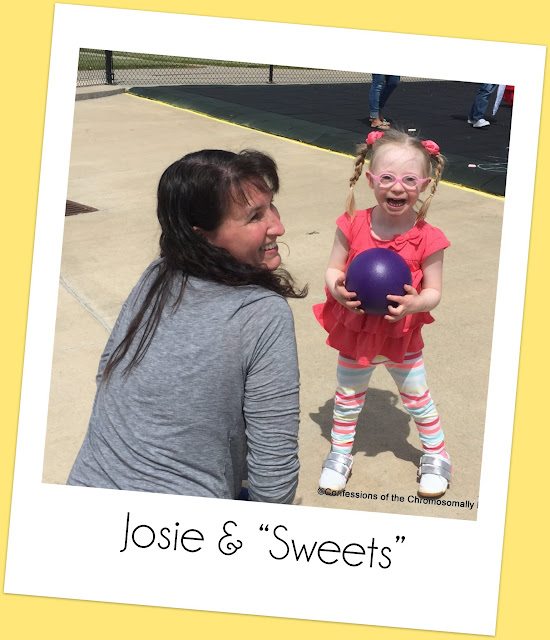 Josie adores Ms. Lisa.  She cherishes their relationship so much, that she refuses to adhere to the appellation, "Ms. Lisa."  No, "Ms. Lisa" just doesn't do it justice.  Instead, Josie has assigned the moniker "Sweets" to her beloved aide.

Where did "Sweets" come from and why does Josie insist on calling Ms. Lisa that?  Heck if I know.  But she refuses to be dissuaded from this nickname.  It reminds me a lot of when Leanne decided Josie would hereby be known as "Catfish with Ketchup."  Travis and I pleaded for a cuter, more feminine nickname, but Leanne would have none of that.  The name stuck.

However, feeling like Josie should show more respect to teachers and other school staff members, I've been encouraging Josie to adopt "Ms. Lisa" as a more appropriate title for her aide.  After all, Travis can't go to work and randomly call his colleagues "Toots" or "Sugar."  Did you call your high school English teacher "Doll Face"?  I didn't think so.
It's not as though "Sweets" is incredibly off base.  You'd likely be hard-pressed to find anyone to refute the allegation that Ms. Lisa is, indeed, very sweet.  But what happens someday when the foremost adjective used to describe Josie's staff members isn't "sweet"?  We can't have her going around calling people "Cranky Broad". 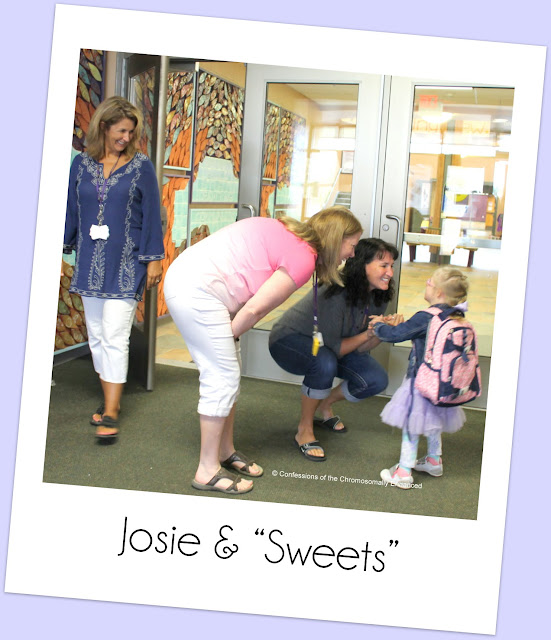 Ah, but for now I'm afraid I'm fighting a losing battle.  And the "Sweets" term of endearment - well, it's just that.  And "Sweets" told me that she doesn't mind.  It's kind of their thing.  So here's to you, Sweets.  Thanks for putting up with our sassy little Catfish.
Posted by EN at 5:59 PM