The Baptism From Hell

In the history of the Roman Catholic Church, never has there been a more disastrous sacramental ceremony.  Actually, if you have a story that trumps this one, please share it with me because it will make me feel better.  But for the sake of hyperbole, I'm going to stick with the aforementioned grandiose assertion.

While anyone can be baptized at any time, it's more common to baptize an infant.  However, we moved to another state when Lydia was 3 months old and it's taken us awhile to get our religious bearings, if you will.  Faithful blog followers understand.  It's been a wild ride to say the least...

Anyway, I now understand why 6 weeks of age is a more ideal time to baptize a baby.  Because a tiny infant's screams can't bellow throughout the echo-inducing stone walls of an enormous church quite like an older baby's can.  Because it's much easier to hold a 6 week old who is writhing in torment, desperately trying to escape this holy torture.   And because when the priest pours water on an infant's head, it's far less likely to turn into a wet tee shirt contest for mom.  Thus, making it a more appropriate, pious, and sacred experience for all.

But that's not the way this went down... 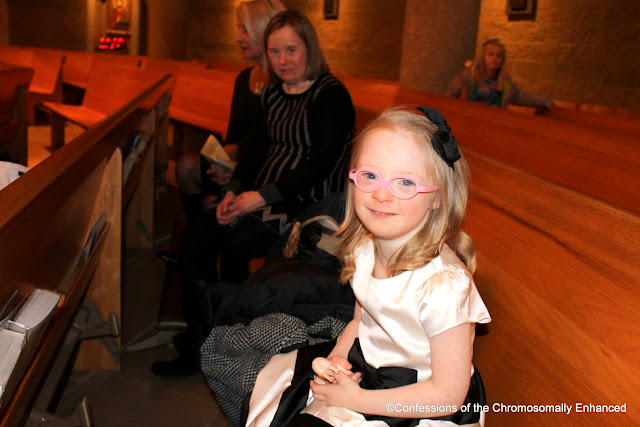 I should have known because there was ample foreshadowing.  Shall we start a week beforehand when it occurred to me that Lydia's baptismal gown hadn't arrived yet?  After checking my email confirmation and realizing that I had accidentally had it shipped to our previous address in the Tundra, I placed a frantic call to Nordstrom, desperately trying to rectify the situation.  Major shout out to Nordstrom, Folks.  Their customer service is second to none.  Shop there!  I am hereby a loyal, life-long customer.

So we had a gown.  We had a bonnet (which she refused to wear).  We had a godmother(or a "Mother of God" as Leanne prefers to call herself).  We had a godfather (but he was unable to attend.  Lucky jerk).  And we had a scripture reader...

...until I re-read my letter and realized that we were not the family that was assigned to scripture after all.  Poor Merryn had read through John 3:1-6 with Mama Hop time and again.  She was ready.  She was excited.  This was her big break!

But that little snafu was easily fixed when the designated scripture reader (who happened to also be our dentist) happily relinquished scripture-reading duties and was quite relieved to be replaced by our dimpled doll face in her plaid dress. 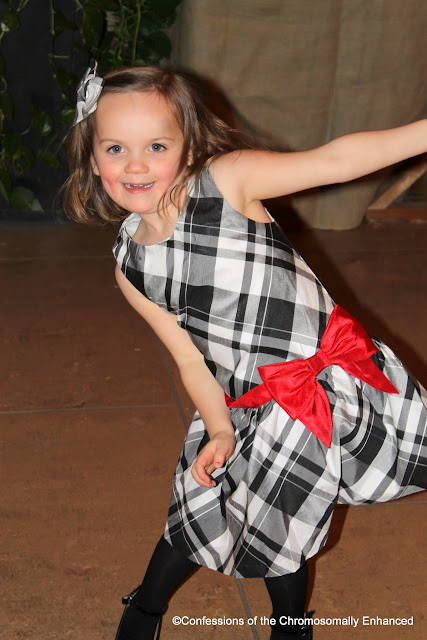 But while Merryn was reading her scripture during the ceremony, Josie escaped the old wooden church pew (turns out she does have gross motor skills when she wants to) and made her way up to the alter where she began handing out hugs to perfect strangers (other parents and godparents) who were all gathered in stoic devotion, trying to attend to the sacred ceremony.  Josie must have sensed their nerves were rattled by the tormented wailing of her 18 month-old baby sister so she thought a hearty dose of affection would help.

Meanwhile, Travis and I were taking turns wrestling this tortured tot into submission and catching her when the other parent began to lose the battle, all the while dripping with sweat from the ultimate cage fight that Lydia had initiated.  No joke.  The world's happiest, most pleasant baby had turned into a monster in the presence of God and everyone (literally).  No one could hear a world the priest said over her screams.  I'm really surprised he didn't stop the ceremony to perform an exorcism.  Seriously, in any other scenario, you would have taken your baby out of the room.  But we couldn't exactly do that, seeing as how she was the main attraction.

Travis said he was shocked that the holy oil didn't sizzle when the priest anointed her with it.  And then, it was time for the grand finale: the holy water.  One by one, I gestured for the other families to take their babies up ahead of us because I knew that this would take Lydia's tantrum to a whole other level.  And it did.  As soon as we stepped up to the baptismal font, Lydia revved up with a vengeance!  She clung to my neck and wailed in agony while Travis desperately tried to force her upper body backwards so the priest could pour water on her blood-red forehead.  The priest looked at me and said "You're probably going to get wet."

Uh, yeah.  Whatever, Father.  I'm already drenched in sweat from this back-ally brawl my child has unleashed on me.  I have bald spots on my head and she has clumps of my hair dangling from her angrily clenched fists.  What's a little holy water?  Just dump your pitcher and let's get this baby out of her misery! 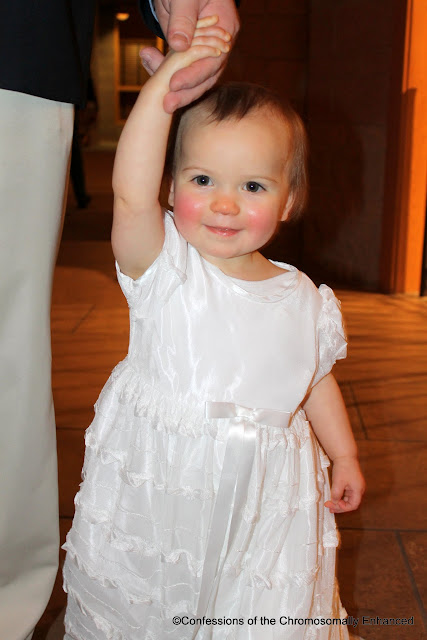 And with that, she was initiated into the Christian faith, freed from original sin, and ready to carry Christ's light out into the world.