This morning we were running late for school.  As I stood in the garage and watched Josie climb into the car at a pace a turtle could run laps around, pausing after she moved each limb, looking around to see if anything about the backseat had changed since yesterday, stopping to run her hand along the leather of the back of the passenger seat as though she was inspecting it for Consumer Reports, I impatiently snapped "Josie, I need you to get in the car faster."

Merryn piped up, "But Mom, you know she has Down syndrome.  That means she's slower."

It was so innocent.  So matter-of-fact; issued with such a benign and blameless tone.  And despite the fact that I've lived with Down syndrome my whole life, and I am well aware of what she was referring to, I needed the reminder in that moment. 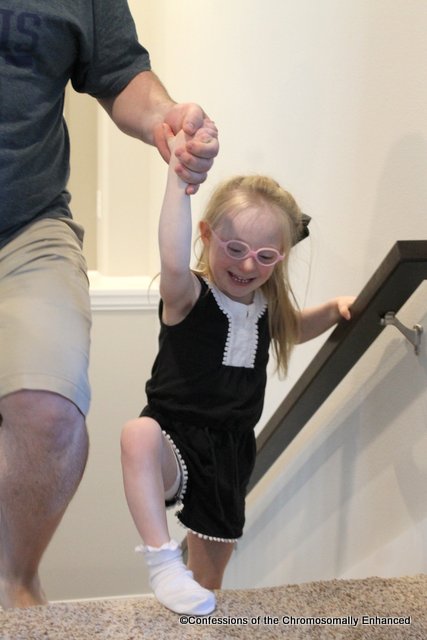 A couple of weeks ago, a friend was voicing concerns about her 5 year-old daughter with Down syndrome.  She was worried about the impact of the diagnosis on her daughter's social life.  What if the other kids notice a difference?  What if there is a divide when her actions/interests don't model theirs?

I asked her if her daughter appeared to be stressed about this.  Was this worry keeping her daughter up at night?

Well, if it doesn't bother her, then why should it bother you?

That perspective came full circle this morning with Merryn's innocent rebuttal to my exasperated comment about Josie's pace.  Josie is in no hurry.  She'll get there when she gets there.  Everyone else can wait.  Their impatience isn't her burden to bear.

I was humbled.  Is this worth snapping at my children over?  Is this worth driving recklessly in a futile attempt to shave a few seconds off of my arrival time?

And once again, Josie, with all of her so-called limitations and flaws according to societal perception, becomes on of life's greatest teachers.  And even though I earned my degree in this subject long ago, apparently I can use a refresher course.

Josie is different.  She may move slower.  She may process slower.  She may get there slower.  But it's not wrong; it's just different.  And her pace may be the reminder the rest of us need to question why we proceed with such urgency.  Why do we place such emphasis on arbitrary pursuits that only end up elevating our blood pressure? That's not to say that we can completely disregard the confines of schedules.  Just like we can't just ignore the significance of relationships and social integration.  But we can take advantage of the opportunity to reassess the weighted value that we place upon these priorities and the contentment that we are unnecessarily sacrificing.

Thank you for the reminder, Josie.  I am honored to be a student in your class.  And Merryn, thanks for letting me borrow your notes.  You always highlight the most important sections.
Posted by EN at 8:31 AM