The summer flew by and just like that, our two oldest babies prepared to enter full-day school.  Josie is enrolled in a full-day kindergarten class in the same elementary school building where she attended preschool. 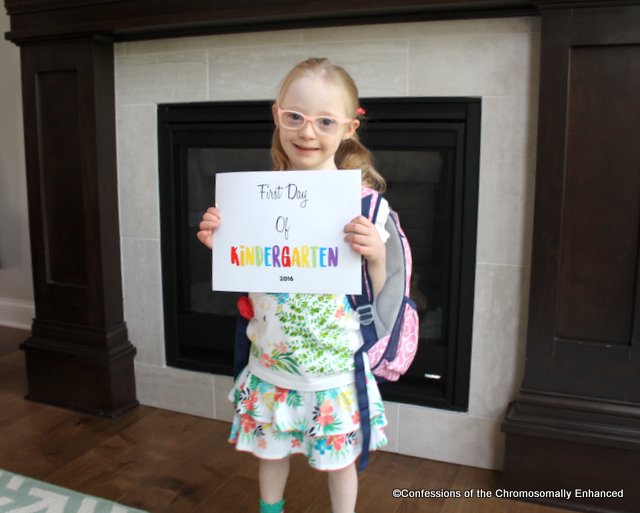 Merryn, will remain in her Montessori program but she is moving up a level to the "5 to 7 year old" program where the curriculum advances at the pace of each, individual learner. 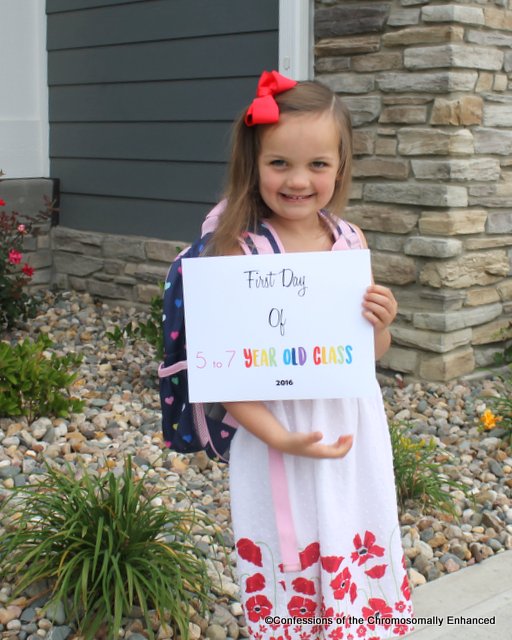 While transition can be difficult for any child, it is especially difficult for a child with special needs.  The world moves faster than what Josie can comfortably process so when something new or out-of-the-ordinary-routine is thrown at her, it is often met with resistance.  That resistance can vary from verbal refusals to oppositional behavior.  That's why it helps to prepare her as much as possible, for any changes that will be occurring. 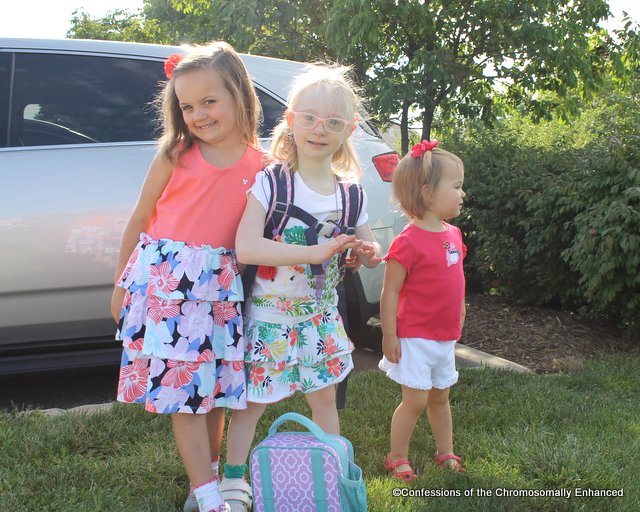 It's easy to take for granted that Josie is generally pleasant and in some ways, oblivious to details in the world around her.  However, I've learned that even when she doesn't seem like she's tuned in, she still notices.  She is still aware of change and while she struggles to articulate her confusion/upset in response to change, it may be communicated in the form of negative behavior.  For example, when we thought we had made significant progress weaning Josie from her G-tube and teaching her to eat orally, suddenly, the holidays arrived.  Our house was filled with family and festivities.  Then, as soon as New Years passed, the visitors left.  And Dad left for an international business trip.  Josie was only 3 and she had no clue what had just happened but she communicated her confusion and upset by going on an eating strike and exhibiting really challenging mealtime behaviors.

Her behavioral therapist told me to make a simple visual calendar and to have Dad talk about where he would be going and how long he would be gone.  While he's gone, we cross off the days and talk about when he will be back.  We can also enhance the calendar with any other out-of-the-ordinary schedule changes such as visitors or parties.  Here is an example of one from August: 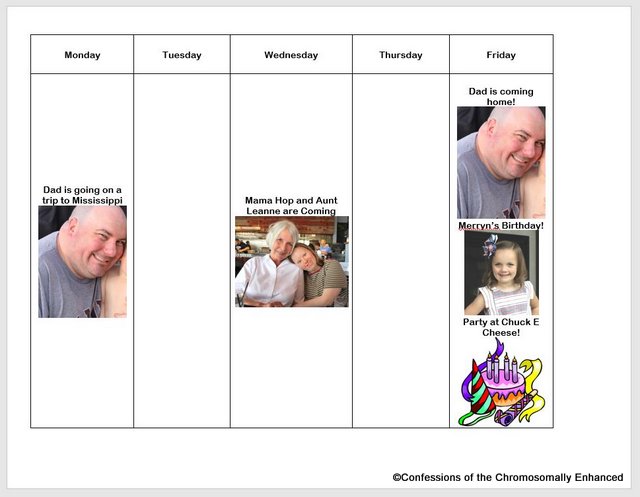 Likewise, with Kindergarten starting, we needed to step up our morning routine because getting up and out the door on a strict schedule is critical to the girls arriving at school on time.  Back in October 2015, I wrote a post about the chart that I made to help Josie understand the sequence of steps involved in getting dressed independently (click HERE).  We've been practicing that for months now and she can get dressed without the chart, although I think having the visual and moving the Velcro photos to the "ALL DONE" box is still fun for her.

In preparation for school mornings, I created a more comprehensive chart so that Josie could have a visual aid and follow the sequence of steps to get out the door in an efficient manner. 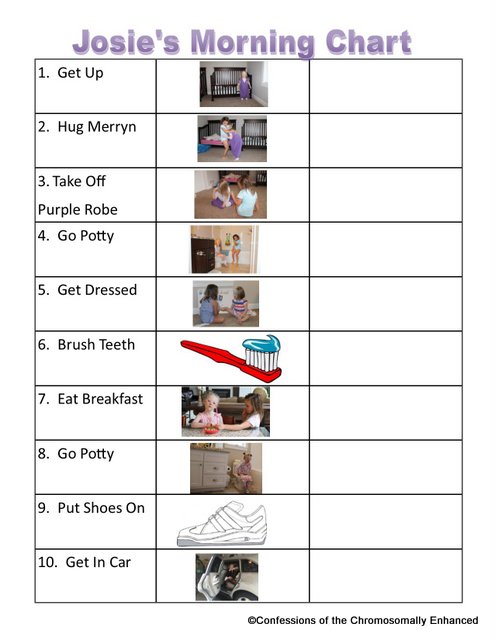 This was my initial attempt.  I realized that at Step 7, the activities are done downstairs and it really didn't seem necessary to haul the chart up and down the stairs so I revised the chart to include only the activities that occur upstairs: 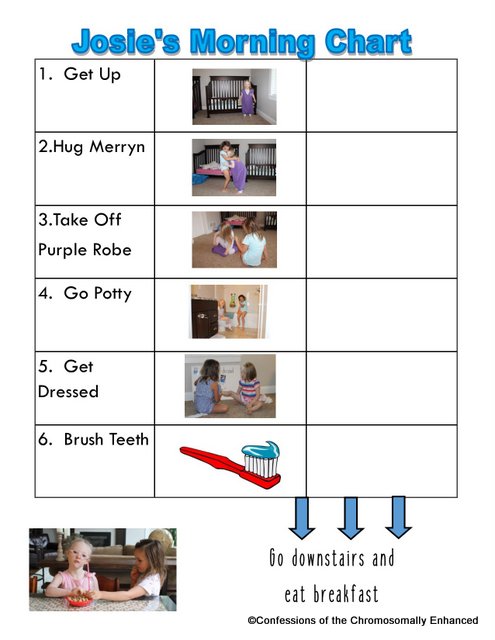 The "hug Merryn" step is something that is custom for Josie; she usually requires being beckoned with an open-armed embrace before she'll drag her groggy pajama-clad self out of bed in the morning.  Since Merryn is her roommate, and since Mother Hen is eager to help in whatever way possible, she volunteered for this job.

Josie earns Mickey-Mouse stickers for each step she completes.  After a week's worth of trial runs with this chart, I realized that laminating it and having reusable laminated "stickers" with Velcro on the back made more sense than killing trees and burning out our printer in the process. 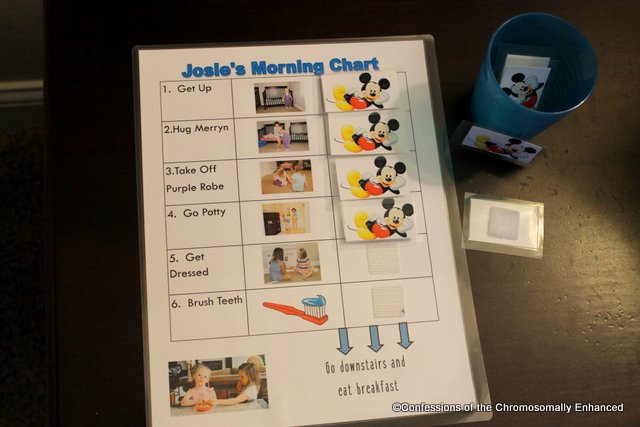 I use Microsoft Word or Publisher to create this documents.  I invested in a small laminating machine a few years ago and I even have a paper cutter.  But anyone with a piece of paper and a pen can make a visual aid document to help a child understand upcoming events.  In the past, Travis has pulled my paper calendar off the wall and drawn a cartoon version of himself and written "Dad is going to Germany" on his departure date and shown it to Josie.  It can be that simple.  The bottom line is that when you attempt to prepare the child for changes and transitions, he or she feels more confident in knowing what to expect. 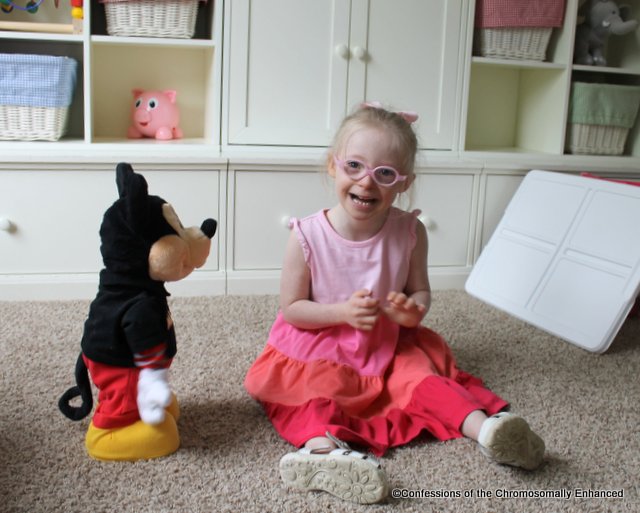 Stay tuned for the "Josie Goes to Kindergarten" social story post.
Posted by EN at 6:27 AM