Sunday, April 28th at 9:30am mass, Josie and Merryn both received their First Communion.  But this wasn't just an event that happened on that day.  A year (arguably a lifetime) of preparation went into this monumental occasion. 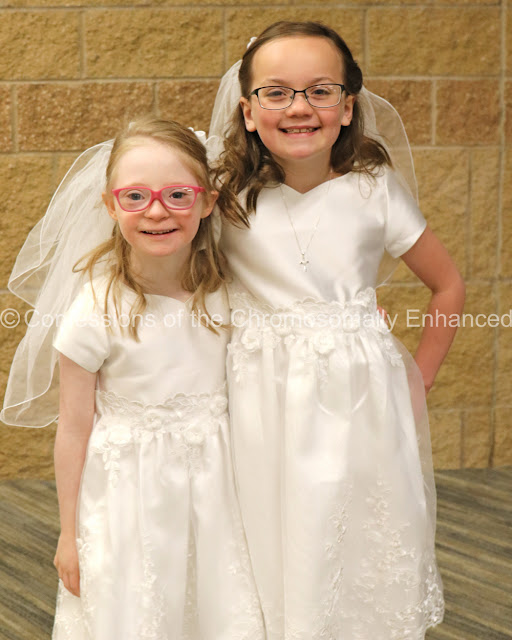 I remember the day I got the folder revealing the date of the girls' First Communion.  A lump lodged in my throat.  It's primary source was grief.  Of all of the moments for Mama Hop to miss...this one was a punch in the gut. 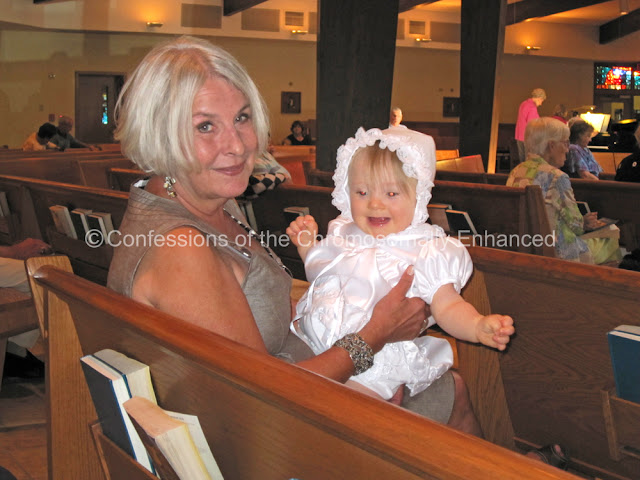 The secondary source of my anxiety resulted from Josie's history with food refusals resulting from G-tube dependency (You can read more HERE and HERE).  The host doesn't exactly taste like an Olive Garden bread stick.  But we had time and a wealth of wonderful clergy, staff, and volunteers to help us figure it out.

Every Wednesday night, the girls, Leanne, and I load up and head to church for Faith Formation classes.  Well, the girls go to class, Leanne volunteers in the nursery, and I man my prestigious bathroom post as hall monitor.  That's right, Folks: they don't let just anyone sit on a chair outside the bathrooms and bark commands like "I think that's enough soap!"  "Pick up that paper towel and throw it in the trash!" and "Stop loitering and get back to class!"  This is how I serve the Lord.

During Faith Formation, Josie is in class with the other second graders, aided by a wonderful associate named Brenda.  Brenda is an OT by day and a loving mother of two lovely teenage girls: Allison and Nicole.  These three have volunteered countless hours in our special needs ministry to help Josie and other children with special needs grow in their faith.

Josie learned the protocol quickly: Bow, "AMEN!" (perhaps the most enthusiastic one the walls of this stoic Catholic church have ever heard), and the sign of the cross.  And with a little incentive like a mini Oreo, Josie even consumed the host.  Hooray!!!  Things were going well!

...Until one day Josie decided she was done eating that host.  In fact, it was during a dress rehearsal at our home that she gagged, coughed, and spit out the unconsecrated practice host!

Just as Christ broke bread, gave it to his apostles and said, "Take this, all of you, and eat it: this is my body which will be given up for you," we celebrate communion because it nourishes God's life within us.  WE DON'T SPIT JESUS OUT!

In that moment, the grief, coupled with the g-tube PTSD, compounded by the pressure of the importance of this sacrament, left me paralyzed under the weight of crushing anxiety.  I spoke to our incredible special needs ministry coordinator and she encouraged me to have faith.  I tried.  But it was SO hard when they brought in a Board Certified Behavior Analyst who is pursuing her PhD, who pulled out all the stops, and Josie still REFUSED to consume the host.

But like I said, this was IMPORTANT.  And too many beautiful souls worked too hard to facilitate Josie's faith journey to let it be betrayed over the rejection of a dry Styrofoam-tasting cracker.  I asked if the priest could consecrate a Cheez It instead.

That was a negative.

So, I brought the girls home and drew from the most powerful weapon in my arsenal (besides God/faith, of course): STUBBORN.  Yes, I know "stubborn" is an adjective but just go with it.  Josie may have a whole extra chromosome full of STUBBORN, but Leanne does, too.  And she just happened to leave a little extra in the womb for me to utilize on occasions like this.  I was born for this!

So we prayed.  We read Josie's First Communion social story.  We practiced.  A lot.  And I reflected back on those long days at the feeding clinic with Josie, excavated every technique stored in the dark corners of my memory, and I went to work. 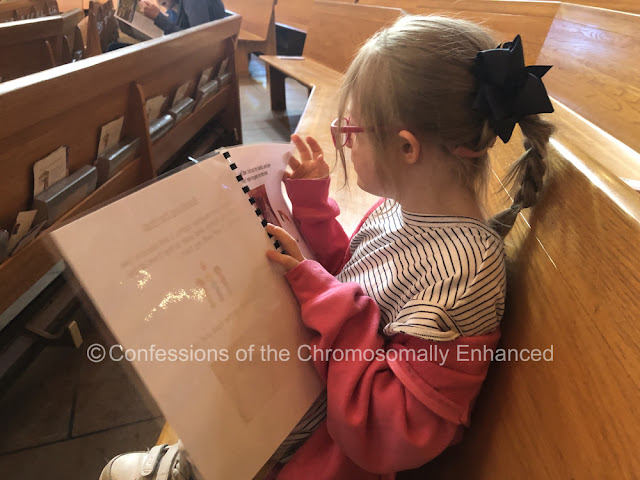 I got Josie to consume a piece of the host for me at the kitchen table using the same methods we employed to get her to learn to eat all food.  But in Applied Behavioral Analysis, there's a concept called "generalization" in which a skill learned in one setting can be applied in other settings.  Could we get Josie to generalize this skill?

Sweet Father Ray set aside some time on Saturday morning just for Josie.  Jess, the incredible special needs ministry coordinator joined us with her adorable daughter.  This was the moment of truth:  would Josie consume the host in the church for the priest? 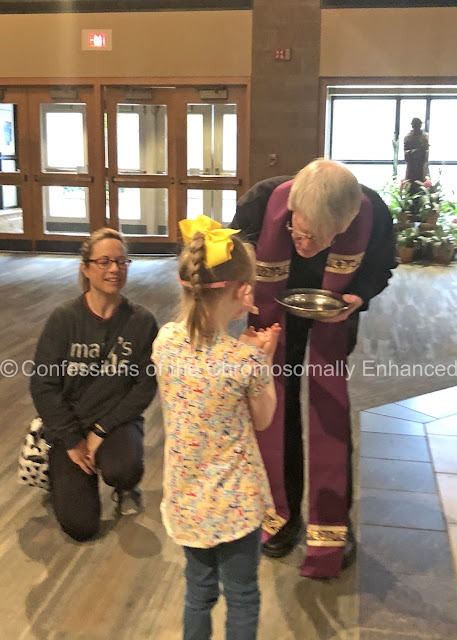 She did it!  And we celebrated with Oreo's.

Sunday morning, we got out of bed and adorned Josie and Merryn in their traditional First Communion gowns and veils.  My dear friend, Erin, came over and fixed their hair. 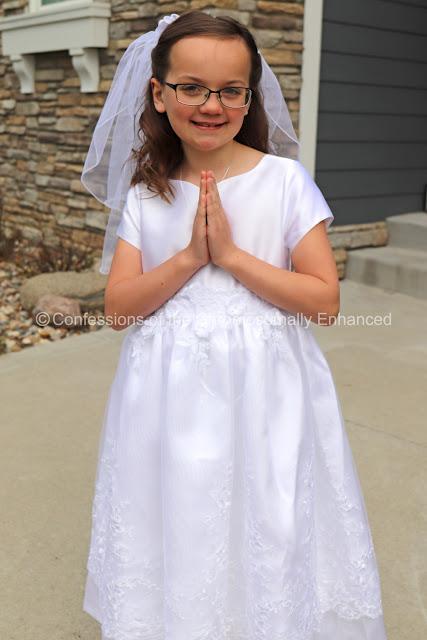 They looked downright angelic.  We headed off to church and met with the other first communicants, preparing to celebrate this holy sacrament.  We took the customary aunt-gets-niece-in-a-headlock photo and then found our reserved seats in the pew. 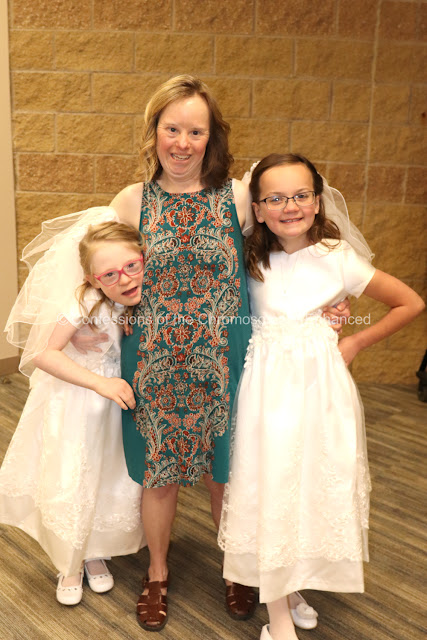 That morning was one of the most difficult mornings of my life, and it wasn't just because my Spanx were squeezing the life out of me.  Josie was in a foul mood.  She refused to stand up, sit down, and kneel, with the rest of the parishoners during mass.  She even defiantly kicked the kneeler, somehow injuring her shin, and dissolved into tears.  This wasn't looking good.  The cheerful, compliant Josie that had shown up to practice with the priest just the day before, was replaced by a combative little diva in a white veil perched precariously on her blond head, where Dad had awkwardly shoved in back in after the 20th time Josie had yanked it out.  I knelt in the pew with my hands clasped in white-knuckled prayer.

Communion time arrived and Merryn went first.  She was beautiful.  The moment was perfect.  She beamed.

Then, it was Josie's turn.  The special needs ministry director knelt next to the priest who held out a small piece of the host and said "Body of Christ."

Josie paused.  The seconds felt like an eternity from where I stood behind her.  But that's not what Jess experienced from her vantage point.  She said Josie gazed at the priest, she gazed at the host, then she gazed up at Jesus on the cross.  Jess said an aura of light flanked Josie's head as the silent pause was pierced by a smile and an enthusiastic "AMEN!"  Josie put the host in her mouth and took off.

I took my communion, looked up, and saw Josie bolting for the exit, all the while crossing herself and faithfully saying "In the name of the father, son, and holy spirit..."  I chased her down in front of a sea of amused faces and led her back to our pew.  Then I cried. 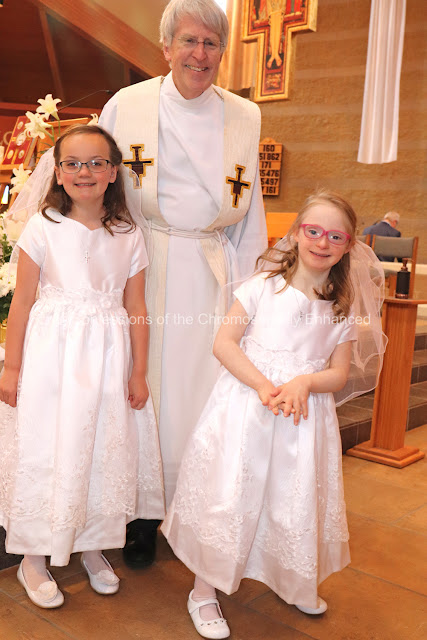 I don't know if this is "normal" (I can't stand that word) or not, but one of my biggest emotional triggers in the wake of my mother's death has been the kindness of others.  The reminders that I may be motherless but I am surrounded by loving people whose kindness humbles me beyond words.

People like my mom's friend, Gale, who sent me a birthday card and a Starbucks gift certificate, which landed me in a heap of sobs on the floor.  People like my mom's childhood friend, Karen, who sent Christmas gifts for the girls, knowing my mom wouldn't be there to do it. Church members like Brenda, Nicole, Allison, and Father Ray, who have walked this sacramental journey with us.  People like this phenomenal woman: 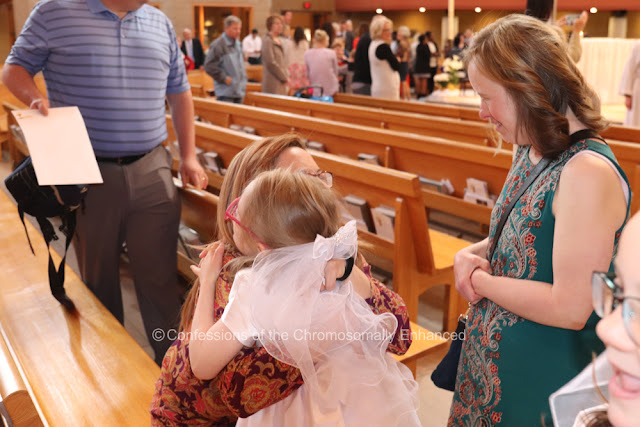 For Jess, the special needs ministry position isn't just a job; it's a calling.  She has a passion for facilitating opportunities for children with special needs to experience Christ.  She adapts her approach to meet each child on his or her own faith journey.  I'll never forget the first time she called me an invited us to attend Faith Formation.  We had just moved and I was barely getting by on the last frayed nerve I had left.  I explained to her that I was utterly overwhelmed with these little ones and could not commit to one more thing.  She empathized in the most beautiful way and told me she would be there when we were ready.  She kept in touch and made us feel like a part of the church in a way that no one else ever has.  The church is a family and the magnitude of that is amplified beyond measure when you've lost very significant members of your own family. 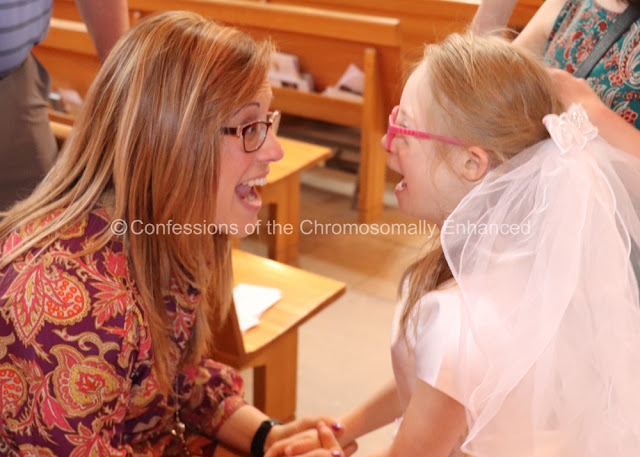 After mass, neighbors, friends, and complete strangers congratulated us.  The benevolence was awe-inspiring.  God's people were unified in His Love.  Christ's light shown upon us.  Mama Hop definitely joined in the celebration. 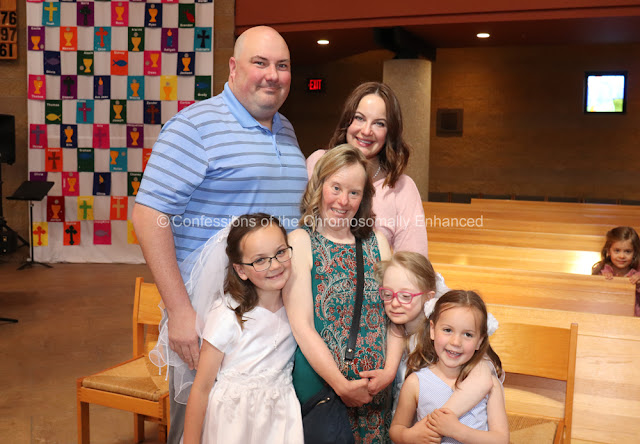