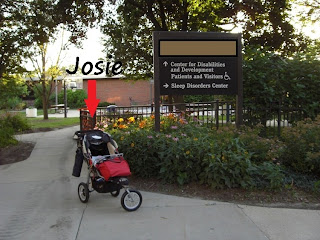 Last night we had the pleasure *ahem* of spending the night at the Sleep Disorders Center where a sleep study was performed on Josie.  In true Josie style, she laid there patiently as the sleep tech placed electrodes all over her head and body.  The crazy kid almost appeared to enjoy it. 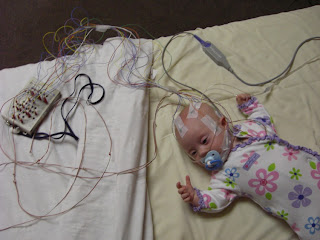 After she became high tech baby, she had a bottle and went right to sleep. 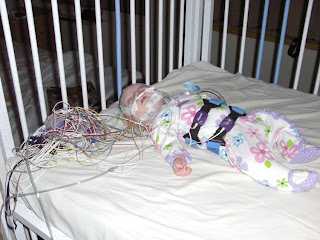 It's nice to know that at least one of us got some sleep last night. 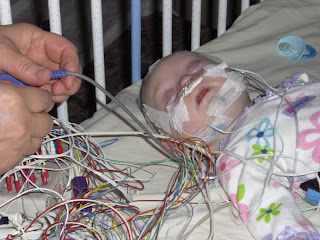 Piece of cake...until that super mean sleep tech whipped out this diabolical contraption known in the medical community as a CPAP. 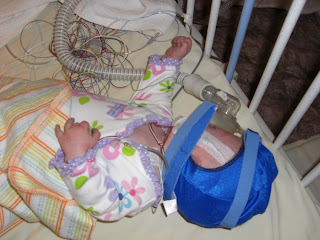 Josie was NOT amused.  Mom wasn't having much fun either.  Try sleeping with Darth Vader sounds coming from the foot of your bed.  Any volunteers?  I didn't think so...
As it turns out, Josie does have an obstructed airway (not exactly a news flash in light of the constant snorting and heavy breathing.  Hey - we think the piglet sounds are cute!)  Now we wait to hear from the doctor about the next step.
And just in case you don't believe me about what a laid back temperament this kid has, the proof is in the pudding:
The loud noise at the end of that video is the drop side of the Russian Orphanage-esque style crib falling on my foot. $%&#!
This morning Josie was deemed the best baby the sleep tech had ever worked with!  What did we do to deserve this kiddo?
Posted by EN at 7:29 AM