It's official: our adoption is finalized! "Josephine Leanne" is now legally Josephine Leanne and according to her new birth certificate Elizabeth is her Mama and Travis is her Daddy!  Isn't it funny that this happened on her 9 month birthday?  As Ya Ya pointed out, it takes 9 months to make a baby and in our case, it just happened to take exactly nine months to make an official family.
Lucky for us, Josie was in a much better mood this morning and she didn't bat an eye at the notion of putting on her fancy dress. 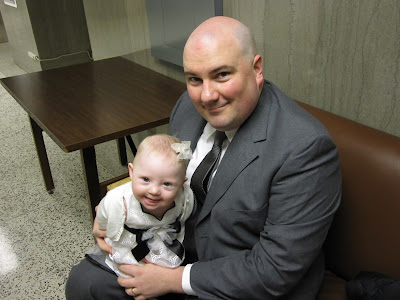 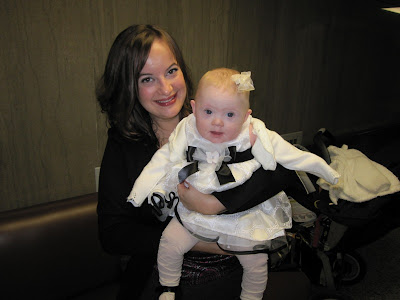 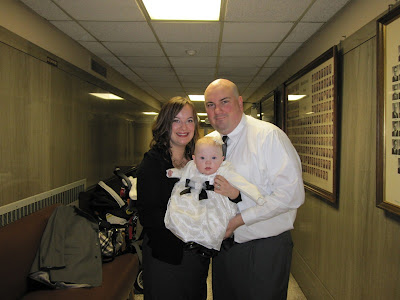 The judge even said Josie was the best dressed kid she's seen in YEARS!  Go Travis for picking out that snazzy dress and accessories!  The judge also gave Josie a little stuffed animal to congratulate her on her big day.  We will treasure it forever! 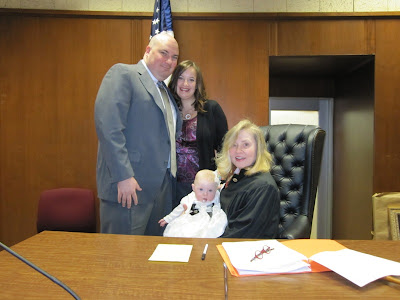 The morning was sheer perfection (unless you count the fact that I accidentally put my Spanx on backwards, sucking in my back instead of my belly but hey, if that's the only thing that went awry we're doing alright)!  The three of us have permanent smiles plastered on our faces.  This is the best Christmas gift we could ask for!
Posted by EN at 9:04 AM