Yesterday, I faced one of my biggest medical fears since having my wisdom teeth removed (and this time I had to do it sober): I learned to change Josie's Mic-Key button.  You see, I'm no medical professional nor did I ever aspire to be one.  And the notion of facing that gaping hole in her abdomen sends me running for the nearest commode!  I had to leave the room when Josie got her first Mic-Key button.  Lucky for Josie, her Daddy is a bit braver than I am.  However, the Mic-Key button is a fact of life around here for the time being, and if it were to ever come out accidentally while I was alone with her, I would need to know how to put it back in.
Yesterday morning, during mirror time, Josie gave me a little pep talk... 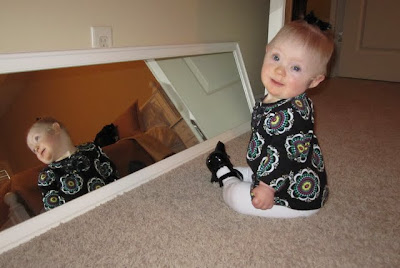 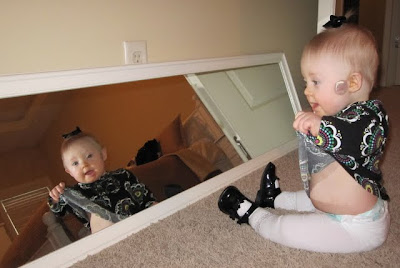 See?  You just lift my shirt up like this, deflate the old one, pull it out, pop the new one in the hole, and inflate it.  Simple! 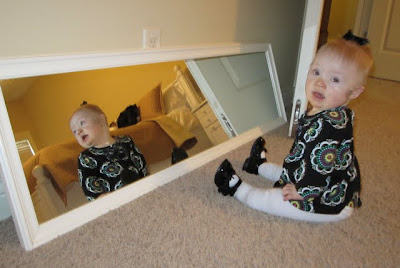 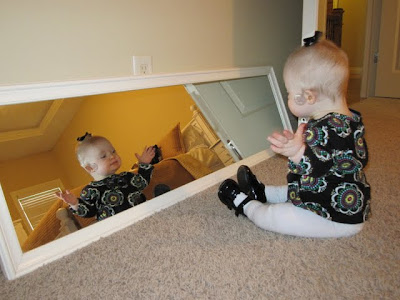 I don't know what she's so nervous about.  It's just a little plastic button in my belly.  For Pete's sake!
So, with Grammie Deb by my side for moral support (bless her heart), we headed off to Josie's appointment.  I resisted the feelings of queasy lightheadedness that threatened to consume me and derail the process and I followed the nurse practitioner's patient guidance.  Mic-Key Button 101 actually wasn't that bad!  Granted, the recollection of the hole in her abdomen still makes my stomach churn, but I prefer not to think about that.  Instead I am proud that Josie is the owner of a shiny new Mic-Key button.  And I can happily add "Mic-Key Button Installation Engineer" to my resume.
At the end of our appointment, the nurse practitioner said "So now that you have learned how to change it, do you even need a follow up appointment for me to change it in 3 months?" and before he could finish his thought I said "YES I do!  Just because I know how to change it doesn't mean I want to change it!"  The past 11 months with Josie has made me feel like an honorary medical professional but that doesn't mean I'll be going back to school to earn my nursing license anytime soon.  No sirree!
Speaking of Mic-Key buttons, I'm aggressively working to eliminate the need for that stupid button.  Teaching Josie to eat orally has been a lesson in patience.  She has made great progress but she's nowhere near where she needs to be to sustain herself without the feeding tube.
Upon learning that children with Down Syndrome benefit greatly from learning to use a straw, I purchased this nifty therapy cup called a Cip-Kup.  The Cip-Kup makes straw drinking easier because it has a lip block to prevent tongue thrust and it has a valve at the bottom that allows the fluid to remain in the straw once suction is released so it requires less effort than a traditional straw.  Like most of our great ideas, this was a recommendation from our favorite feeding tube graduate/oral feed mentor, Pudge! 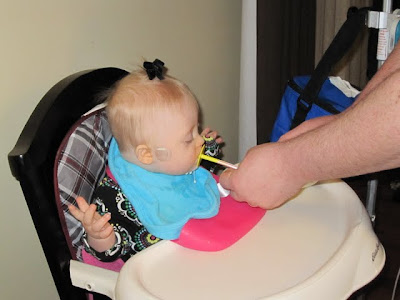 Josie is also working on chowing down on baby food.  She loves the vegetable risotto with cheese (thanks Mama Hop)!  She's not so crazy about the fruits but there's nothing wrong with being a vegetable fan, is there Travis?!  Ha! 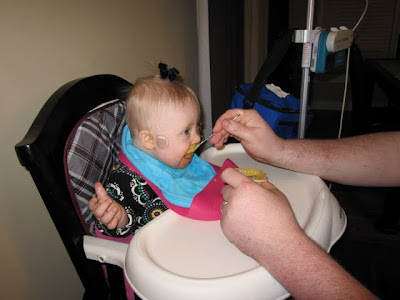 We're always receptive to ideas that can help facilitate the transition from being a g tube eater to an oral eater.  If anyone has a success story or would like to share a helpful tip, PLEASE email me or leave a comment!  ﻿
Posted by EN at 8:57 AM