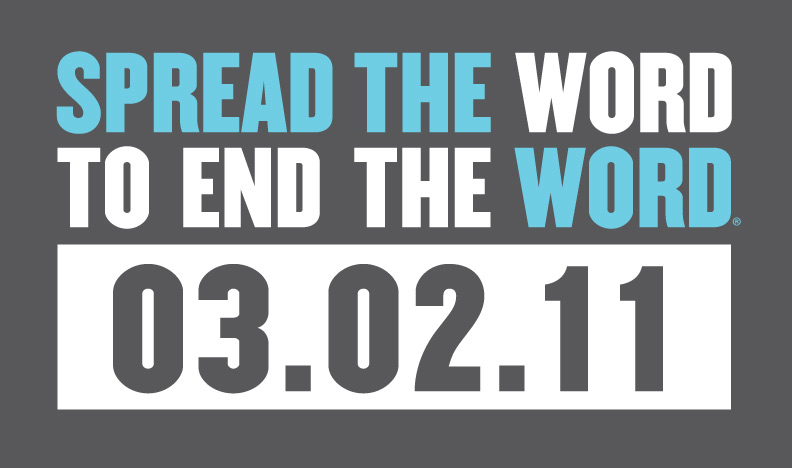 One year ago, in response to President Obama’s chief of staff Rahm Emanuel’s use of the word “retarded,” the Illinois Special Olympics released the following statement to the media:

Special Olympics Calls on Schools, Organizations and Communities to


NORMAL, Ill. – When you ask Special Olympics athletes about the R-Word, they will tell you about the hurt they have endured over the years being called “retard” or “retarded.” A movement began more than a year ago by Special Olympics International, led by youth leaders, to raise society’s awareness about the harmful effects of using the R-Word. A website was created so people of all ages can take a pledge not to use the R-Word at


www.r-word.org. The second annual day of awareness to Spread the Word to End the Word is March 3, 2010.


- Schaumburg High School’s three leadership classes will each create a marketing campaign to Spread the Word at their school – the winning idea will be implemented the week leading up to March 3.


- Mt. Greenwood School in Chicago ’s campaign led by the seventh-grade students will educate and rally support at two school assemblies where they will present a skit and solicit R-Word pledges on Feb. 26.


- Unit 5/Parkside Elementary School in Normal ’s fifth-grade class will present daily creative P.A. announcements (2/16-3/18) about the R-Word, solicit pledges, make posters, etc. The effort concludes with a one-hour school assembly on March 19 where students explain the effect of the project on them.


These schools will also have their students involved in the Special Olympics Young Athletes Program for children ages 2-7, helping with training and the Young Athletes culminating events in their areas this spring.
Spread the Word Resources are available from Special Olympics – go to www.soill.org for these links and information:

Barbara DiGuido, Director of Communications and Media Relations, received the following response from journalist Stan Zegal, Publisher of the Winfield Register and the Warrenville Sentinal:
Oh grow up!

I think you might feel differently if you had a child with Down syndrome or another intellectual disability,
Barbara

Which prompted Stan Zegel to issue this response:

Only if I was in denial and believed that magic words could reverse the condition. Otherwise the knowledge that another person is retarded alerts one to make allowances for unconventional behavior or substandard attainment. Some folks are not as smart as others or act in weird ways. It is quickly excused by others when the subject is known to be mentally retarded


Euphemisms just try to pretend that things are different from reality, and satisfy the weird beliefs of the Politically Correct Language crowd that everyone is entitled to go through life without having their feelings hurt, even by being exposed to truthful observations.

A person who cannot see is blind. There is nothing wrong with that, and there is no insinuation of blame to them if their condition is described as what it is. Blind. "Visually impaired" is PC but avoids the issue.
A person who cannot hear is deaf.
A person who cannot speak is dumb.
A fat person is fat. Saying that I am "barometrically challenged" won't make me thin.
A mentally retarded person is retarded. His mental development has been retarded by some condition. There is no blame implied, but it is a general description of the end result, which may arise from any of several causes.
A crippled person is crippled. No blame, just fact.

And ;yes, some people with certain behaviors are crazy. There are congenital or other medical abnormalities that may cause that antisocial behavior, but the result is still crazy behavior. Mothers who kill their children, terrorists, etc. come to mind.

This exchange circulated throughout the Special Olympics community and was met with outrage and disgust.  When it found it's way to my inbox, my blood was boiling but instead of replying out of blinding fury, I challenged myself to contact Mr. Zegel and explain this to him in a calm, dignified manner with the hopes that something I said may actually get through to him and allow him to realize just how misguided his remarks were.  Here is my email to Mr. Zegel:

Upon reading your essay on the word "retarded," I challenged myself not to react in anger but rather, to explain this to you in a way that may make sense and clarify the issue. My older sister has Down Syndrome but I don't consider her "retarded". You see, retarded is an all encompassing word that does not allow for exceptions. An individual who is simply "retarded" would be limited - period. And while I would agree that Leanne has her limitations, she is not entirely limited. There are many areas in which she excels. For example, Leanne is more friendly and charismatic than most people I know - she can make conversation with anyone. So her social quotient is not "retarded". Likewise, when you are upset or feeling down, she is the first person to pick up on that and try to comfort you. Her sense of empathy is not "retarded". Leanne says and does hilarious things all the time - her sense of humor is not "retarded". Leanne's bedroom is always immaculate - she has a place for every possession and a strong focus on maintaining order - her organizational skills are not "retarded"...

As you can see, I can go on and on about areas in which Leanne is not limited. Now, I admit, she needs some help in other areas. She has difficulty counting currency and sometimes she needs help understanding the concept of time. This is why we prefer to refer to her intellectual condition as having "Special Needs". There are certain tasks that require Leanne to take a little extra time and enlist in a little extra help. But trust me - Leanne gets through the majority of her day without any extra help. She is not "retarded".

I hope this sheds some light on the issue and allows you to understand why yes, a blind person may be blind without exception. They will never experience a moment of sight. But Leanne, completes many daily functions without an inkling of retardation. I hope in the future, you'll think twice before categorizing someone as wholly retarded and rather, stop to realize that this person has many abilities and a few "special needs." 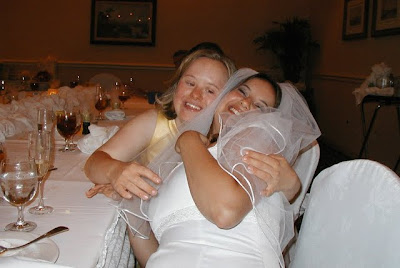