Josie and her sister, Merryn, are sixteen months apart.  When we became pregnant with Merryn, the timing surprised us a bit.  However, many people within the special needs community, including Josie's therapists, assured us that this was the best possible thing for Josie.  We were told that having a sibling so close in age would motivate Josie to reach her milestones alongside her sister.  Sibling rivalry would be a good incentive for Josie to work harder to keep up with her sister.  We were also told that because I was tending to a baby, I would not have as much opportunity to "baby" Josie, thus, making her more independent and self-sufficient. 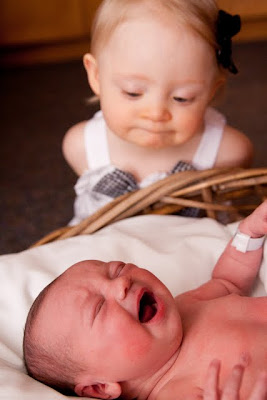 However, this theory seemed to have backfired a bit.  As Merryn's gross motor skills began to develop, Josie utilized this to her advantage.  We've all seen Merryn pushing helping Josie in her gait trainer... 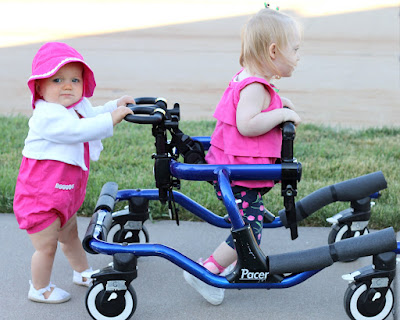 ...although she doesn't look too happy about it here. 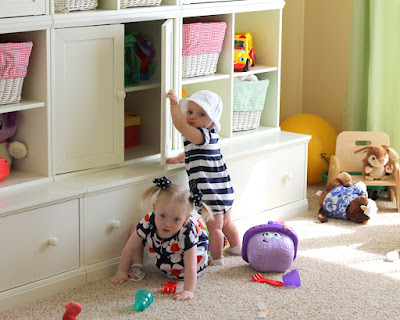 When Merryn began to pull up and cruise along furniture, Josie simply sat back and let Merryn pull toys down for her. 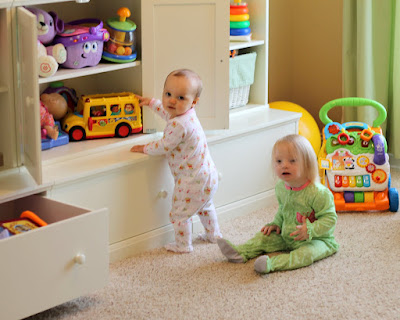 No, not the school bus!  I said the singing dog!  Geez, Merryn - listen!
Josie is delighted to sit and relax while Merryn does all the climbing and heavy lifting!﻿ 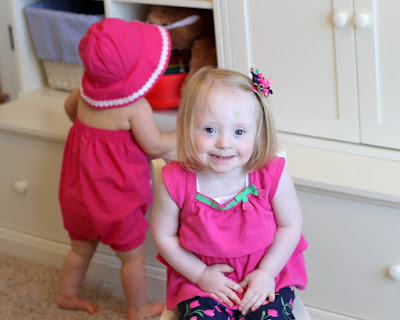 And the thing about Merryn (and typically developing kids) is that the skills that we've worked tirelessly - for months and months and months - to teach Josie, simply come naturally to Merryn.  She just started pulling up, cruising, and climbing the stairs.  No one really taught her or drilled her over and over with countless exercises.  Admittedly, the contrast between the two can be a little discouraging.
However, all the effort that goes into teaching Josie new skills, and all of the energy spent, and even the discouraging moments, make victory so sweet!  Fast forward to last Friday when I heard Josie whining in the playroom.  I poked my head around the corner to see what the problem was and I saw this: 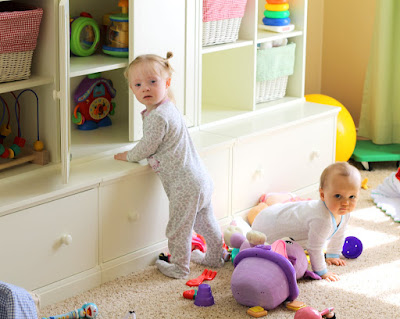 I shrieked in excitement "Josie!!!!  You pulled up!!!!!"  and I ran and got the camera.  What seems like such a small thing for most kids (I honestly don't remember when Merryn first did it) is a huge step for Josie.  I clapped and cheered and made her do it again!  Then I emailed/texted Travis, her grandmas, and her physical therapist!
Of course this is not demean Merryn's accomplishments in any way.  We are truly proud of her as well.  But Merryn is 10 months old and Josie is nearly 27 months old, so it's taken her that much longer to conquer this skill.
Small accomplishments are big deals when you have a child with special needs. 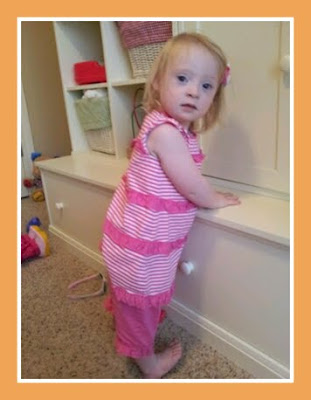 Three cheers for small victories!
Now, if she can only figure out a better method of getting down besides standing there whining for someone to come help her.  Stay tuned!
Posted by EN at 10:41 AM