A Must-See Documentary about Down syndrome

Travis & I stayed up late last night talking on our patio.  We got into a conversation about Josie's future; we discussed our ambitions for her and the opportunities that are currently available and how much things could change in twenty years.  It reminded me of a wonderful documentary I watched and I can't believe I never blogged about it before.  The documentary is called "Monica & David". 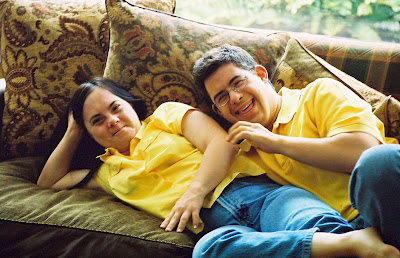 It's about a real couple with Down syndrome who get married and build a life together.  When I found out about it, I made Travis subscribe to HBO so I could record it.  Two years later, it's still on my DVR.
What I got the biggest kick out of were the similarities between Monica and Leanne.  I joked that you could play a drinking game for every time Monica said or did something that Leanne does.  For example, at the end of the film, Monica and David go out to a restaurant to celebrate their first anniversary together.  Upon receiving a complimentary dessert, Monica requests that the staff sing to her and David.  The next thing you know, a small group of servers are gathered around the table awkwardly singing "Happy Anniversary to you" to the tune of "Happy Birthday".
It made me laugh because a few years back, Leanne insisted on having her birthday meal at Chili's.  After making a big deal about how it was her birthday, the server brought her a bowl of ice cream.  Leanne looked up at him and said, "Aren't you going to sing?" and this rather introverted, soft-spoken server who was about 16 stuttered, "Uh, we don't really do that here."  To which Leanne emphatically replied, "But it's my birthday!"  I have never seen a teenage guy turn so many shades of red as he stood in front of the glaring eyes of a roomful of restaurant patrons and did a bumbling  solo performance of "Happy Birthday" upon Leanne's insistence.  I wouldn't be surprised if he never showed up for work again.
But I digress..."Monica & David" is an awesome documentary that delves into issues facing adults with Down syndrome including dating and marriage, socialization, finding employment, health struggles, and establishing independence from parental control.  Here is the official movie trailer:
You can find out more at these websites:
http://www.monicaanddavid.com/
or
http://www.hbo.com/documentaries/monica-and-david#/documentaries/monica-and-david/index.html
(which includes extra video clips and deleted scenes)
Posted by EN at 3:16 PM