We interrupt your regularly scheduled programming...

...to extend a big "Welcome home!" to Dad, who spent the last eight days in India on a business trip.  Granted, we're trying to stay focused on Down Syndrome Awareness Month, and this really has nothing to do with Down syndrome, but it's a pretty big deal in our house.
As soon as Dad walked in, both girls ran straight into his arms! 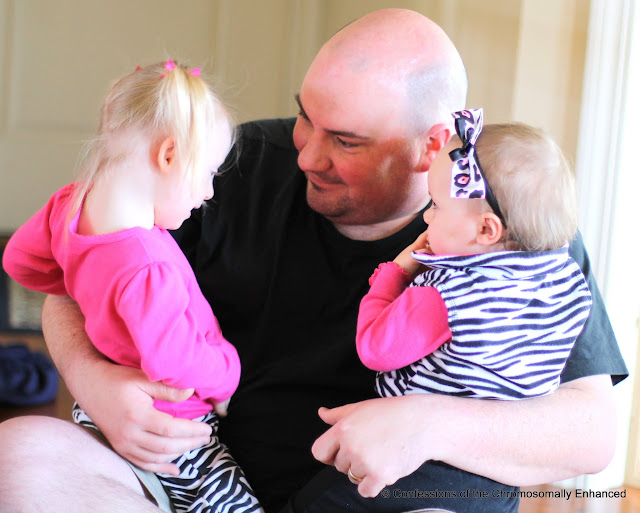 Because Love Machine (their dearly departed souvenir from Dad's last trip to India) was such a huge hit, the girls couldn't wait to see what Dad brought them this time:﻿ 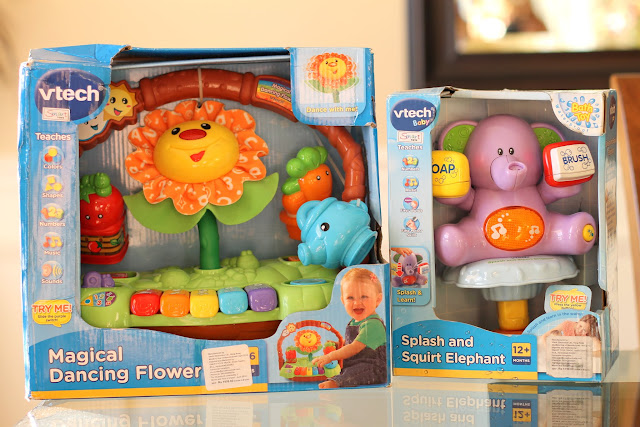 Dad was apologetic about the lack of Indian authenticity, but his shopping options were limited.  This reminds me of the time he brought me wine from Germany - it was actually from Italy but the label was in German :-)  After a little Googling, it appears as though these Vtech toys are not available in the US and they differ from our other toys because they sport a British accent - spot on!
Not like the girls care where the toys are from.  They only care about the turf tug-o-war!
﻿ 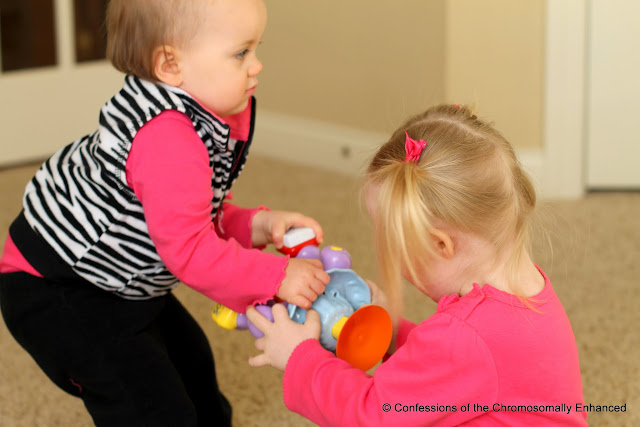 Merryn lost this round.  Her response: turn to mom sporting her best "That's not fair!" face and adamantly exclaim "Mo!" while signing "more."﻿ 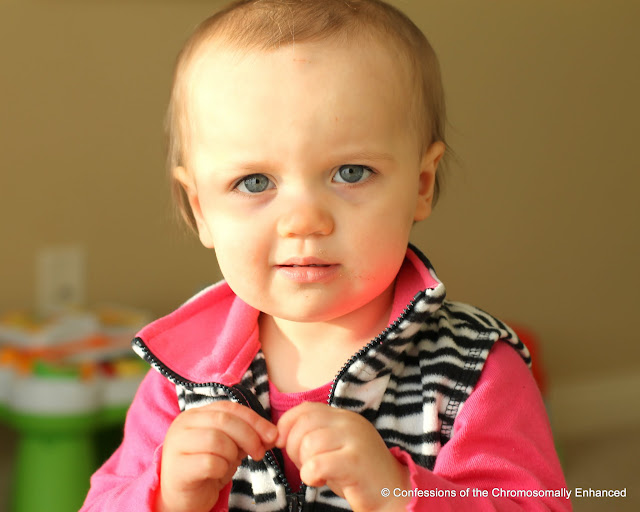 She rallied and went back for round two... 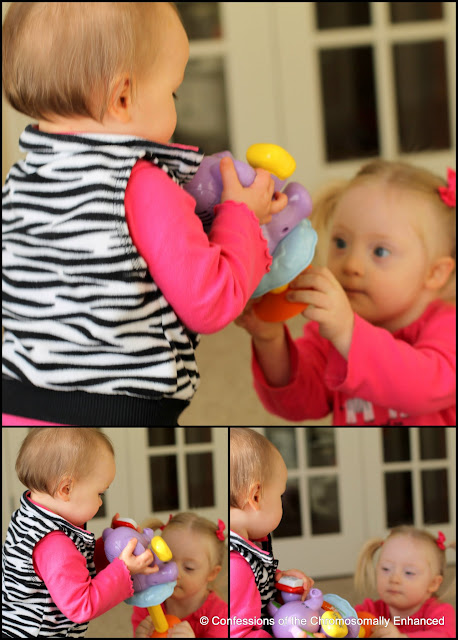 Her perserverence paid off and she emerged victorious!
Just look at that smirk! 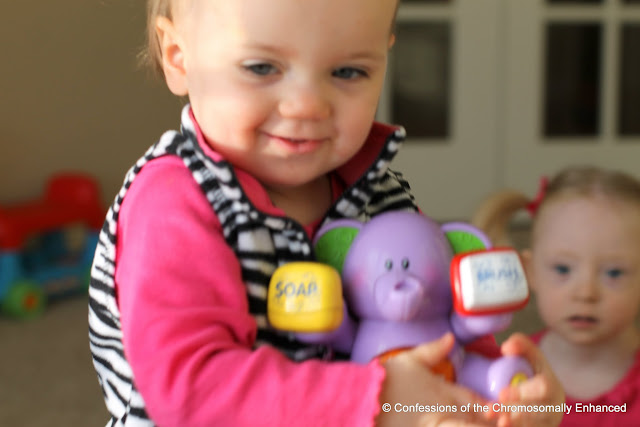 By this point, Dad was able to free toy #2 from its packaging and tranquility was restored. 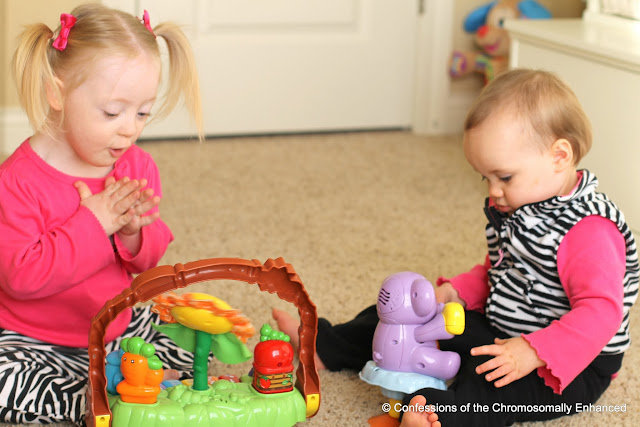 Later in the day, Mom had a parenting gaffe that is undoubtedly the first of many: Josie held up the Dad figurine from her doll house, pointed between his legs, and said "Lady bits!"
Yes, that's what yours truly taught her to call her anatomy.  *Cringe!*
My response: "No, that's a boy.  He doesn't have 'lady bits,' he has...um...boy parts!"  She promptly repeated this new terminology and I was immediately filled with doubt that I'm leading her down the wrong path here. 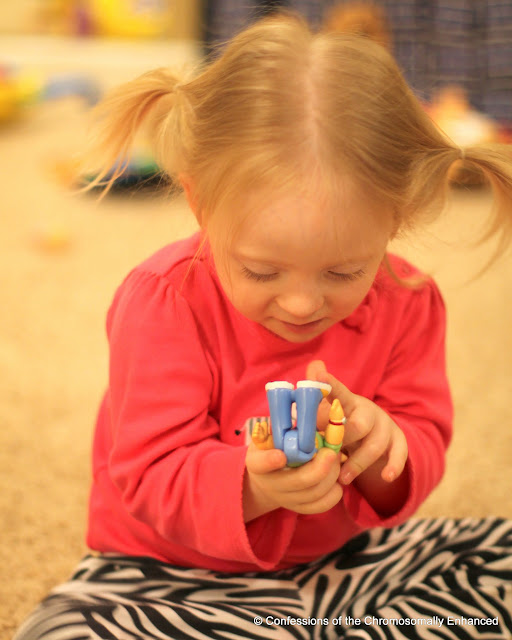 Deflated pigtails brought to you by her sister's newfound affinity for hair-pulling
When I appealed to my beloved husband for advice, he shrugged and said "You go ahead and make these decisions.  I'm here to support you!"  Gee thanks.  After texting a few parent friends, it seems as though the concensus is that Josie should learn the clinical terms for those body parts.  *Cringe!*  The problem is that Josie is so into labeling!  People come into our home and take off their shoes and she immediately points to their feet and says "Socks!" It's nothing for her to point to their eyes and say "Glasses!"  Girlfriend even tries to lift up shirts to locate people's belly buttons!  The last thing I need is for her to point to peoples' crotches and say...ugh!  I can't even type it!
This is one of those moments that Travis likes to call "Amatuer Hour".  Kind of like when you don't clamp the tube before opening the port even though you've done it hundreds of times in the past...or for those that don't understand G tube anaologies, it's like leaving the opened bag of Goldfish crackers too close to the edge of the table.  What do you think is going to happen?!  Amatuer Hour!
Granted, parenting is an learning journey; a journey of trial by fire, trial and error, throwing-it-against-the-wall-and-seeing-if-it-sticks...and every other cliche for "I-have-no- idea-what-I'm-doing-but-I'll-figure-it-out-as-I-go".  Perhaps today was a failure.  There's always tomorrow!  Maybe my anatomy instruction will gain proficiency by then!