It's been a rough week

Once again, our absence from the blogosphere is illness induced.  A week ago, Josie awoke with what appeared to be an unpleasant stomach bug.  After laying lifeless in her "sick chair" (bouncy seat covered with towels), shooting up only to vomit, cry, and then returning to her pathetic state, we were naturally concerned.  However, by that afternoon, she seemed to perk up and the vomiting stopped.  We were super relieved...

...until the uncontrollable diarrhea (sorry, just being honest here) caused numerous clothing changes every day.  And the vomiting returned in brief episodes here and there.  After a couple of phone consults with medical professionals, we were told that she would be fine as long as she remained hydrated.  However, by Friday, I was losing my mind with worry and Travis was losing his mind over my heightened neurotic state, so we took her to her GI doctor. 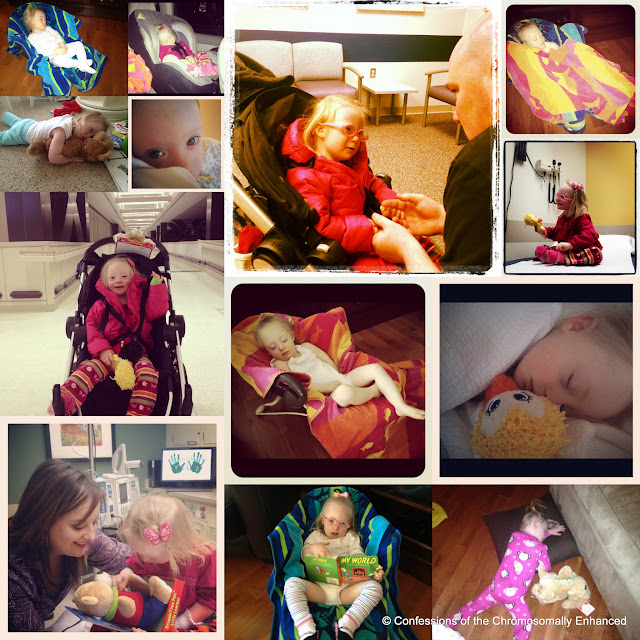 After an agonizing IV placement (heartbreaking to watch Josie scream like that), she earned herself a new singing animal from the child life specialist!  But the best part of the whole ordeal was the simple act of dad's bubble blowing which prompted the return of a rich vitality that was so desperately missed.  Check out this cuteness:
Bubbles popped in my face!!!

Right now, Josie is resting with her chicken in her sick chair and we were told to contact the doctor if this "stomach bug from hell" hasn't passed by Monday or Tuesday.  So if you don't hear from us, it's due to the demands of a sick little girl, the constant barrage of soiled laundry, the needy cries for attention from the neglected baby sister, oh yeah - and the standard holiday demands including Christmas shopping, gift wrapping, and-let's-not-even-talk-about-the-50+-Christmas-cards-that-mom-hasn't-even-started-writing-that-will-likely-become-Valentines-Day-cards-if-this-doesn't-let-up-soon...ugh!  I can't even think about it!  I have lots of great pictures to share because Mama Hop and Aunt Leanne were kind enough to visit not once, but twice, to lend a hand during this stressful ordeal but duty calls so this must be cut short.

I'll try my best to post an update as I can.  It's been a whole lot easier for me to post to Instagram so if you have the app, you can find us at: CatfishWithKetchup.

Any prayers you can send up for Josie would be greatly appreciated.
﻿
Posted by EN at 10:01 AM