There is a stereotype that people with Down syndrome are very affectionate, and in my experience, this holds true; especially as it pertains to Leanne and Josie.  I have early memories of Leanne getting lectured about NOT hugging strangers in public places.  As a young child, she would just run up to anyone waiting in line at the grocery store check out and throw her arms around their legs.
Likewise, Josie frequently greets strangers with an emphatic "I love you!" instead of the traditional "Hi, nice to meet you".  We're talking everyone from a new speech therapist, my financial advisor, or the x-ray technician at the hospital.  Josie is also liberal with her hugs and kisses which has forced us to institute a new policy around here: We don't kiss on the lips because that's germs - ick!  I truly never know what random acquaintance Josie will plant one on next! 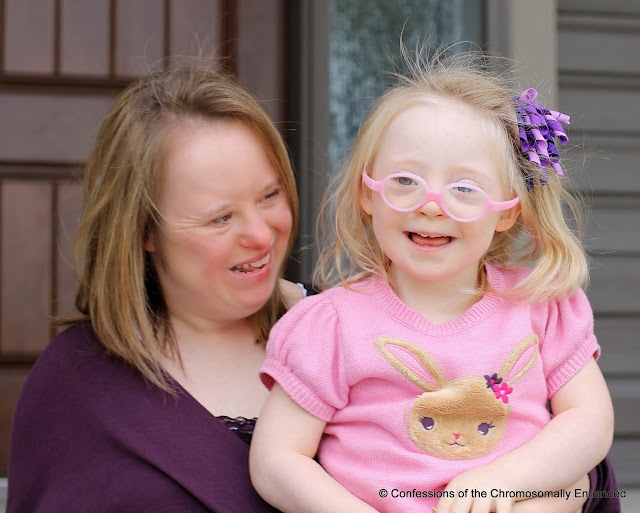 So you can imagine what it's like when Josie and Leanne get together.  We're talking two people who never tire of the other's undying urge to offer heaping helpings of affection.  It's one big, cute-bordering-on-nauseating, I love you/I pray for you/Move In!/Okay!/You're so pretty/You're the best/I love you, I love you, OH I LOVE YOU hug fest!

According to Josie's Occupational Therapist, we're supposed to be teaching Josie to restrain her urge to drench affection upon everyone she encounters.  Travis' reaction: "She's only three!!!  It's cute!"  There's a part of me that agrees with him.  I find that most people relish in Leanne and Josie's lovey-dovey tendencies.  These uninhibited ladies' outpouring of love, praise, and compliments has undoubtedly made the day of many folks.
However, I know that Josie won't always be a tiny tot and she will need to learn socially appropriate behavior.  Leanne has this exercise where she holds her arms out in front of her and declares "personal space," and she remains at least an arms-length away from people.  If she forgets, we just have to utter "personal space, Leanne" and she steps back.  So where is the line between allowing Josie to express herself freely vs. teaching her to conform to social norms?  At what age and how do we teach Josie restraint?
Truthfully, I haven't figured it out yet.  Naturally, like Travis, I'm a little biased.  But I also understand that Travis can't exactly walk into a meeting at work and greet his colleague with an emphatic "I love you!" along with a bear hug and a kiss on the lips.  So, it probably isn't okay for Josie, either.
But even if we have to temper Josie's enthusiasm, she'll always have the open arms of Aunt Leanne to run to, and that is a beautiful thing.
Posted by EN at 5:50 AM