Cue the Mormon Tabernacle Choir: look who just walked in!  As Josie would say "It's DAD!"  Yes, it is.  After wrapping up his second international business trip of the month, we are delighted to report that Dad is home (even if he does kind of smell like he's been traveling for 36 hours straight)! 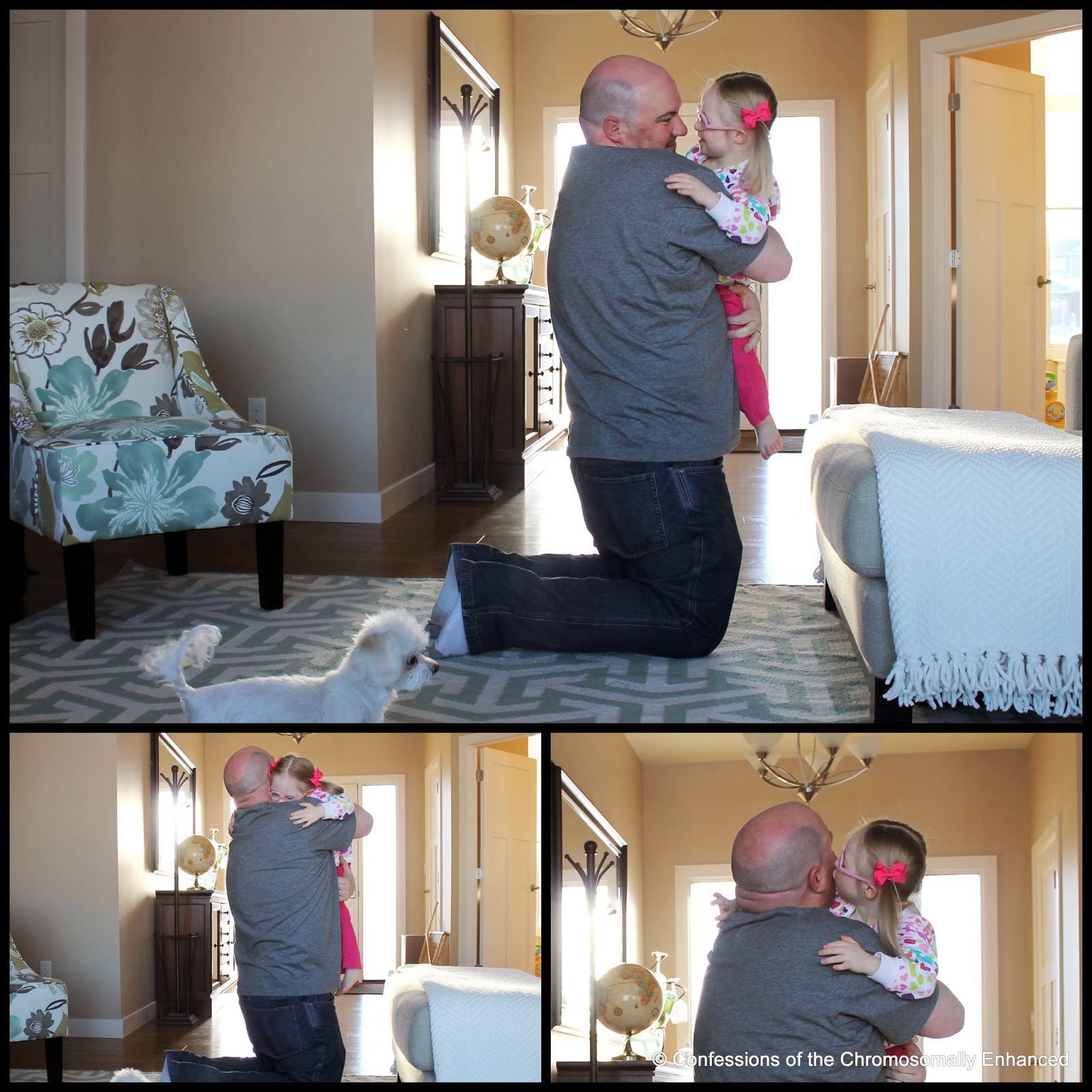 Merryn has recently taken an interest in geography and she loves to spin the globe and identify the locations that she's learned.  It seems to offer comfort when she misses her dad.  Here she shows us where her dad has been:

And you know Dad wouldn't ditch us for that long and return empty-handed.  No sirree.  He knows those airport gift shows aren't just for browsing to occupy time between flights.  There are four and a half girls at home (if you count our dog and unborn child occupying my uterus) just waiting to see what treasures Dad picked up along his journey.

In true Merryn ("functional firstborn") form, she retrieves the gift from Dad, gently tears a corner of the paper to help her sister get started, then she holds the package in front of her sister - mind you, refusing to actually hand the gift to her sister - then she gently encourages Josie to remove the wrapping. 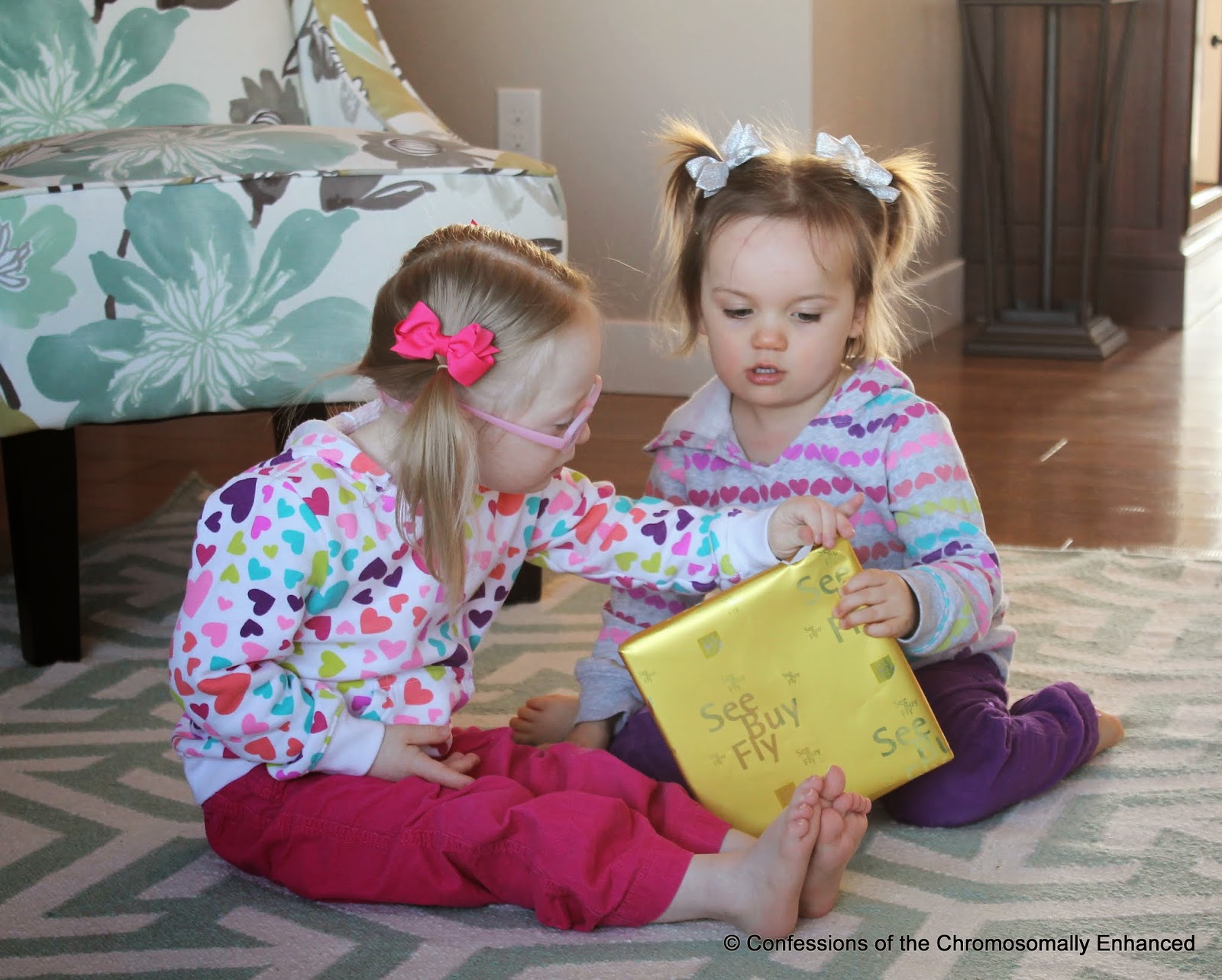 As soon as the literary introduction to Dutch vocabulary is unwrapped, Little Miss Bossy Pants holds the book and "reads" it to Josie. 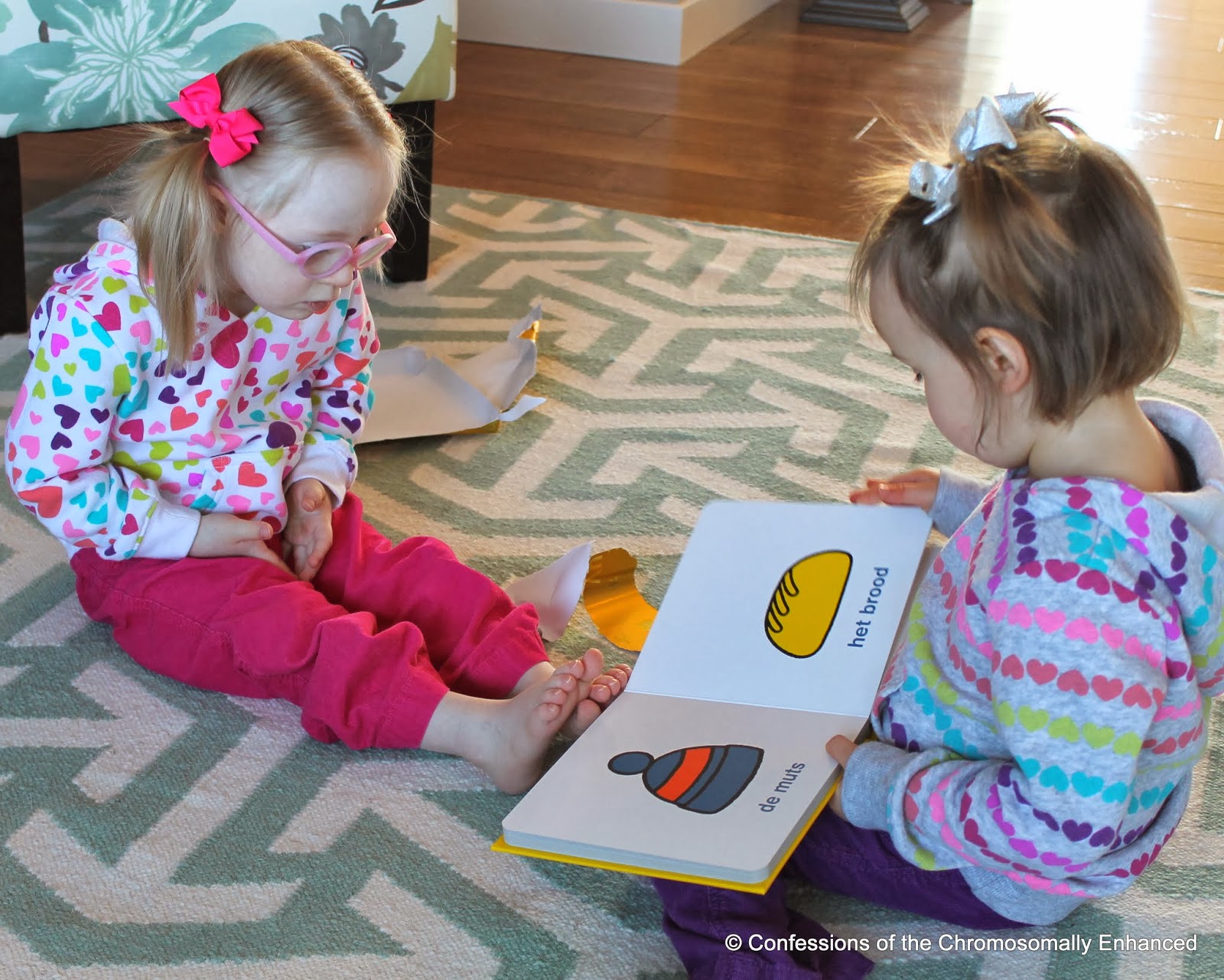 Then it's time for the grand finale of souvenir distribution: Dad unveils a neon green rooster who dances around and sings the most auditorily offensive tune so loudly it can be heard from any room in the house.  Josie loved it.  However, after about 10 minutes straight of the same screechy melody playing on repeat, Merryn came running in our room, demanding we turn it off.  Girlfriend couldn't handle another second of it and honestly, who could blame her? 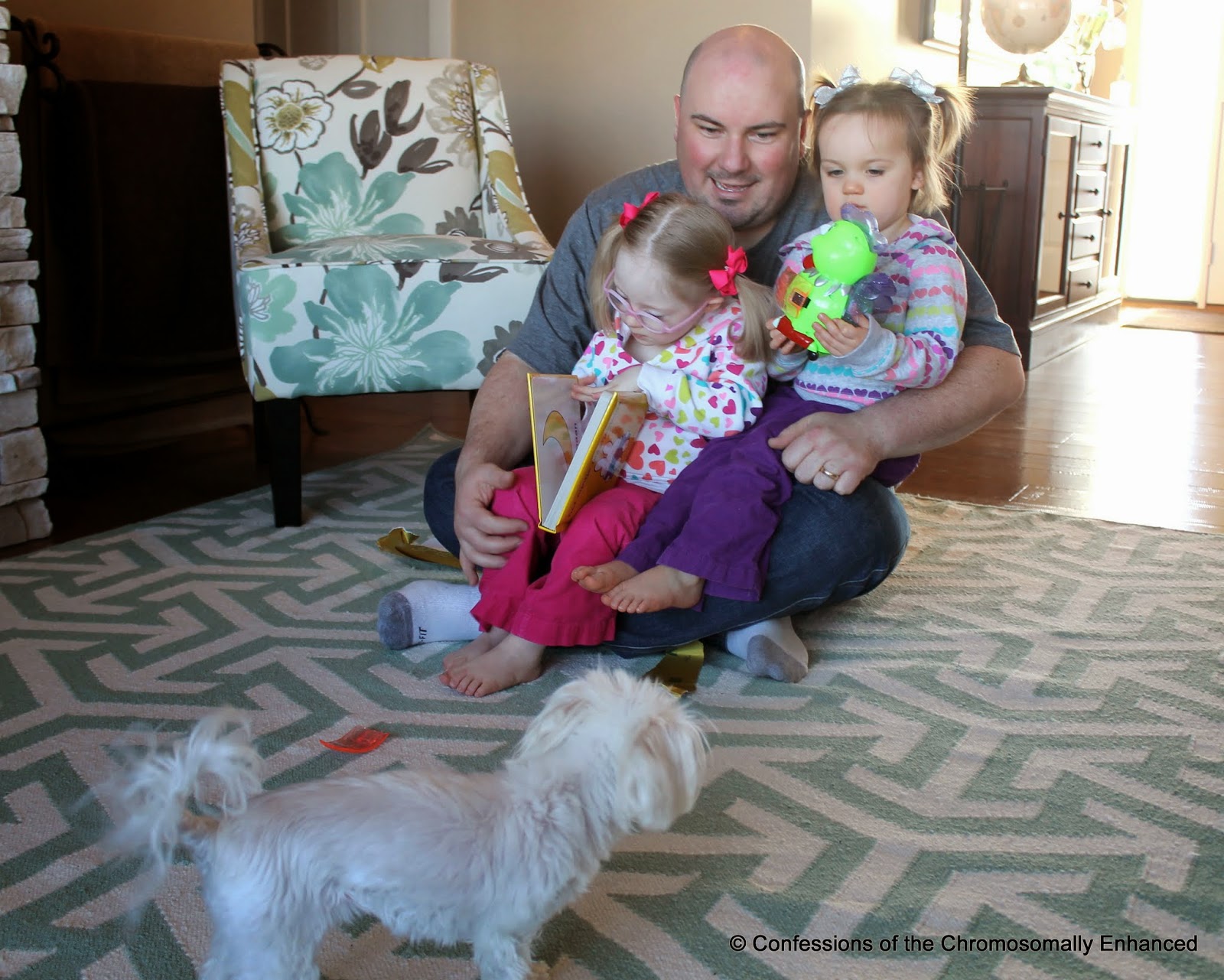 Of course my sweetie didn't forget his beloved wife, pregnant with two toddlers, who had been single parenting solo in the dead of winter in the tundra.  The one really cool thing about Dad's global travel responsibilities is that he has access to some fabulous shopping that is only available in larger metro areas.  This month's travels were good for gift sets from both L'Occitane and Mac Cosmetics - neither of which is available locally.  When I commented on his insightful cosmetic color choices he recounted a story to me about how he approached a lady who worked at the Mac store in the Amsterdam airport and stammered "Uh, do you have any lip gloss?"  LOL!  Can't you just picture it?!  Even though he doesn't have a feminine bone in his body, Mr. Practicality is happy to indulge in my obsession with cosmetics and skincare because the items are small and take up minimal room in his luggage.

Thoughtful gifts notwithstanding, it's never easy to be without my better half for that long.  In true Murphy's Law fashion, we always seem to encounter more obstacles when he's halfway across the globe.  Last week, Josie ran a fever of 103 at 8pm on a Sunday night.  After pulling up her medical records and realizing how serious her health history has been, the phone nurse told me to bring her to the ER immediately.  Pregnant mama, two toddlers, dead of winter in the Arctic Circle, blizzard conditions, 8pm trip to the ER?!  No thank you!  After the nurse insisted I speak with the doctor on call, we agreed it was in Josie's best interest to avoid the RSV-ridden ER at all costs.  Which left mom waking up every 4 hours to check her temperature and oxygen saturations and administer Tylenol via g-tube.  It was rough.  But we are so grateful because as we've seen in the past, it could have been much worse.

And that's why these occasions always make me stop and reflect in complete admiration for the military wives and single mothers out there who deal with these challenges solo day in and day out.  While it's an empowering feeling to know you can handle it, it can't trump the relief of seeing Dad's smiling face walk through the door.  Welcome home, Dad.
Posted by EN at 6:32 AM