Siblings: The Impact of Special Needs on Birth Order

I am frequently asked what it was like growing up with a sibling with special needs and that is a really difficult questions to answer because 1. It's just a BROAD question 2. I don't have any typically developing siblings so I don't really know any different. 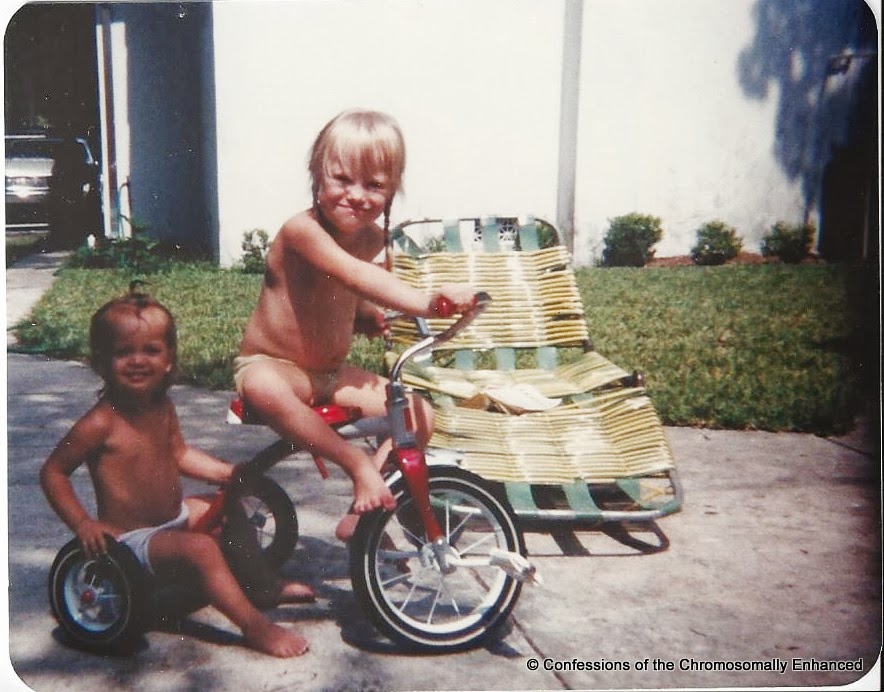 As I watch my daughters grow and interact, I identify so much with Merryn and I realize that there are many similarities, but there are also distinct differences.  For one, Leanne is three-and-a-half years older than I am, where as Josie is only sixteen months older than Merryn.  Merryn caught up to Josie's developmental age a lot sooner than I did with Leanne.  Consequently, I think Josie and Merryn switched birth order roles much sooner than Leanne and I did.  What do I mean by birth order roles? 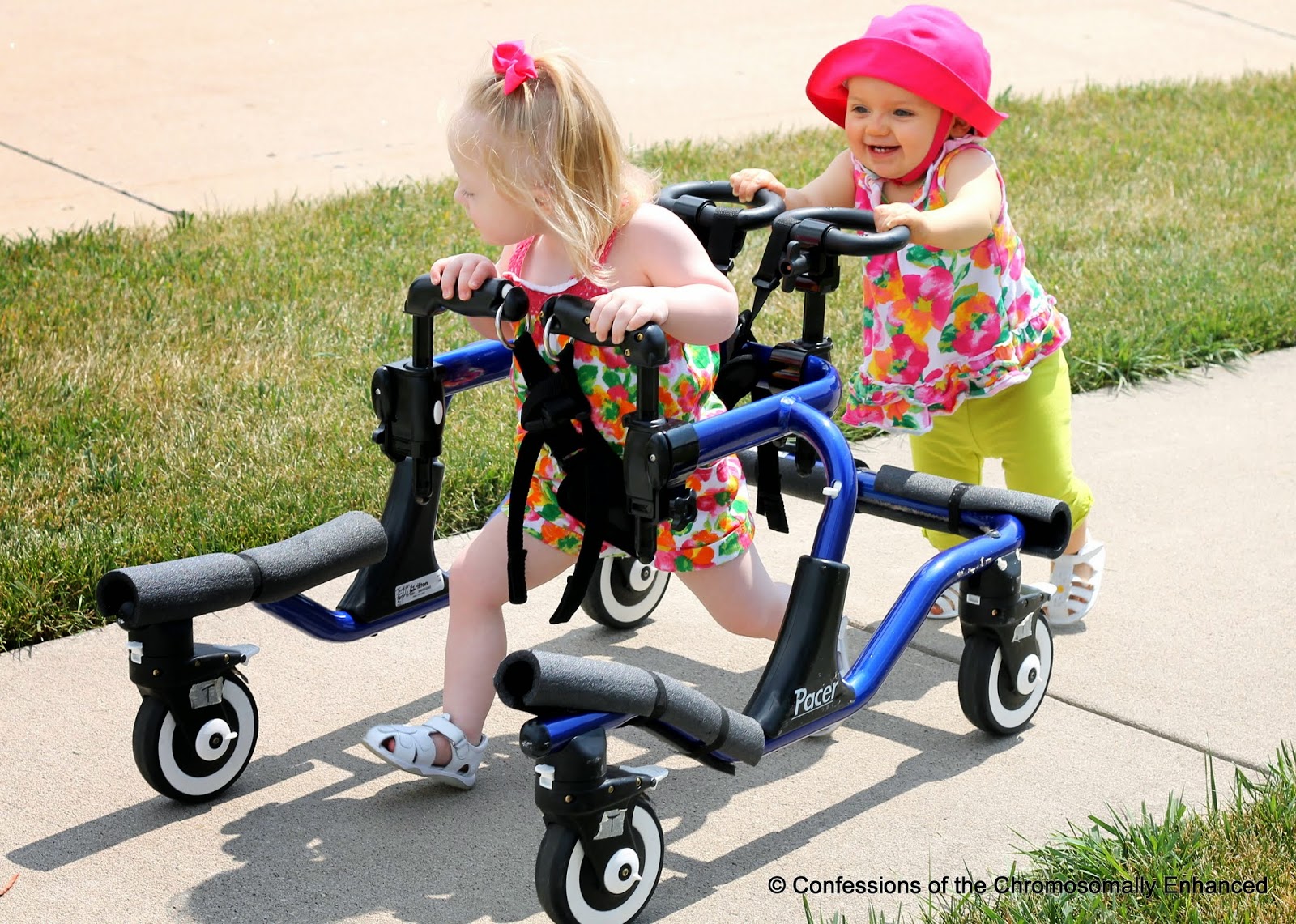 Many people subscribe to a theory that birth order dictates personality traits (source).  For example:

What happens when you have an older sibling with special needs is that you become what is known as a "functional first born" - in other words, you tend to take on more traits of a first born regardless of your actual birth order.  This definitely happened for me and it's already happening for Merryn. 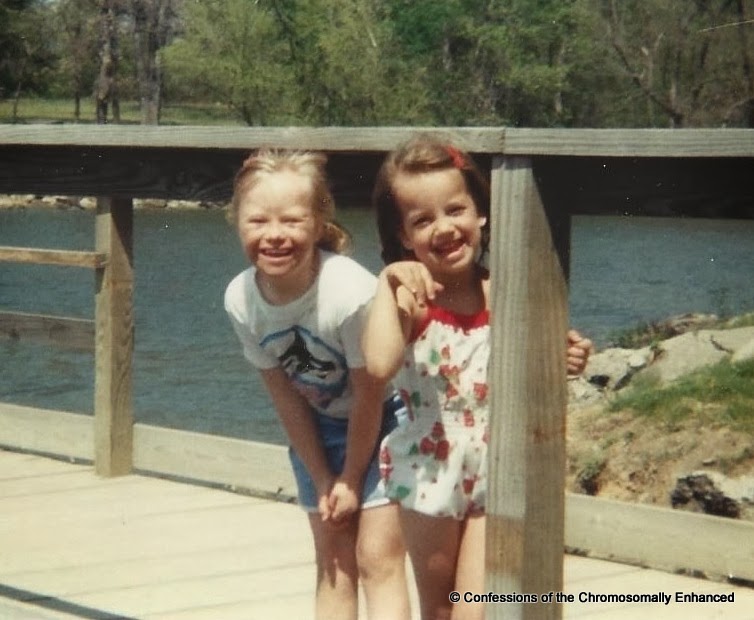 To this day, Leanne will be the first person to tell you that I'm "bossy".  Growing up I would demand she play with me, select the game, and dictate the rules.  The other night Travis was telling me how Merryn was sharing her coloring book with Josie but Merryn told Josie what letters she was allowed to color and she held her hand over Josie's hand while manipulating the pen - never once did she hand the pen over to Josie to use on her own accord. 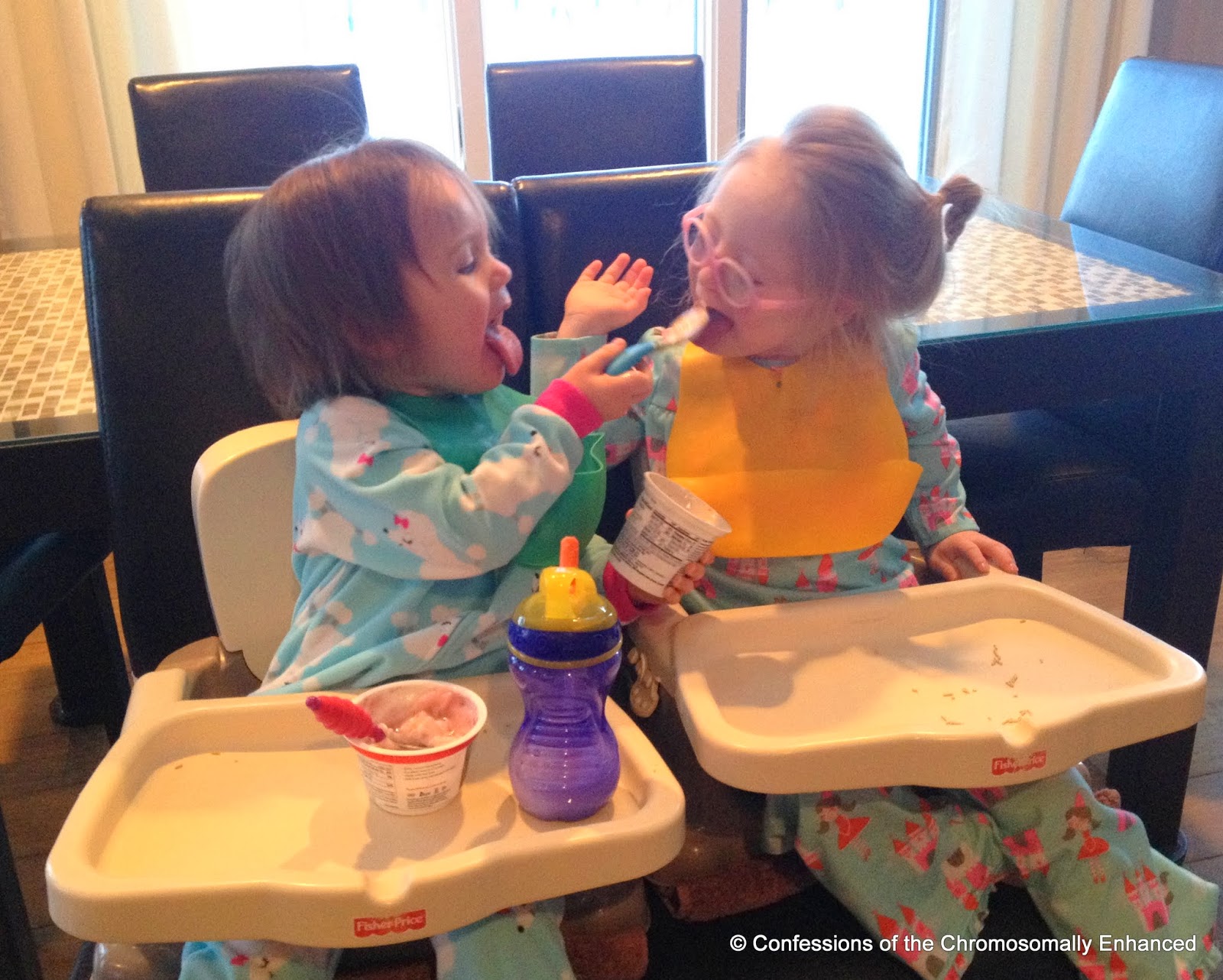 But just as Merryn likes to control a situation, she is also quite nurturing.  She attempts to feed Josie at every meal even though we're desperately trying to stress the importance of Josie feeding herself independently (Josie is delighted to be fed).

Merryn imposes her help upon Josie all throughout the day.  The other night I snapped this picture of Merryn insisting that she be the one to "read" a bedtime story to Josie instead of mom.  I've had the distinct feeling that Merryn is trying to replace me as the "mother" on more than one occasion.  I call her our "Little Mother Hen". 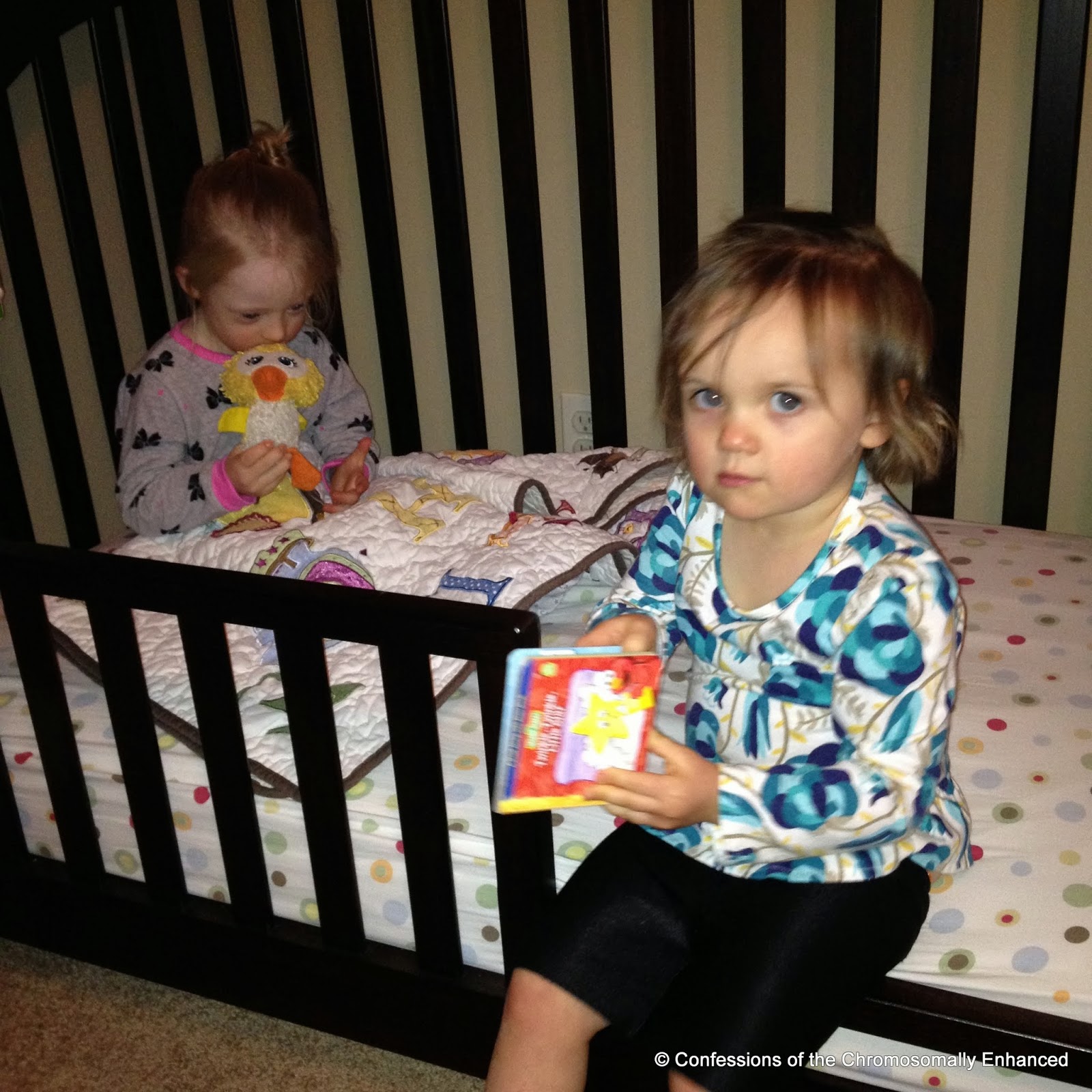 And that's one way in which Merryn and I are a little bit different.  Because I did not developmentally surpass Leanne until later on, I didn't have the opportunity to be quite as nurturing towards her.  Leanne was six when I was Merryn's age so she was much more self-sufficient than Josie is now.

But despite being functional first borns, I think Merryn and I still maintain that younger sibling perspective that our older sister is the coolest person to walk the planet! 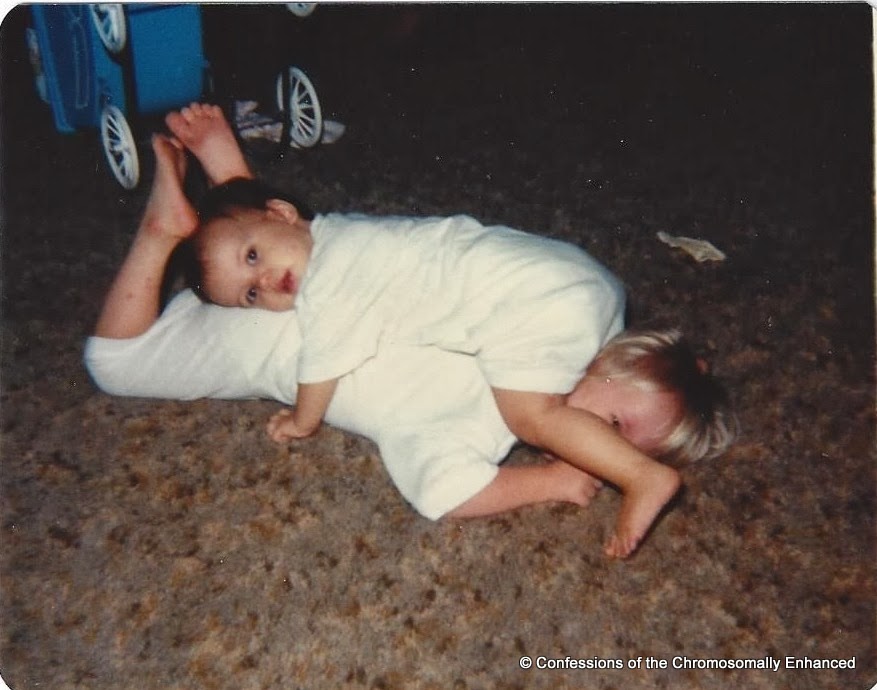 Growing up, I thought Leanne was awesome.  She was my big sister and there was a certain degree of idolization that came with the territory.  There still is - I still think she's the cutest, funniest, most charismatic individual to ever grace the earth and I dare you to try to tell me otherwise!

Likewise, Merryn idolizes Josie.  It was evident early on and it still is - remember this post (Click Here, Mom)?  Josie wears Hip Helpers - special support shorts that are supposed to correct excessive hip abduction associated with low muscle tone.  Well, the other day Merryn wanted to wear a pair of Hip Helpers, too.  Because if Josie has them, then they epitomize cool! 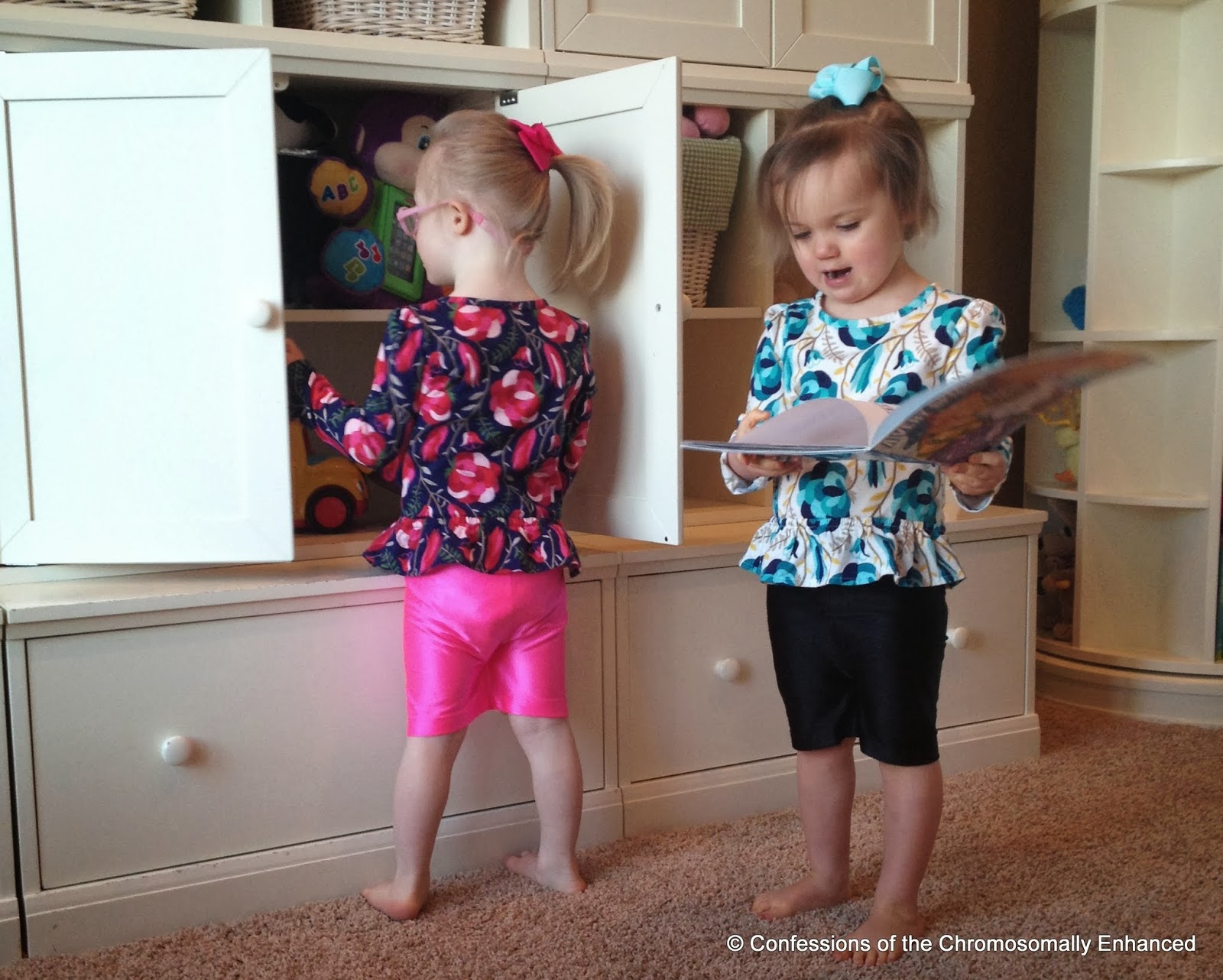 And you see Merryn's hair?  That's a "ponytail" (or as close as we could come).  She insisted on having a ponytail because Josie had a ponytail.  The request was a little easier to fulfill than last week when Merryn insisted on having a "braid like JoJo's".  Similarly, Merryn loves to try on Josie's orthodics.  And even though Merryn has her own tricycle, she'd much rather ride Josie's adaptive tricycle. 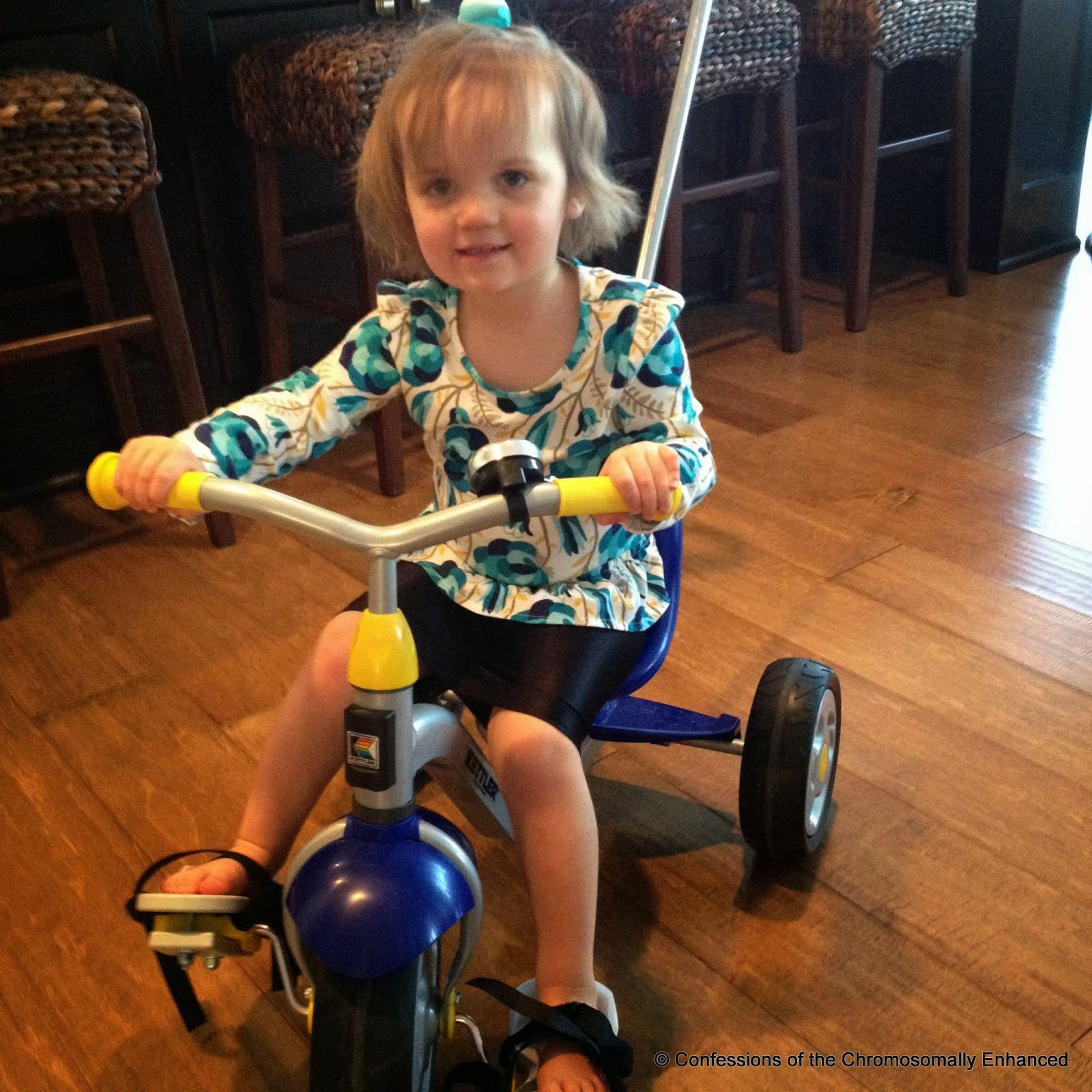 But while I highlight the way we embody birth order stereotypes, I'll be the first to point out that they are solely that - stereotypes.  We all know people who are the exception to the "birth order rules" (Britney Spears, JFK, and Donald Trump - to name a few).  But it is an interesting idea to examine when we think about the components that make up our personalities and how influential a sibling can be in that process.