A couple of weeks ago Travis called me from work and I began venting about all of the things I have to do: find a new nanny, pediatrician, dentist, family physician, Ob/Gyn, pediatric cardiologist, pediatric pulmonologist, pediatric GI doctor, orthotist, vision therapist, physical therapist, occupational therapist, speech  and language pathologist...He pointed out that those last three services would be provided in our local district's preschool program.  I sighed and said that enrolling Josie in preschool was just another item on my "to do" list.  Travis "The Resolution" then pointed out that the school district would likely require a lot of formal paperwork and documentation and that he would happily go to the website and see what we needed to compile because it would certainly be lengthy and time consuming.  That was his way of taking something off of my plate so I dismissively agreed and hung up the phone. 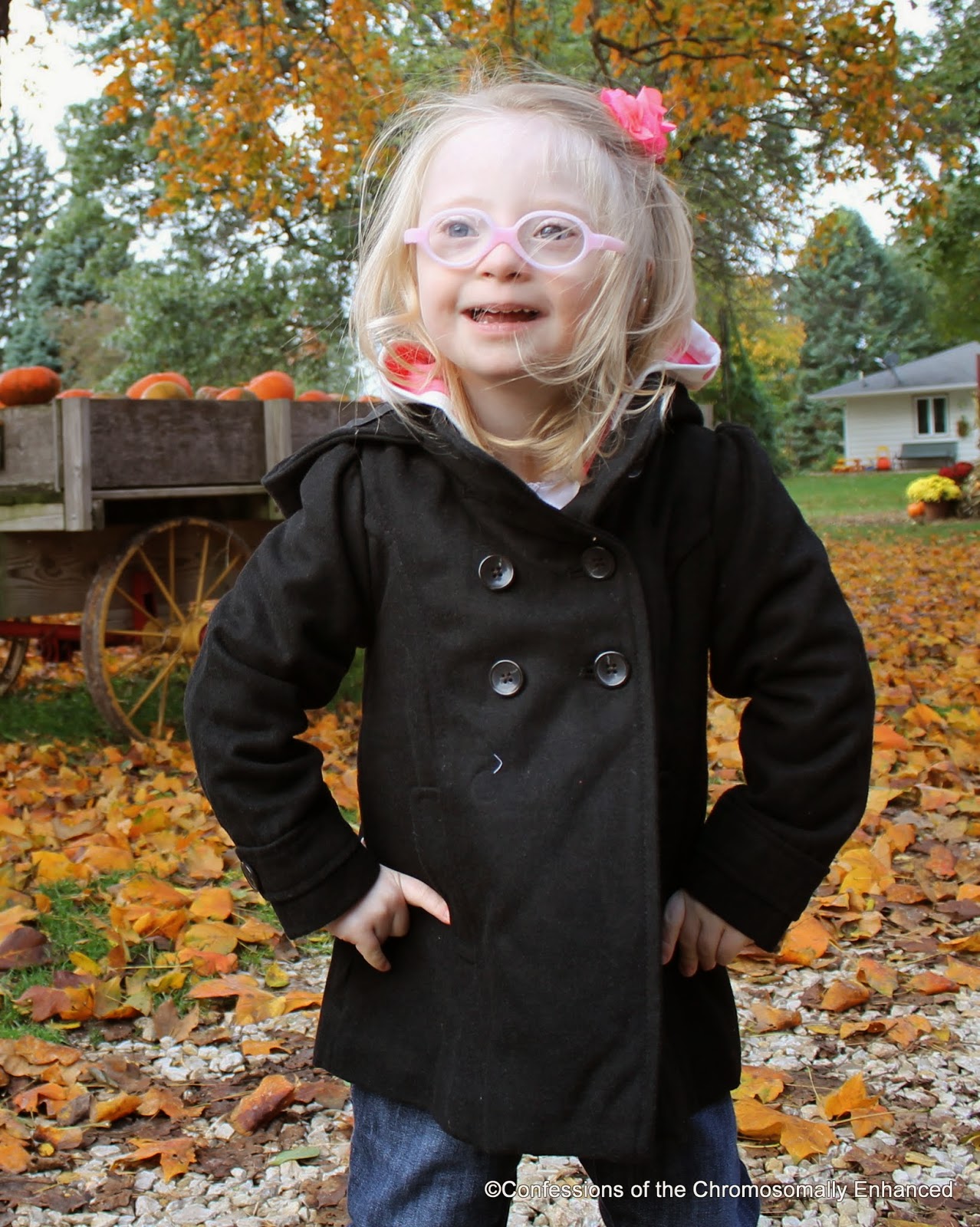 An hour later he called me back and proudly announced "I enrolled Josie in preschool!"
"You what?!?!" I screeched into the phone, completely shocked. "I thought you were just going to go to the website and see what paperwork they needed!"
"Well, I was..." he admitted "but then I started filling out this online form and I ran into a problem so I called the phone number and the next thing you know, she was officially enrolled.  Susan will be calling you to set up a meeting."
In that moment, the past four years flashed before my eyes.  Adopting Josie changed my life.  Her health struggles have dictated my schedule ever since.  (Check out the 2010 archives of our blog or Click HERE to learn more).  I have invested my whole heart into helping her triumph in spite of the health and developmental obstacles she faces.  And now, thanks to my "helpful" husband, I was going to have to release her out into the world - ready or not.
I was NOT ready.
My voice quivered as tears streamed down my cheeks. Travis immediately retreated and stammered about how I could always hold off on this... 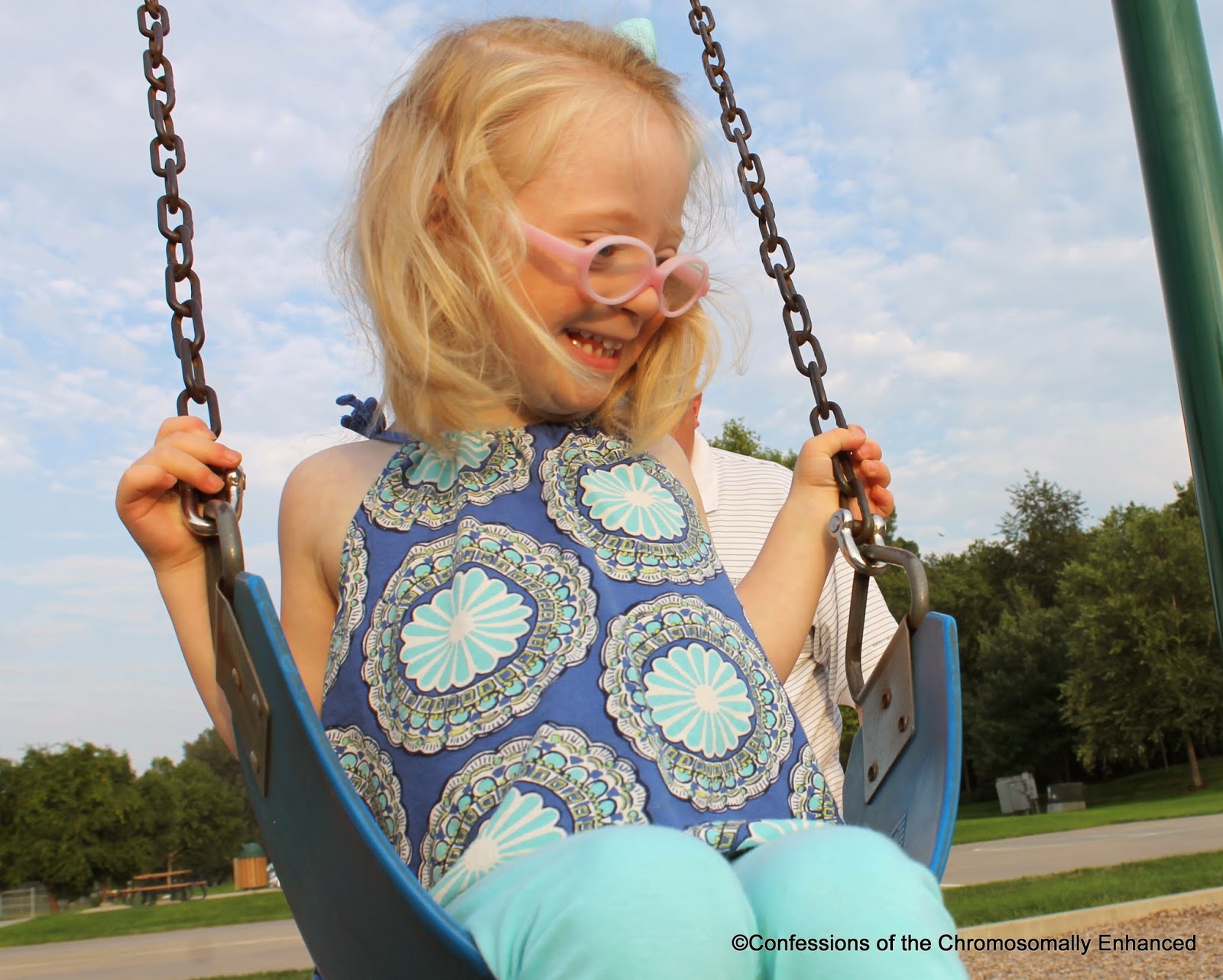 When he got home from work that night, I was still crying.  But as hard as it was to face the thought of letting her go, deep down I knew it was the best thing for her.  Within a week, we had Josie's IEP meeting.  We decided she would start the following Monday.
We prepared Josie as much as we could.  We've been talking about preschool, reading books about preschool, and making a BIG deal out of her sister's recent preschool enrollment.  However, Josie wasn't buying into the hype...
﻿
The child certainly mastered the fine art of sarcasm.
The day before preschool began for Josie, we took her to the school and let her play on the playground.  I felt like it would make her more comfortable if she were somewhat familiar with her new surroundings. 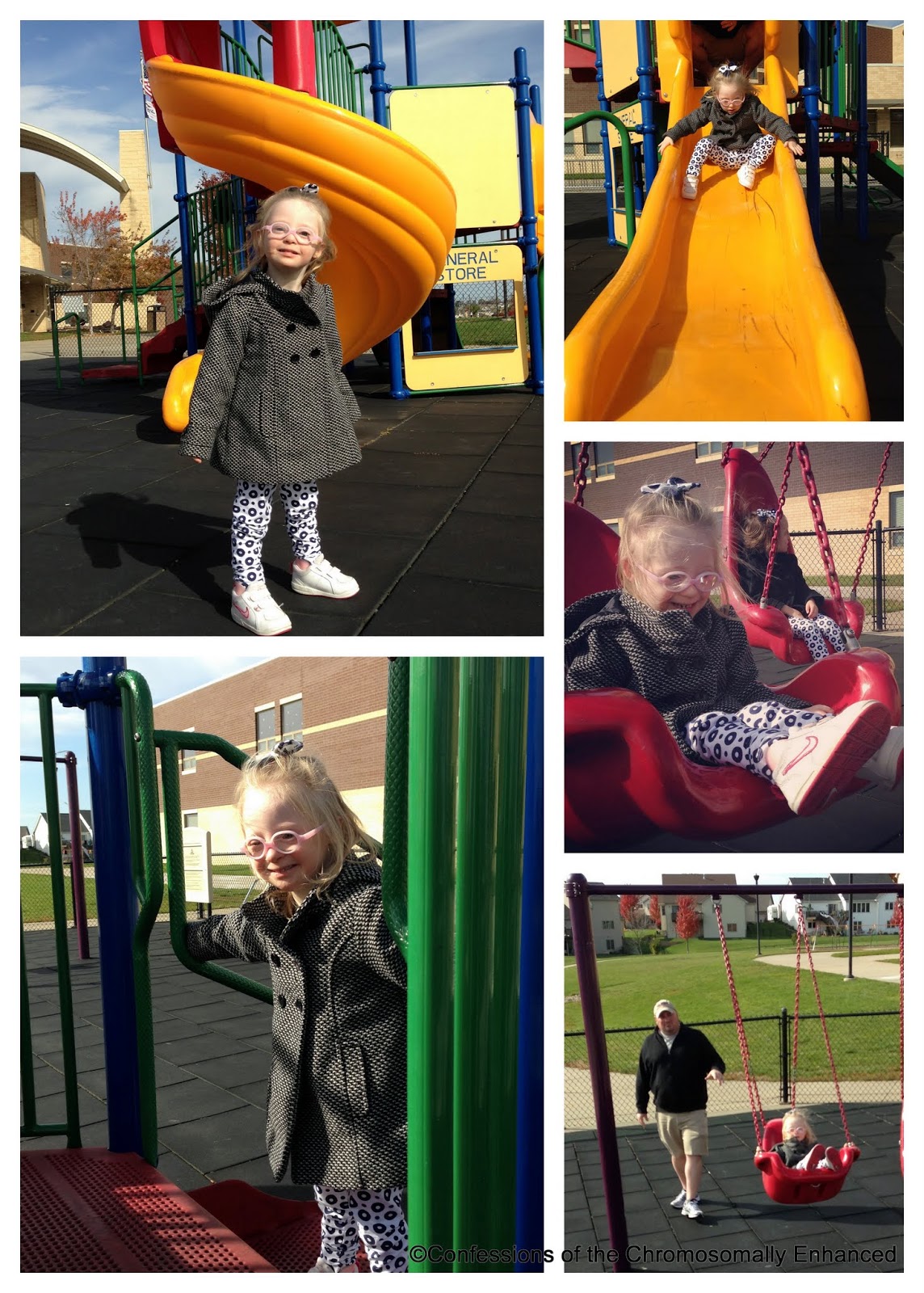 I ordered Josie a little backpack with her name embroidered on it... 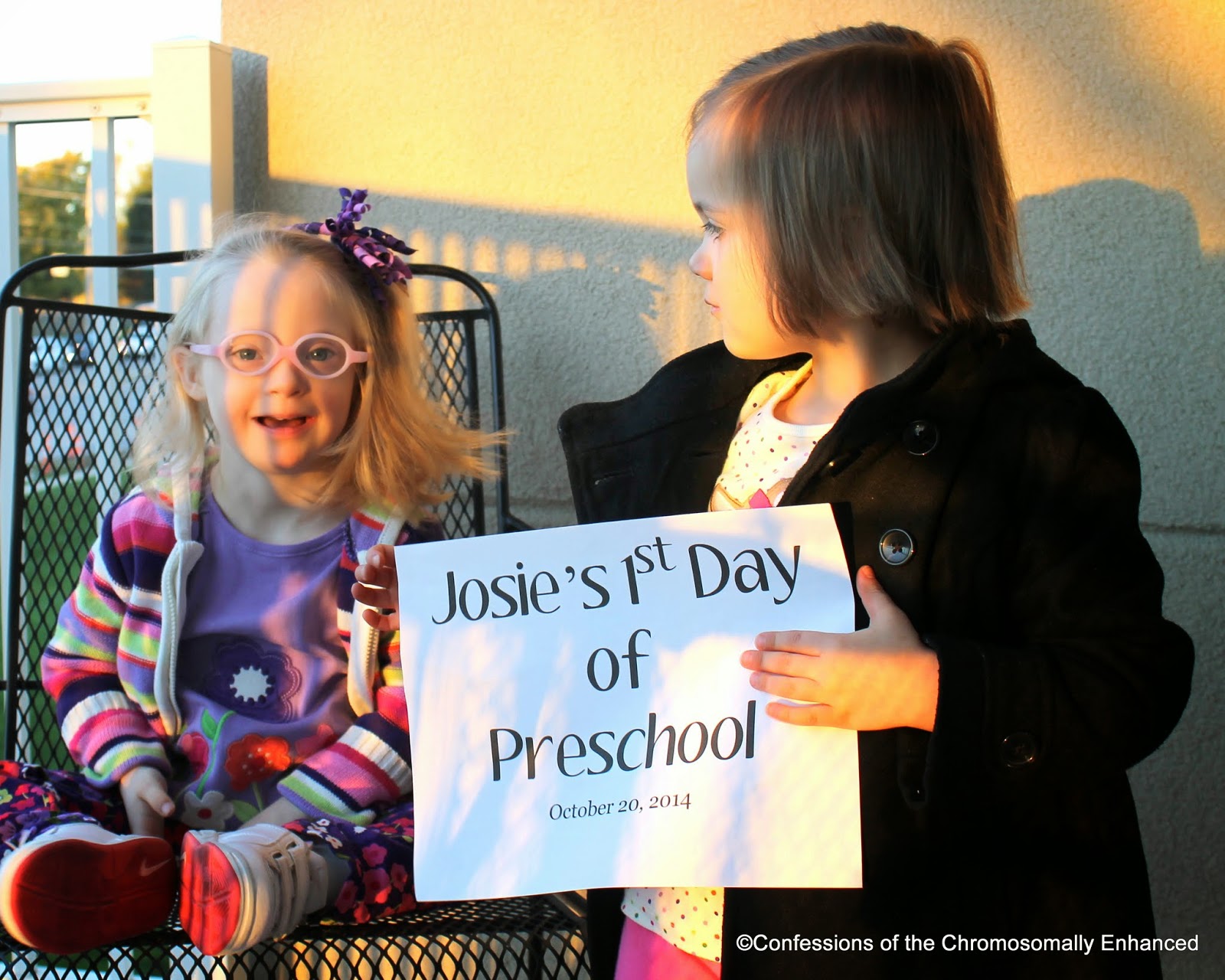 Mother Hen also stepped in to draw from her experience as an experienced preschooler and to offer her wisdom about the importance of a proper introduction:

She was all set.  We dropped Merryn off at her preschool and then we headed across town towards Josie's preschool.  We arrived early so I took the opportunity to try to reign in Little Miss Stubborn and emphasize the importance of a positive attitude and general compliance.

As soon as we got out of the car and headed towards the school, the toddler 'tude emerged with a vengeance.  I present to you, the heartwarming-and-sentimental-mother-daughter-first-day-of-preschool shot: 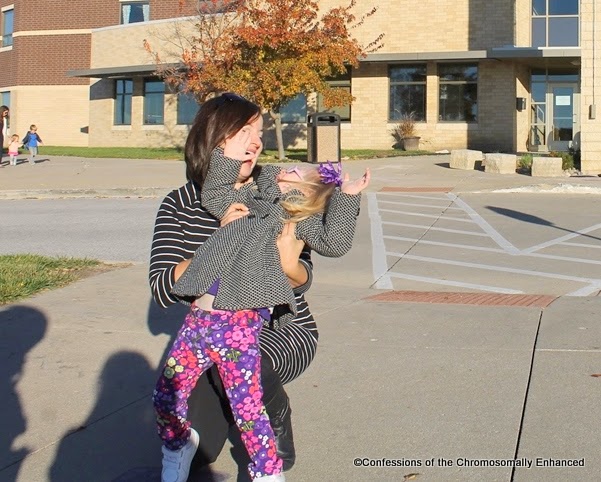 Lucky for us, there were skilled professionals waiting to step in.  One of the things that convinced me to move to this district is the excellent program for individuals with special needs.  The district preschool is fully inclusive - featuring both children with special needs and their typically developing peers.  The children with special needs are entitled to a one-on-one aide to offer additional help as needed.  Thank goodness for Ms Stacy.  As a mother of four, she assured me that she wasn't the least bit intimidated by Josie's obstinacy.  She took Josie by the hand and confidently led her into the building where she referred to a picture schedule to begin showing her the ropes. 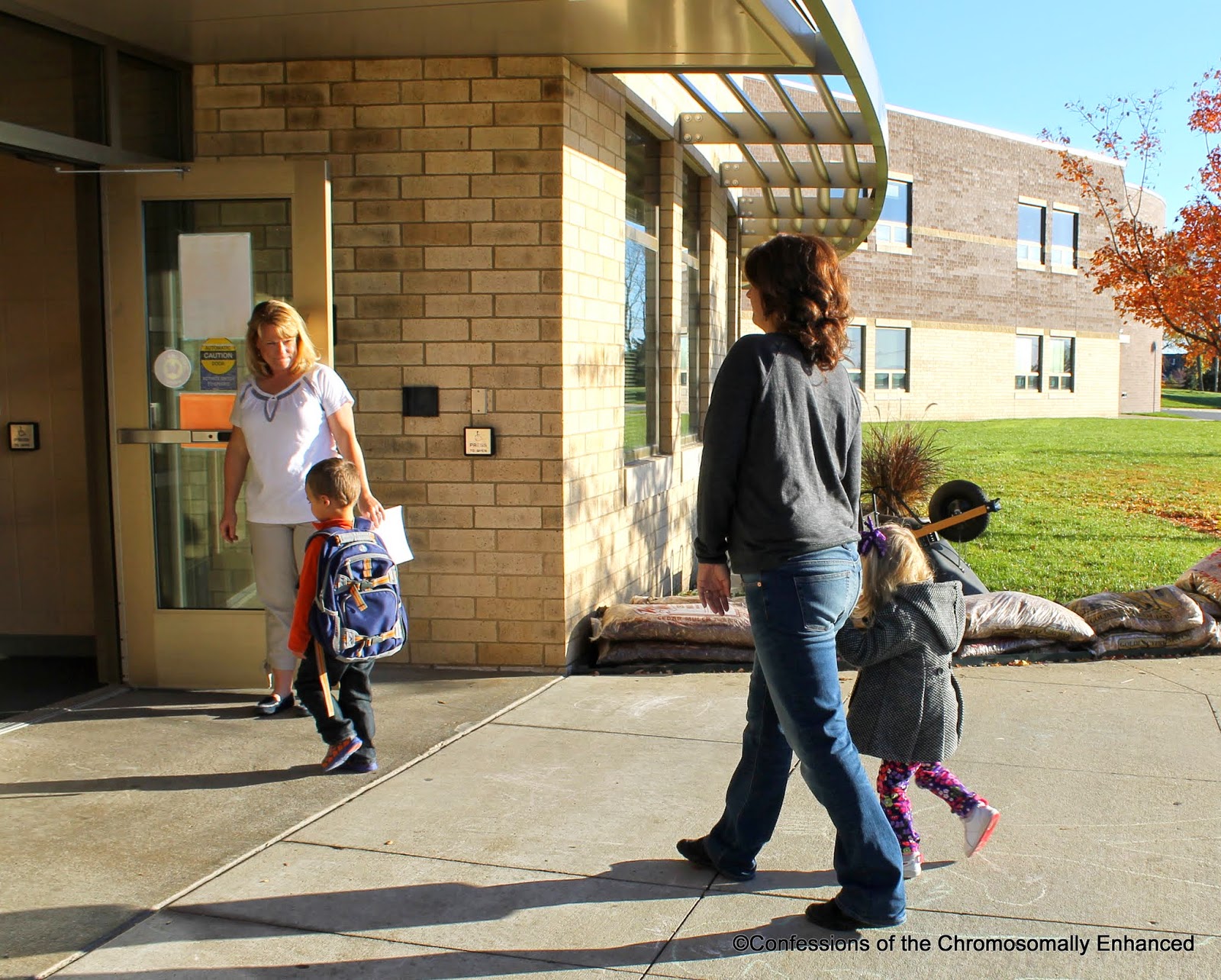 I took a few final pictures and then headed back to the car.  With tears streaming down my cheeks, I convinced myself that Josie would be fine.  She was in wonderful hands.  Besides, her teacher promised to call me halfway through the morning to update me on Josie's progress. 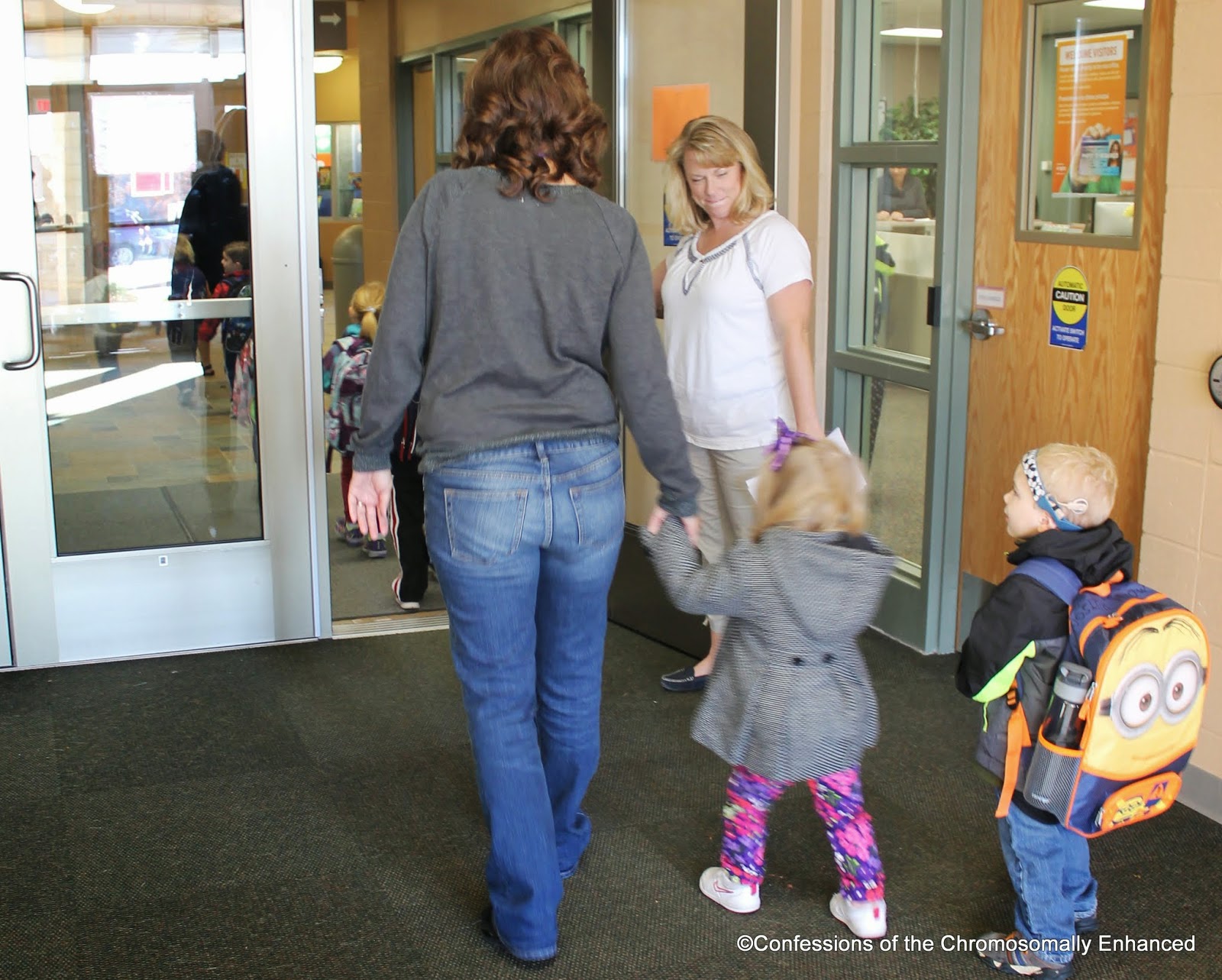 That phone call came but it was hardly a newsflash:  Josie enjoyed the song portion of the morning (you're kidding), she refused to eat her snack (you don't say) and they'd been hearing a lot of "no please no" (Gasp!  What in the world?!).

Well, at least I knew they had the right kid! 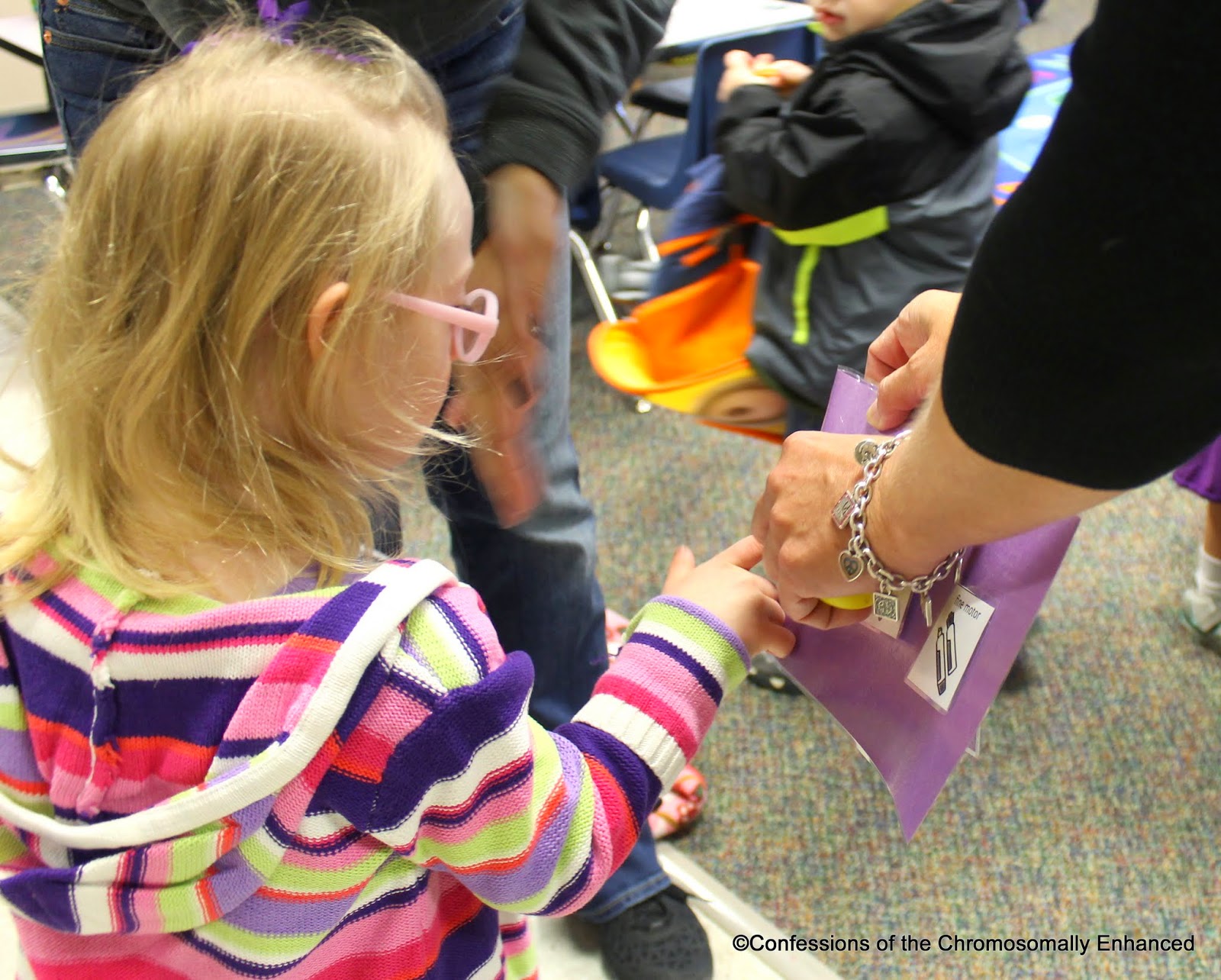 When I picked Josie up, her teacher debriefed me even further:  Josie does great one-on-one but she needs to be prompted to participate in a group activity.  They will work on that.  Josie becomes especially non-compliant during transitions.  They will work on that, too.  We are very aware of these challenges and we realized that they undoubtedly stem from her lack of exposure to a formal preschool setting.  That's why the opportunities for socialization and learning to follow a routine are so important for Josie's overall development.

Josie inhaled her lunch and took a three hour nap.  Preschool fatigue is no joke!  While she slept, I raided her backpack and found a progress report that said "My day was GREAT".  Of course I made her pose for a picture with that first glowing report.  Here's hoping for another one tomorrow! 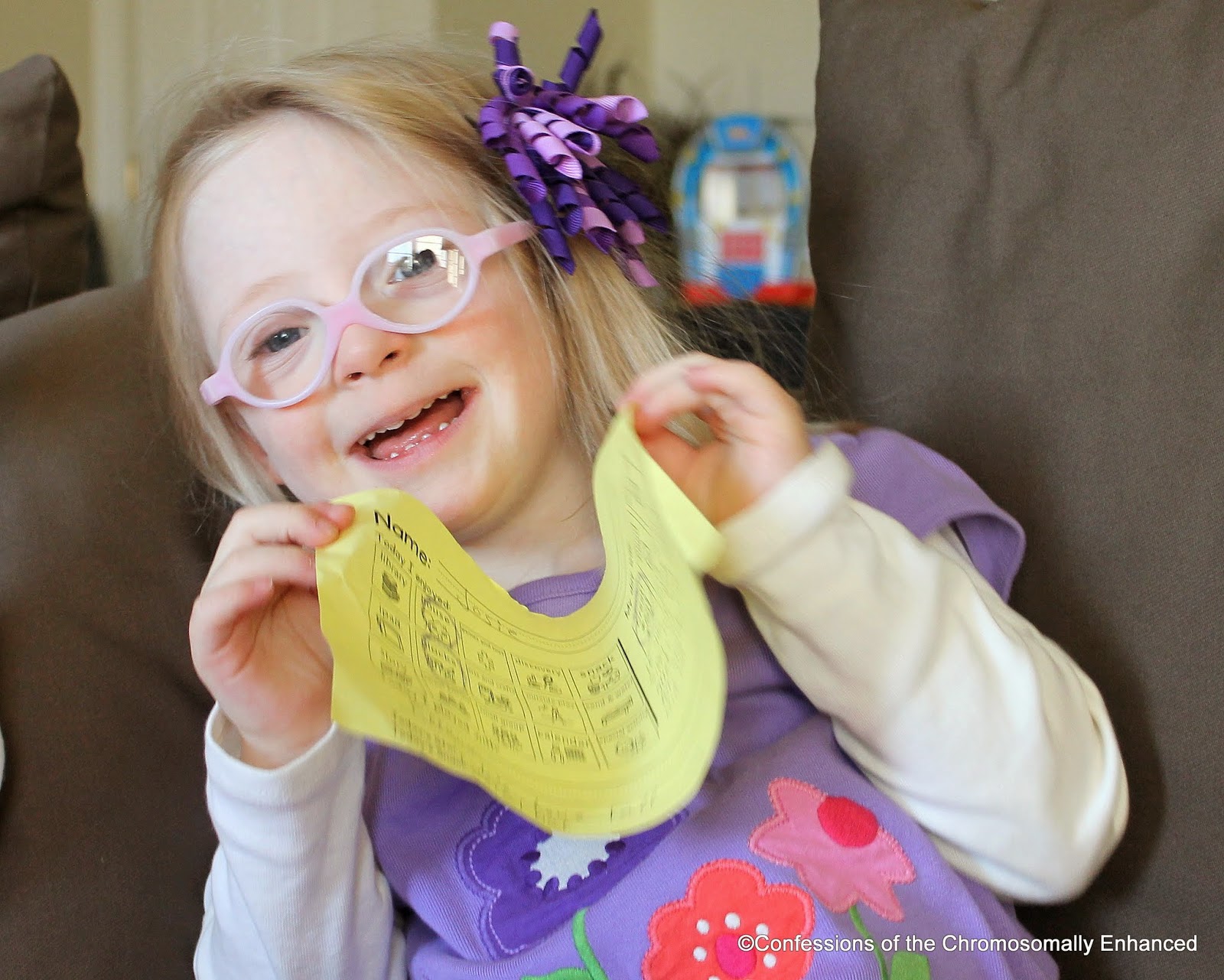