I realize that Down Syndrome Awareness Month is over as November has ushered in Adoption Awareness Month, but I recently received a question on Instagram and it was too good not to address.

It came from Elaine, a dear friend of ours who has known Travis and I since we were newlyweds living in Southwest Florida.  Elaine worked with Travis and she and her husband, Colen, were also our neighbors.  We spent so many fun times visiting with them in their family room.  Colen was one of the most magnetic, hilarious, and wise individuals that I've ever met.  He lived a rich life and he had an incredibly entertaining story to share no matter what the conversation topic was.  Sadly, we lost Colen to cancer in 2007 but his memory will remain with Travis and I forever.  This post is dedicated to him.  Something tells me that he's looking down on this circus that Travis and I are living with great amusement and he's cackling at the antics that consume our days.  I also know that he's taking good care of our late dog, Lillian.  He always did.

QUESTION: Elizabeth, being familiar with your life story and your early plans to adopt a DS child, a question has often come to my mind.  Is the reality of raising Josie as you had expected?  If different, in what way?  Even though you grew up with a DS sister, what have you learned from raising a DS child?  It all seems to come so natural to you and I love that you keep your sense of humor through it all. 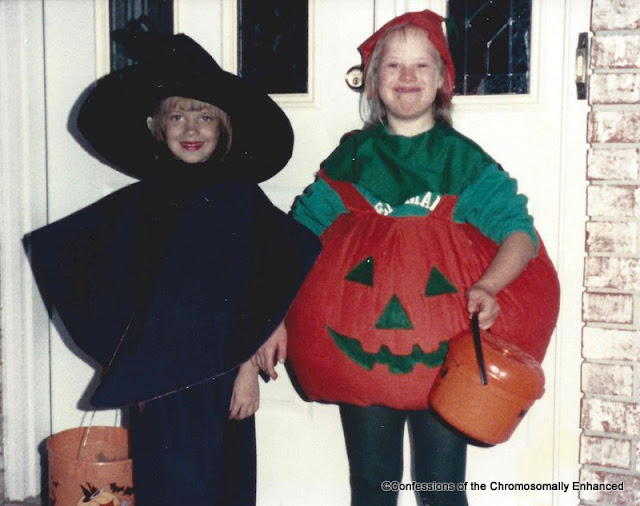 Attempting to address this question has exercised my brain to the point of fatigue!  My only sister, Leanne, has Down syndrome.  She is older than I am and I idolized her in the way that any little sister would.  Growing up in the special needs community, unbeknownst to me at the time, was my comfort zone.  I didn't realize how meaningful it was until I moved away from home for college. I missed my sister so much that I sought out opportunities to volunteer with individuals with special needs to attempt to fill the void in my life.  Being around individuals with various disabilities offered a refuge from the superficial rat race that often overwhelms us.  It was a celebratory environment without comparison or judgment.  I could be myself.  The emphasis wasn't on conformity but rather on celebrating the many attributes that make us all unique.

Fast forward to the decision to start a family and, as odd as it probably sounds to the typical person, it was natural to me to want to add a child with Down syndrome to our family.  That's all I wanted.  That's all I could envision.  And this came as no surprise to Travis.  He was completely on board.

We know the rest of the story.  When I reflect back now on how the reality of raising a child with Down syndrome differs from my expectations, I think there have been a few realizations:

1.  Health - Looking back, I was naive about the complexity of the health issues that we could potentially face.  Leanne was born with esophageal atresia but her health problems were mostly resolved by the time I was born.  Josie's VSD was diagnosed in utero so we knew this would require open heart surgery.  I spoke with cardiologists and researched the procedure beforehand.  It was a scary time but honestly, she healed quickly, and now, her heart gets great reports every time we see the cardiologist.  However, we did not know about Josie's respiratory issues.  We brought her home on oxygen but we thought that closing the hole(s) in her heart would fix the problem.  It turns out that Josie's lungs had problems of their own.  Because of what was later diagnosed as "chronic lung disease," Josie required oxygen, monitors, and multiple hospital stays.  The concern that aspirating the formula in her bottle was contributing to her poor lung function led to the placement of a G-tube.  Suddenly we had a very medically-complicated child.

Not all children with Down syndrome have extensive health issues.  Some are born very healthy and others encounter more challenges than Josie has seen.  While I wasn't prepared to become an honorary medical professional overnight, I rose to the challenge because Josie is my daughter and I love her.  People can give birth to typically developing, healthy children that later encounter accidents or illness that require in-depth accommodations and care.  The foundation of parenthood is unconditional love; this means being willing to love and provide care for your child regardless of what the future holds.  I wasn't expecting it and I wasn't prepared for it, but I figured it out because that's what a mother does for her children. 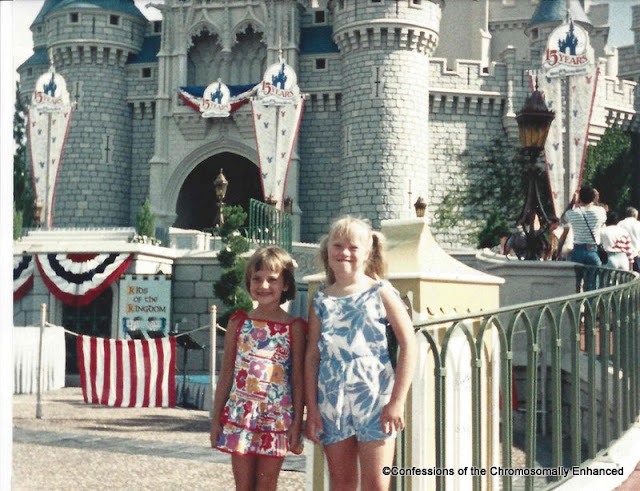 2.  Perceptions - Growing up I idolized Leanne.  I loved being a part of the special needs community.  Josie is my dream come true (if you ask her, she'll tell you that because she's heard it a million times).  But it wasn't until I entered the special needs community as a parent, that I realized that not everyone shared my positive perception of Down syndrome.  When I started the blog and began stumbling upon other Down syndrome blogs, it was an eye-opening experience for me to realize that the journey to acceptance can be long and difficult for many parents.  What is my dream come true, is a devastating diagnosis for others.  And it's no wonder that people who haven't had the experience that I have had are left thinking that Down syndrome is a burdensome sentence for a family.  If the only information you've received is from a clinical perspective - well, my heart goes out to you.  Because there is so much more to Down syndrome than a medical pamphlet or quick Google search can offer.  So new parents: tear up the pamphlet and believe me when I tell you that you just hit the jackpot.  Welcome to #TheLuckyFew. 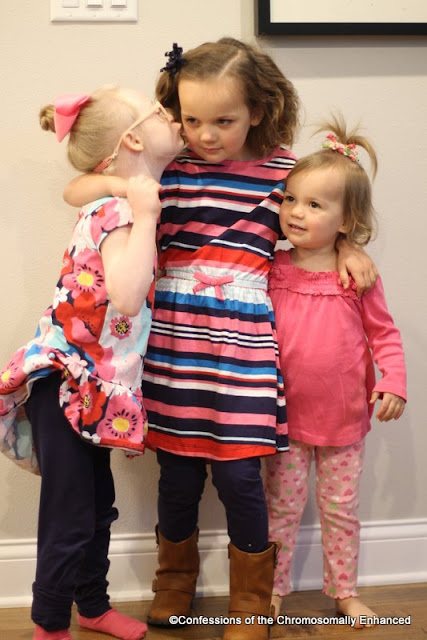 3.  Generational Changes - When I first started the blog in 2010, the subtitle was "Dual Downs Divas."  We always lovingly called Leanne the "Downs diva" so the alliteration seemed perfect.  It wasn't long before I was introduced to this idea of "People-First Language" (to read more, CLICK HERE).  It turns out that a term of endearment that our family found benign is actually very offensive to some.  What may seem like semantics "A diva with Down syndrome" vs. "Downs diva," is an important distinction these days because Leanne is not defined by her Down syndrome.  She is a person, first.  I apologize.  I grew up in a different generation.  I have nothing but love for the Down syndrome community and my failure to use people-first language was never intended to offend.  To this day, many people still say "Downs;" it's not uncommon to hear physicians say "Downs kids often have smaller sinus passages..." or something to that effect.  And it really doesn't bother me because I know that their intentions are pure.  But I will happily modify my language to avoid upsetting others. 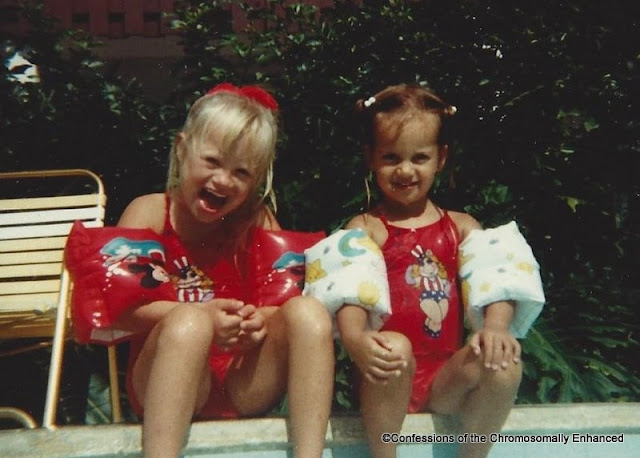 Just like the terminology, resources have also changed in the nearly 40 years since Leanne was born.  Our chromosomally enhanced kiddos are offered so much more in the way of interventions, therapies, medical care, and education.  The education perspective is HUGE for me and here's why: Leanne was educated in a special ed classroom in a separate wing of the building from her same-age peers.  The typically-developing kids were not allowed the opportunity to get to know Leanne.  A lack of exposure contributes to ignorance which gives birth to bias and prejudice.  This can be said for any minority group.  It's been illustrated time and again throughout history.  Today, Josie is in a "regular" kindergarten class with her typically developing peers.  And guess what - they LOVE her!  They excitedly greet her every day, they learn alongside one another, and they play together on the playground.  I'm sure they get to witness Josie's deficits and quirks as well, but because they've truly gotten to know Josie, they realize that there's so much more to her than her disability.  They look past her differences.  And in 20+ years when they're raising children of their own, I believe they'll raise an even more compassionate and accepting generation because they will say "I grew up with a little girl with Down syndrome and she was pretty cool."  Ignorance and bias are being replaced by a genuine appreciation for the value that individuals with Down syndrome bring to the world.

So, what have I learned in raising a child with Down syndrome? 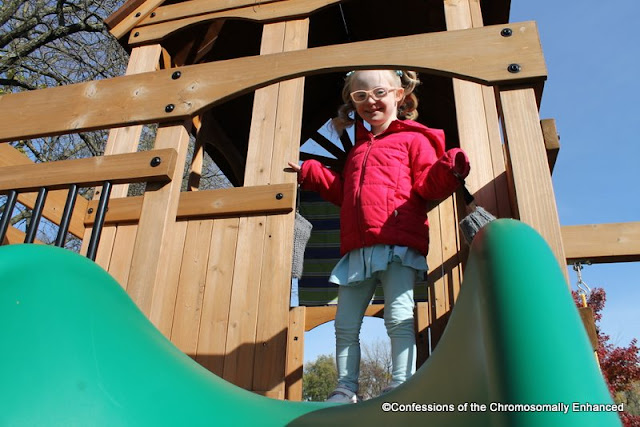 I believe Leanne already taught and prepared me for the the important stuff about parenting Josie - the richness that she would bring to our lives.  She has a value beyond what superficial parameters of perfection can measure.  What I've learned in parenting is that this message needs to be SHARED.  I can't keep this goodness to myself.  In fact, I wish I could introduce my sister and daughter to everyone in the world.  I wish everyone could be embrace to the wonder of it all.  Truly.  I wish I could share this gift with everyone.  The world would be a enhanced immeasurably if the darkness of negativity and bias were illuminated by the true and pure beauty that their lives possess. 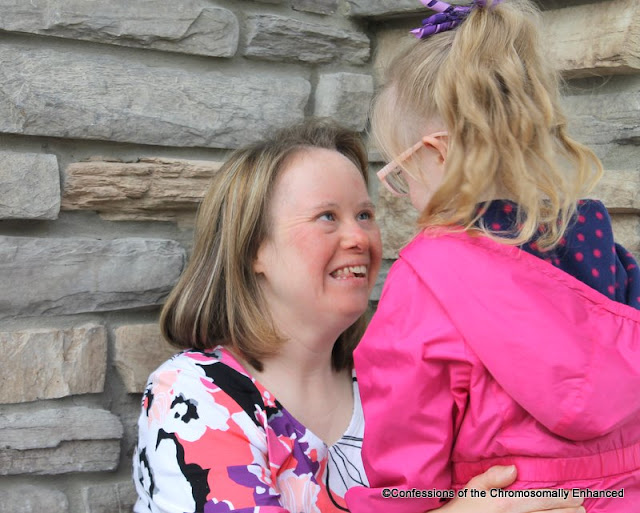