Down Syndrome: Finding Hope in Hurt

I was offended last weekend.  I walked into a coffee shop and struck up a conversation with an older gentleman who was putting stickers on the paper bags that you scoop coffee beans into.  Full disclosure: When I'm out in the community, I'm always looking for prospective jobs that Leanne, Josie, or another individual with special needs could do and that's what drew me to him.  We started chatting at his daughter walked up and introduced herself.  Somehow, in conversation, I told them that I was on my way to a special needs conference and the older man interjects "That's what I need!"  It was intended to be a self-depreciating joke but it obviously missed the mark on the audience.  The daughter awkwardly jabbed him in disapproval and I'm sure the look on my face was a very clear mixture of shock and disappointment, without so much of a glimmer of amusement at his attempt at humor.

I walked away bitterly thinking 'Well, Leanne will NOT be working there!'

That one offensive little comment haunted me all day.  It kept playing in my head, over and over, to the point where I was mad at myself because I just couldn't let it go.  And here's the frustrating part: Leanne and Josie receive countless positive comments.  Everyday, they inspire, encourage, and amuse people.  They truly bless peoples' lives with their presence.  So when the reception to my sister and daughter is so overwhelmingly favorable, why is the one thoughtless, ignorant comment that stings the one I can't get out of my head? 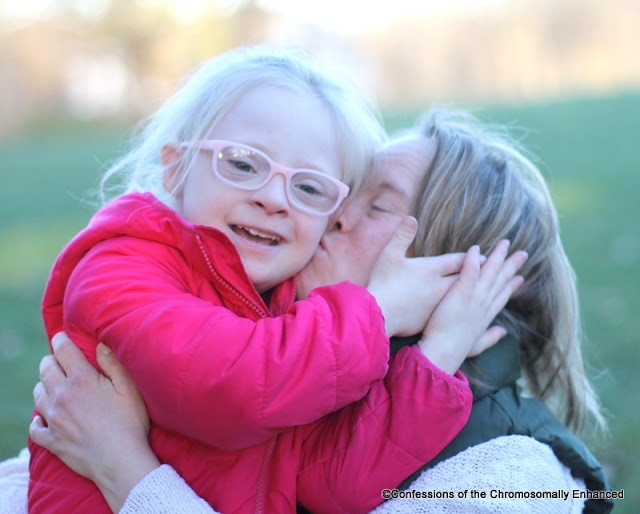 Because I felt like this was having a negative impact on my psyche, I challenged myself to think of it differently.  I told Travis about the comment over dinner and he laughed out of shock at the gall of the old man and he found humor in the irony that the joke could not have been targeted to a more hostile audience.  I told Travis, "But otherwise, he seemed like a nice old man.  In fact, he probably would have liked Leanne if she worked there.  I bet he would have been very kind and patient with her.  He just hasn't had experience with people with special needs.  He doesn't know better because he never had a chance to learn - that's not his fault."

It was still a conscientious effort to stifle the sting and force myself to try and view the situation with the benefit of the doubt and I was incredibly proud of myself for trying, because I knew holding on to the hurt wasn't doing me any favors.

I believe so much has changed generationally to support inclusive attitudes towards individuals with special needs that this type of unintended ignorance is fading (this is me giving the gentleman the benefit of the doubt that his comment was not intended to be malicious or hurtful).  I believe that the kindergarteners in Josie's class will not grow up to make jokes like this.  I believe they will not grow up to say the "R" word.  They know Josie.  They know better.  In the era that this gentleman was educated, he certainly didn't have any children with special needs in his class - probably not even in the same school.

Hubert Humphrey's (Vice President of the U.S. under Lyndon B. Johnson) granddaughter had Down syndrome.  I found an article written by Hubery Humphrey's wife, Muriel, in the Chicago Tribute written in 1971 about their granddaughter, Vicky.  Let me warn you: the outdated terminology is jarring.  But realize that it was 1971.  If you can wade through the terms that are now considered offensive and extract the heart of the article, you'll find that the Humphreys' desires for their granddaughter are very similar to what parents of children with special needs still want for our kids: to be accepted and appreciated exactly as they are.