Reconciliation, Arson, and a Visit from Mama Hop

I'll never forget receiving the Sacrament of Reconciliation for the first time.  I buckled under the pressure of having to remember the protocol, memorize the prayer, of being issued a penance, and the sheer terror of that dark, scary booth.  No worries - Mama Hop wasn't going to let me flee from this necessary step of becoming a card-carrying member of the Catholic Community.  Mama Hop was raised by the nuns in a strict, Pre-Vatican II era so she channeled that austere background and she opened the door of that spooky booth and shoved me in! 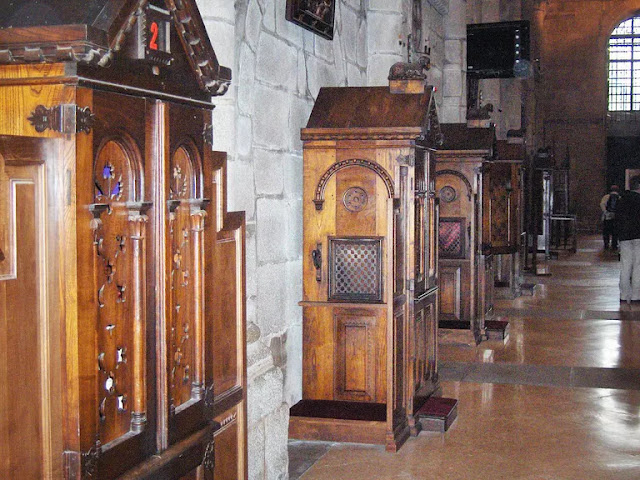 Y'all know what I'm talking about; you've seen the movies!  It's scary!

Well, Josie and Merryn have been preparing for this sacrament in faith formation for months and today was the big day.  Let me tell you, the church (at least our church) has loosened up significantly when it comes to the rigidity of reconciliation.  The "Act of Contrition" is worded much simpler than the one I was required to memorize, and speaking of memorize - that part isn't required anymore either.  In fact, they handed us programs with the prayer printed in it and we all said it together before the kids formed lines and prepared to talk to the priest. 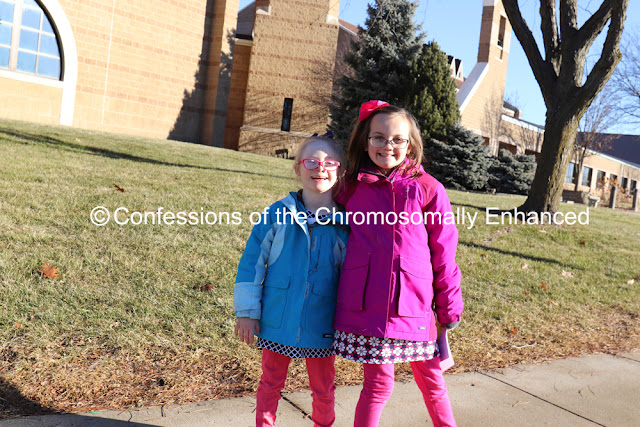 Speaking of priests, I've always been a little frightened of them as they seem so intimidating.  That probably dates back to my high school physics teacher - a stern old priest who wore a microphone.  When he would get angry, he would make us stand up, and hold our giant text books out in front of us, and keep our arms straight while he sternly lectured us about whatever we had done to irritate him.  If he saw bent elbows, he'd yell, "Straighten those arms - don't bend your elbows!"; a yell which was amplified by that microphone he wore.  Ultimately, he was a sweet, well-meaning man.  He just had a Pre-Vatican II disciplinary style.

But our parish priest is nothing like that; he is the sweetest, most approachable, down-to-earth guy.  He has a soft spot in his heart for children with special needs and he approached me before we started and showed me where his line would be so Josie could come see him.  He always greets Josie and signs to her, even though he knows far more sign language than Josie does. 😉 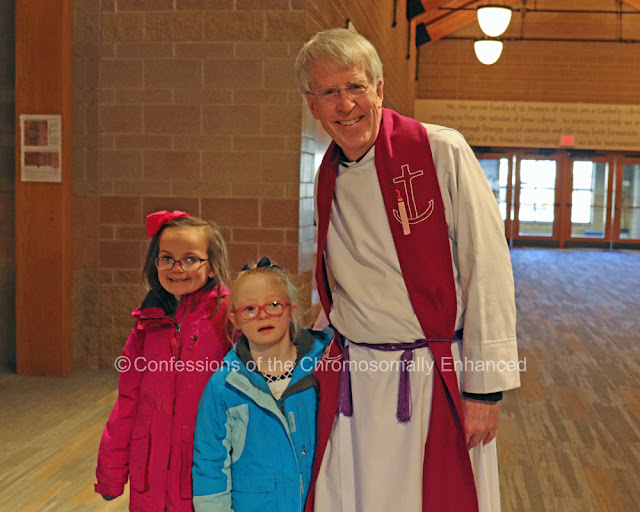 We sat near the front and Merryn reviewed Josie's visual aid with her; an awesome creation by our special needs ministry director.  The special needs curriculum uses the terms "good choices" and "bad choices" to help the children identify behaviors for which they should seek forgiveness.  Josie really caught on to that and she seemed really secure and prepared for the sacrament. 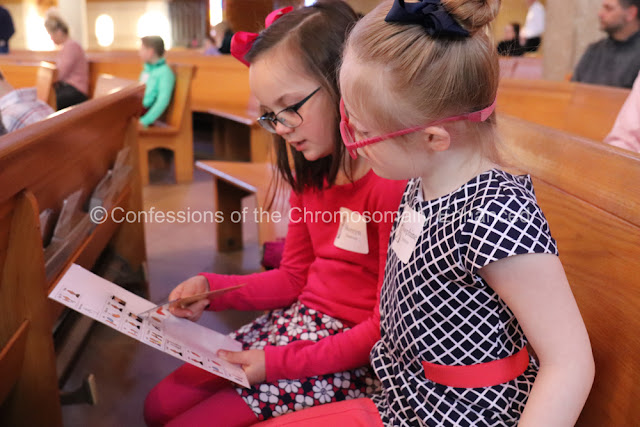 Did I mention that there are no dark, scary confessional booths in our parish?  Just several priests stationed in chairs around the pews, so the kids had some privacy but were still within view of their parents.  But Josie opted not to sit in the chair across from the priest; instead she perched herself on his leg, and wrapped her arm around him like she was visiting Santa Claus.  She didn't exactly follow proper protocol, but Father was fine with it and Josie successfully completed her First Reconciliation.

Merryn did as well...and it seemed like we made it through this momentous occasion with a certain degree of success...until Merryn damn near burned down the church.  She was lighting her candle, got scared, and dropped the lit stick on the table cloth and ran off in tears, bellowing, "That's why you don't let kids play with fire!!!" 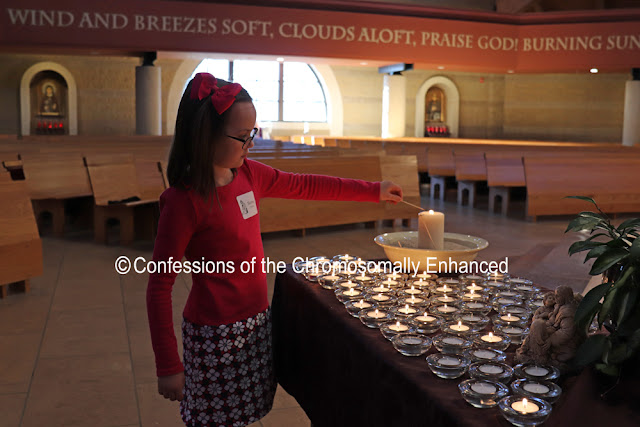 Motherhood requires us to be a jack of all trades so I immediately dropped the camera and went into firefighter mode, grabbing the burning stick and extinguishing it in the sand.  I ran to follow Merryn and console her through my uncontrollable laughter.  In that moment, I could FEEL Mama Hop there, too.  She was laughing so hard, her shoulders were shaking and she was ready to pee her pants.  Never has she felt so close to me since she passed.  I knew she was there, loving every minute of this fiasco.

And as far as sacraments go, we're no strangers to making a scene in the house of God.  You remember "The Baptism from Hell," right?  I'm really surprised they keep inviting us back.  I guess we'll keep coming back until we finally get it right.😏
Posted by EN at 3:03 PM