How Josie Made Daddy's Weekend at Mommy's Expense

I know it's a rite of passage of motherhood to gradually build an arsenal of stories featuring your children doing shocking, disgusting, or mortifying things.  In my experience, mothers of chromosomally enhanced children tend to have particularly colorful stories that would make you bust a gut.  The "Leanne Stories" are absolutely hilarious but far too numerous to get into here.  Many of them are at my mother's expense which was particularly gratifying for me - until now.  You know what they say about payback...my mom likes to remind me of this frequently with a Cheshire cat grin on her face!
Last weekend, Josie provided me with a story for my own arsenal:  one I likely wouldn't share, except she was kind enough to do it in front of her father which means I will never live it down.  You see, I was getting the little dear ready to take a bath.
Bathtub filled - check
Washcloth & towel ready - check
Naked baby - check
But what happened in the five seconds it takes me to carry that naked baby from the changing table to the tub is the memorable part.  You see, in the blink of an eye, Josie decided to *ahem* back the big brown motor home out of the garage, right at the entrance to the bathroom where I unknowingly, and barefootedly stepped in it, henceforth, making Travis' day(month/year, etc.).  He was so overjoyed by the moment that he decided to photograph it - but I will spare you that pictorial appendix.  Instead, I think this photo pretty much captures the essence of the incident... 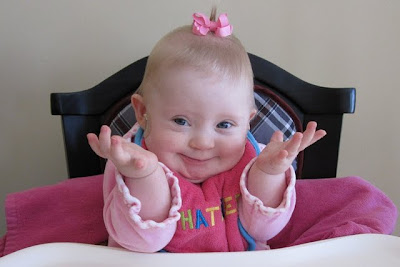 Hey, ...it happens!
Doesn't having kids pretty much guarantee you will end up with a pretty good poop story or two?  My brother-in-law has a particularly priceless one about my niece that took place on the slide at the McDonalds Playland.  So while I apologize if you accidentally read this while eating, I'm pretty sure anyone with kids can relate...it happens!
Posted by EN at 7:23 AM