While the Chili Cook Off was certainly the highlight of our weekend, we had lots of fun times with YaYa and Papa.  YaYa and I took Josie on a rare outing to see the pediatric ophthalmologist.  We dressed her up in an outfit to match her adorable new headband from my talented friend, Lauren, and we hit the road! 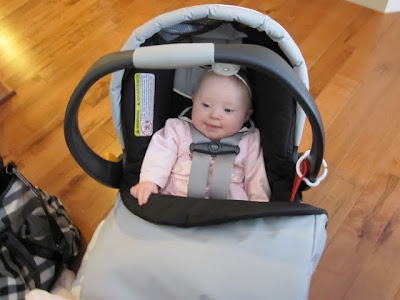 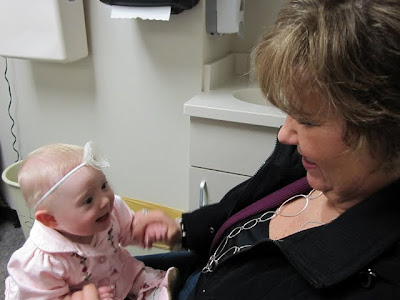 YaYa entertained Josie while we waited for the doctor.
Josie was such a good girl while they dilated her eyes and performed a series of tests on her to check her vision.  Once again, she takes after Aunt Leanne - she loves attention! 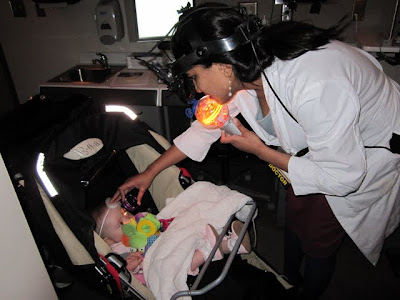 When all was said and done, we received great news - her eyes are perfectly healthy and her vision is normal!
We went home and celebrated with a delicious prime rib dinner.  Josie even got to sample some mashed potatoes and asparagus.  I think we're going to have a good eater on our hands! 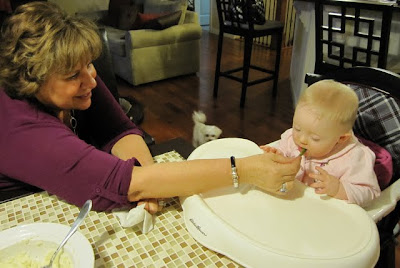 Because it was a special occasion, Josie got to stay up later than normal and have fun with YaYa and Papa.  There was lots of "Row, row, row your boat...", "Pat-a-cake" and frantic arm waving.  We're lucky her dinner stayed down! 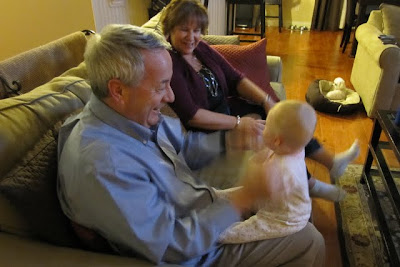 Josie joyously basking in her undivided attention
One of the funniest moments of the weekend was Travis showing his mom his "weekend run to the grocery store" outfit.  Notice how she's clutching her heart in shock. 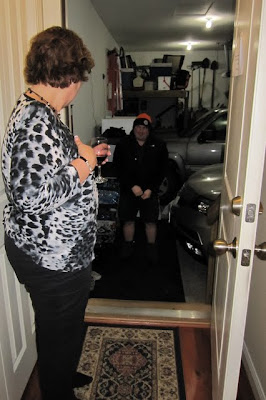 Nothing exemplifies rugged sexiness like snow boots, shorts (yes, shorts...in January...above the Mason Dixon line), camo gloves, an orange and blue Illinois hat (circa 1995), and the black jacket with the hooded sweatshirt sticking out.  I think he fancies himself Bo Brady. 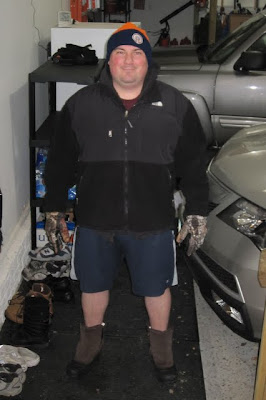 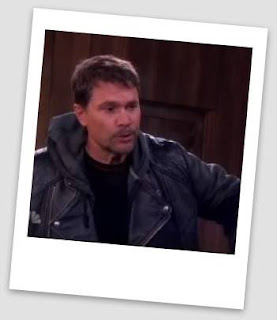 My husband - the soap opera heart throb!  What do you think?  Does he pull it off?
YaYa said to me "You let him go out in public like that?!"  and I said "Just as long as I'm not with him!"  Maybe some Internet-wide blog humiliation will change his ways...nah, I doubt it.  We've been married eight years - you pick your battles sometimes and roll your eyes the rest of the time.
Yesterday, it was time to say goodbye.  YaYa and Papa were actually on the last flight out before Snowmageddon hit the Midwest. 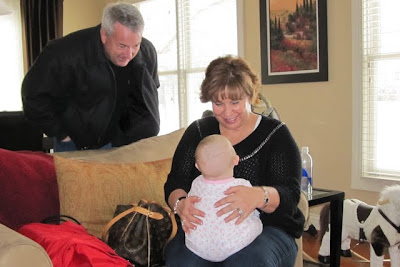 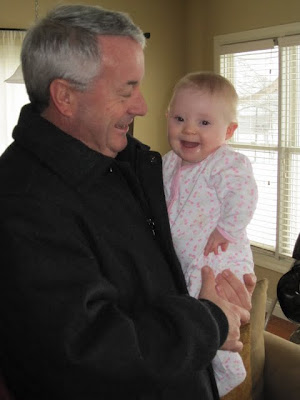