Mama Hop and Aunt Leanne came to visit and to celebrate Christmas a little early. 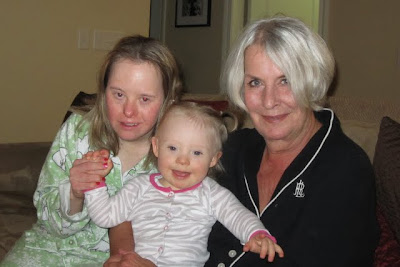 Typically, we would all gather around and exchange gifts but that's not exactly the way it worked out this year.  Lured by the appeal of those colorful gifts and crinkly paper, Josie decided to help herself while mom and I were cooking dinner... 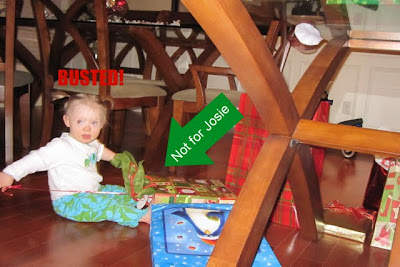 Instead of being admonished and handed a lump of coal, Josie was showered with gifts early.  I guess that's what grandmas are for. 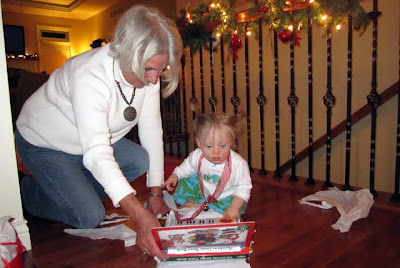 Being the retired school teacher that she is, Mama Hop decided to spread holiday cheer by encouraging literacy, and she made a pretty significant contribution to the girls' children's book library.  Josie is glad Mama Hop is doing her part to make sure Barnes & Noble doesn't suffer the same fate as Borders.  She loves books!  She especially loved this nifty book of Christmas carols with a built in keyboard.  She played with it for the longest time! 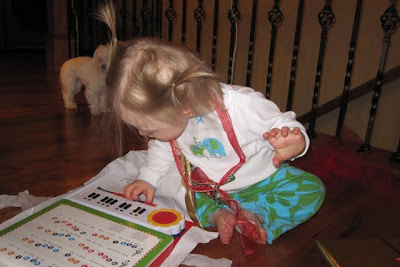 And even though Aunt Leanne insists she's an "adult," she can't resist a good children's Christmas book with built in piano!  When she thought we weren't paying attention, she decided to tickle the ivories. The best present was saved for the next day.  She's been hyping it up for months and after being carefully preserved and tucked away in a secure and remote location in anticipation of the most sacred of gift-giving occasions,  it was finally time for the big reveal.   Presenting...drum roll please...
"The chicken in my closet from the fairgrounds"! 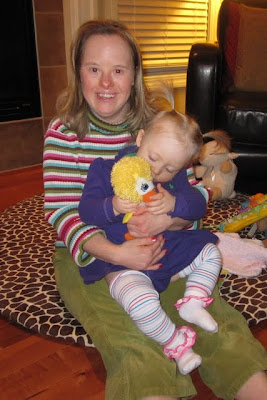 I know you're all wondering where you can get one of your own, but this is a one-of-a-kind, hard-earned item won by one dedicated Aunt for her beloved Catfish with Ketchup after fifteen minutes of playing the same carnival game at the fair last August.  And this priceless treasure will go down in Christmas history like the gifts of the Magi...gold, frankincense, and "the chicken in my closet from the fairgrounds."  Merry Christmas!
Posted by EN at 8:49 PM