We'd like to extend a sincere apology to our subscribers who received the following blog post via email, full of photos and completely void of narrative.  Huh?!  Yes, as with many of the blog posts, this one was done in piecemeal fashion utilizing the mirage of uninterrupted windows of time available to me throughout the day.  And in true "Mom Brain" fashion, I accidentally hit "Publish" instead of "Save Draft" - a total amateur mistake.  Please forgive me.  Let's hope the following love story makes up for it...

If you're lucky, at some point in your life, you'll meet someone and it feels like the universe sent you on a trajectory into each others arms.  The stars aligned, the angels sang, time moved in slow motion and the only explanation was destiny.  In this moment, it feels as though you've found the other piece of your puzzle.  Finally someone "gets" you.  They "get" where you came from.  They "get" where you are now.  And they "get" where you're trying to go.  And there's no fulfillment like linking arms and agreeing that "We'll get there together.  I'm here for you!"  And off you go - an unstoppable duo.

That's how it felt when I met my friend, Kristin. 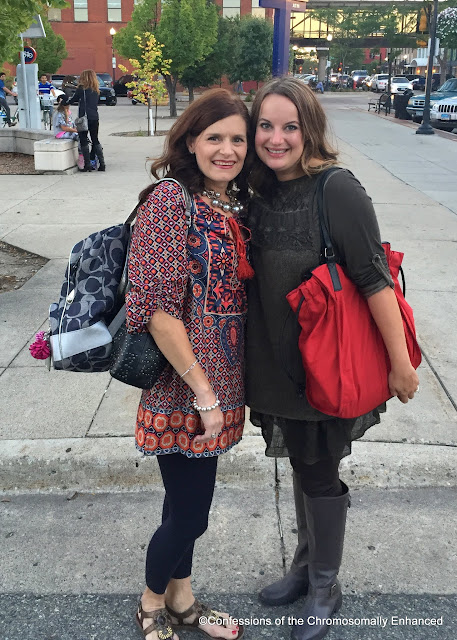 I'll never forget our first "date" at Panera.  We sat and talked for hours and I came home absolutely dumbfounded as I rambled on to Travis about all of the rather unusual life circumstances that we had in common: Little ones extremely close in age, Down syndrome, adoption, unusual fertility/birth circumstances, health challenges, parenting ideologies, neurotic Type A dispositions, extremely laid back husbands...we agreed it was "a God thing".

This bond became even more precious when our kids met (click here, Mom).  Kristin and I immediately began arranging play dates whenever we could possibly squeeze in a spare moment in our hectic schedules. 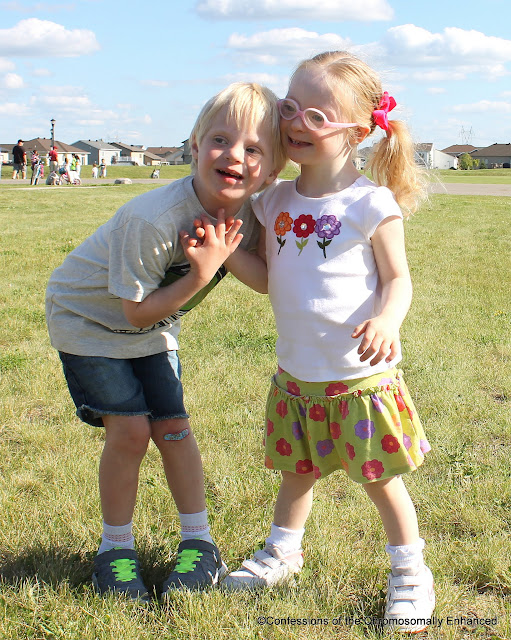 We went to the splash pad, the lake, outdoor festivals and various parks.  Kristin and I could talk for hours and our little ones would happily play for hours.  Especially these two cuties: 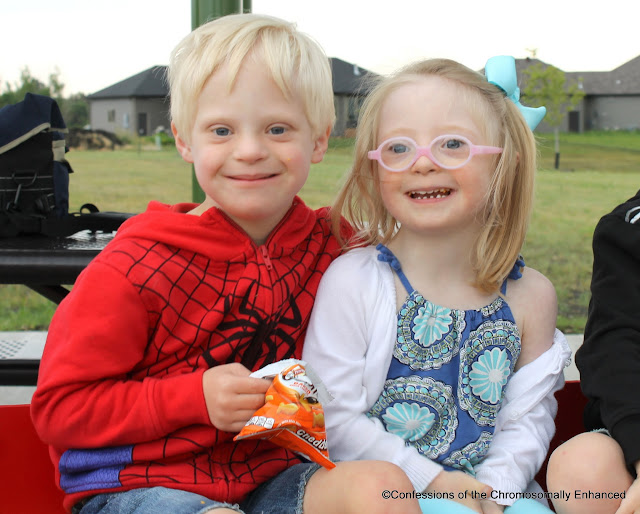 They were inseparable, giggly little lovebirds.  They became known as "The Future Monica and David" (If you don't understand the reference, you absolutely must CLICK HERE). 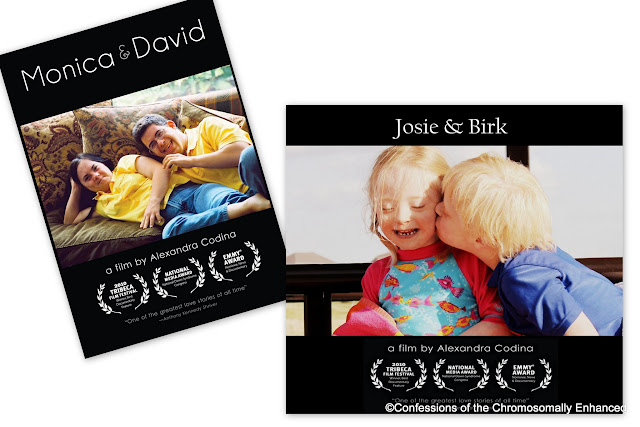 And just when we'd gotten attached to each other and just when our social lives became blissfully happy, Travis was offered another position and as we'd done many times before, we packed up and left.  Leaving the Tundra was so much more difficult than I ever dreamed it would be in large part because Kristin's family had come to feel like an extension of our own.

But this is not your average long distance friendship.  In just over a year since we left the Tundra, Kristin and I have seen each other on four different occasions.  A couple of weeks ago, she proved how devoted and wonderful (and crazy) she truly is when she packed up her family of six and they took an EIGHT HOUR road trip to come visit us in our new home.  Seriously, Folks - I think twice before taking my three kids to the Walgreens on the corner.  She packed and hauled four kids and her incredible husband through 4 states!  And it was such a joyful reunion! 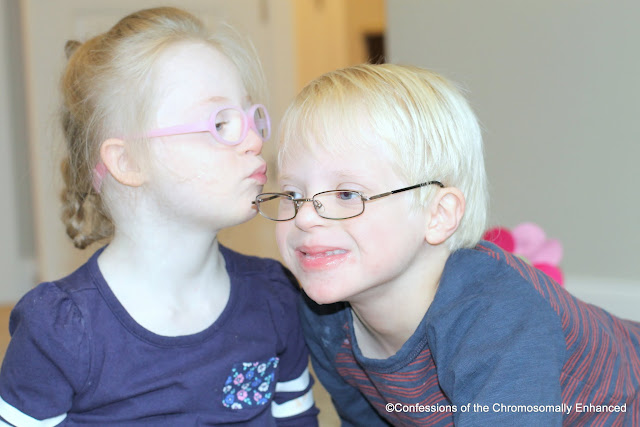 You would think that having eleven people under one roof would be a little overwhelming but it was so natural and so much fun!  We talked and we laughed and we danced and sang together (literally - there was lots of dancing and singing.  Apparently Kristin's family exists in one big, live musical like ours does.  I told you we were unbelievably compatible!).  There were so many photo ops exploding with cuteness just because the kids were being themselves and absolutely loving each others company! 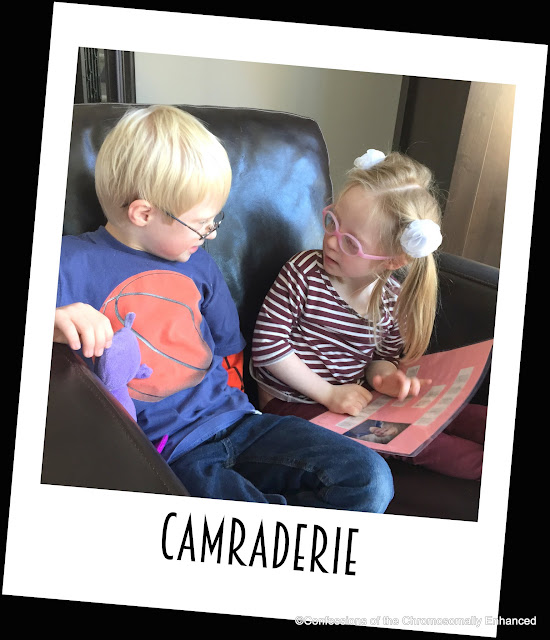 My culinary ineptitude was overlooked as adorable pajama-clad kids giggled between mouthfuls of breakfast cereal. 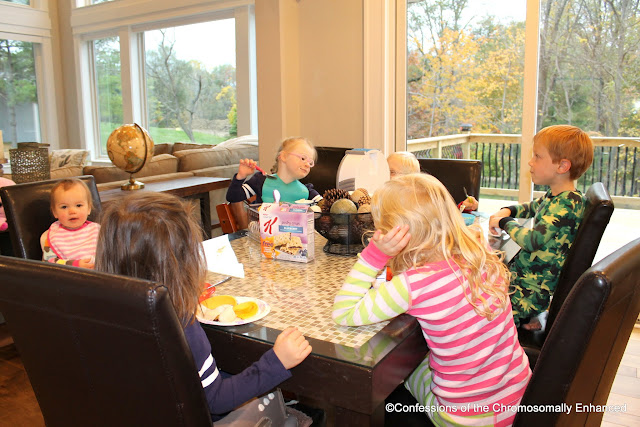 Even Kristin's beautiful teenage daughter, Madeline, happily passed on fun, teen-oriented activities to join us for the weekend and we're so glad she did because she is just awesome! 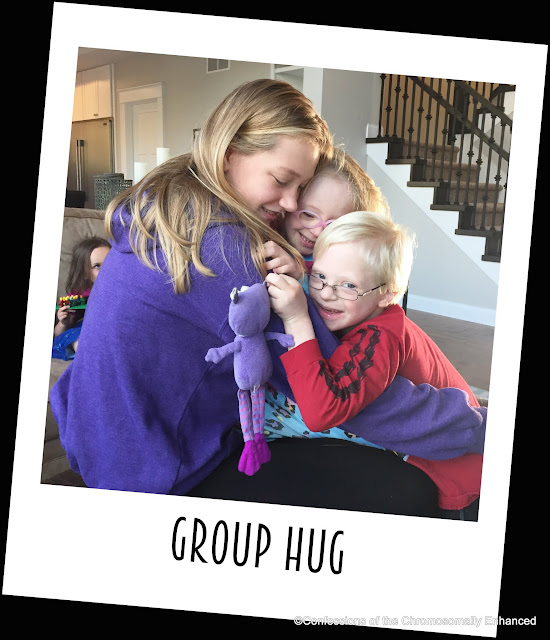 We went to the children's museum where the kids had a blast exploring. 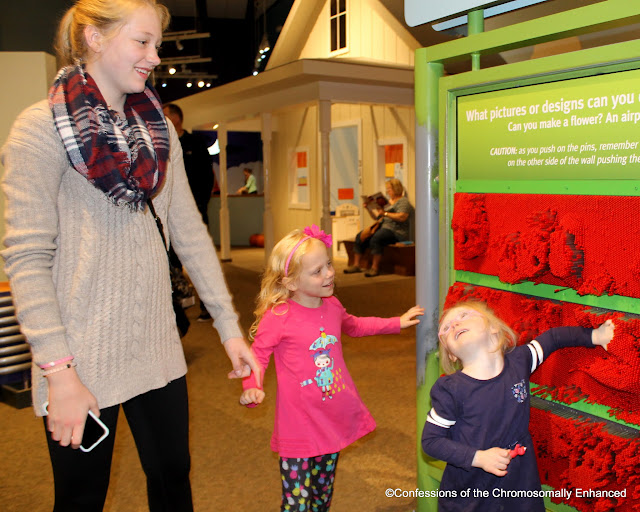 Josie would have spent the rest of her life at the bubble station if given the choice. 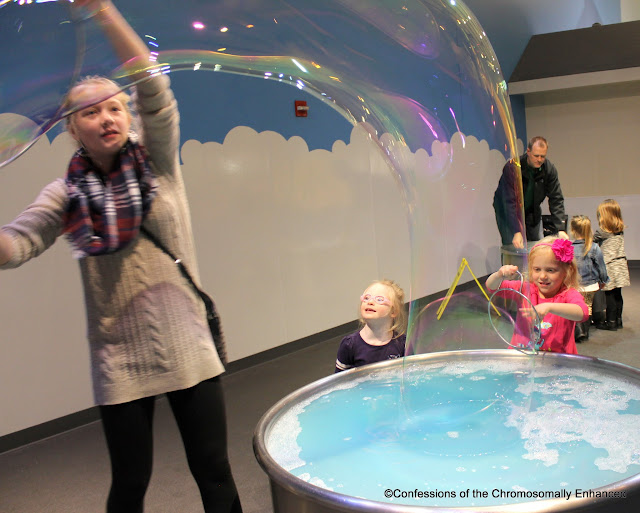 Birk wooed Josie with his athleticism (as if she needed any more reasons to adore him). 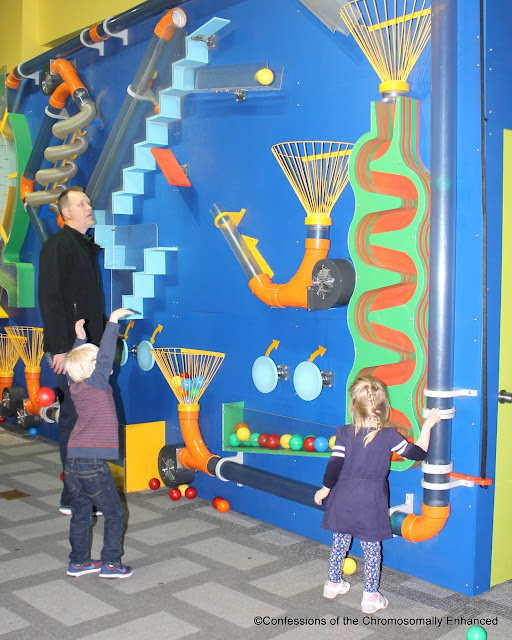 We also did the all important fall outing to the pumpkin patch... 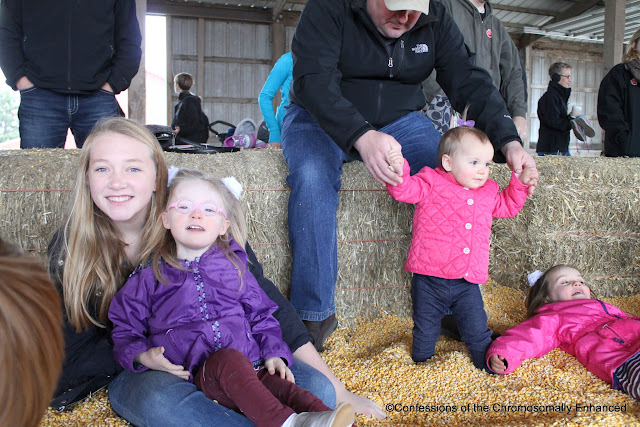 ...where there were so many fun opportunities to capture adorable moments... 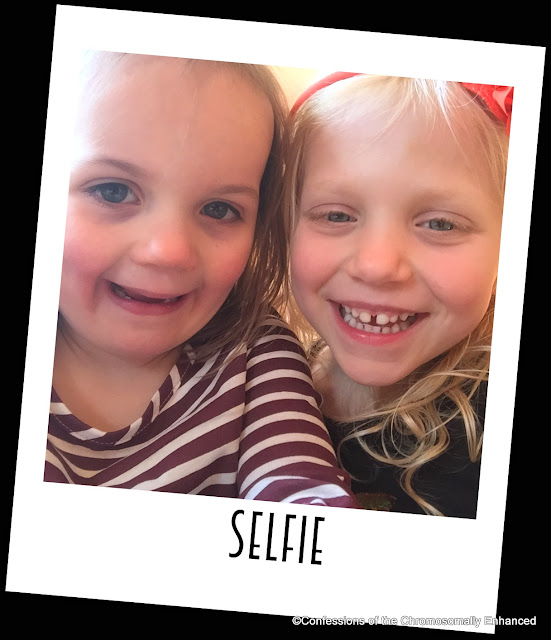 ...and to preserve what would become cherished memories. 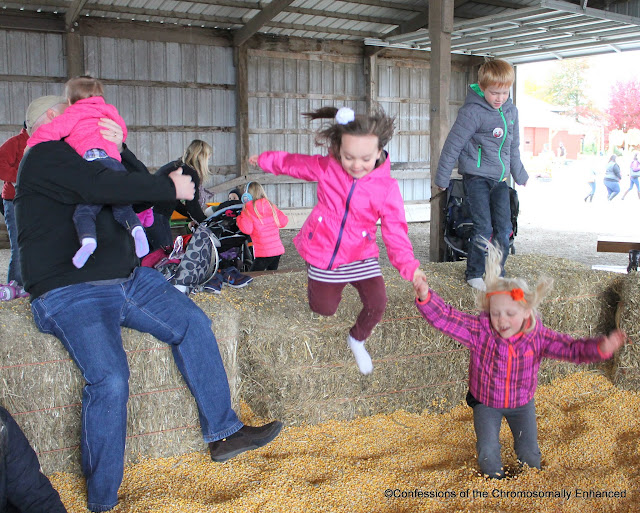 That's why I was crushed when later that day, I realized that I didn't have my camera.  I made it home with all 3 of my children, my husband, our stroller, and diaper bag (all good news) but somehow, in the sea of people eagerly seeking to achieve their quota of fall fun, my camera was lost. 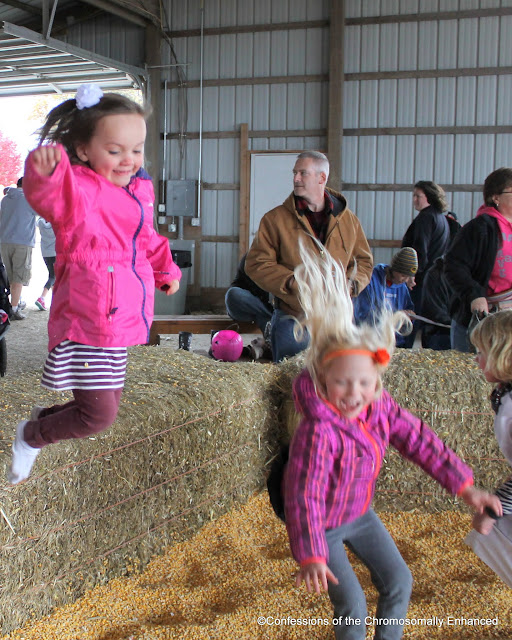 And it wasn't so much the value of the camera itself (although that made me sick)... 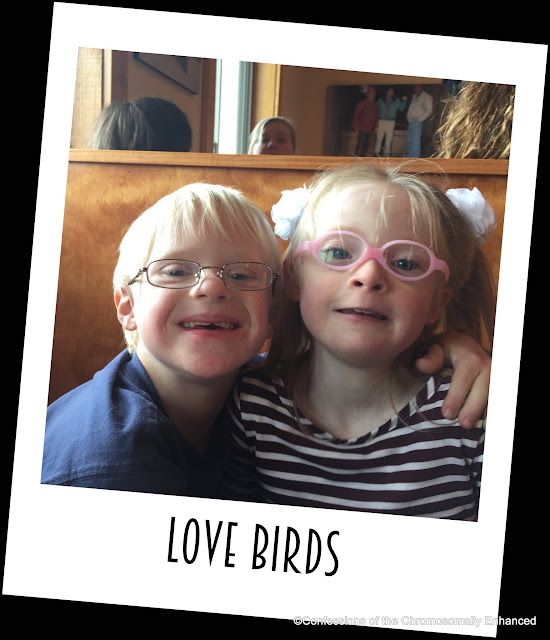 ...Or the fact that it was super irresponsible of me (I'm really hard on myself about this in general)... 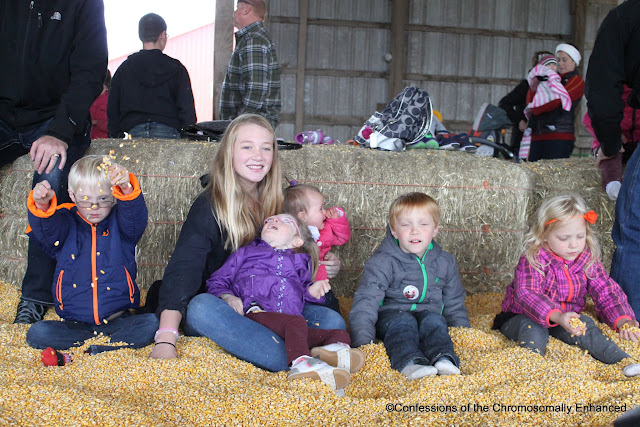 That camera held photos from the weekend that we spent with people we love so dearly; photos that would help preserve memories that will last a lifetime.  Photos that will be displayed during the slide show at the wedding of these two soulmates: 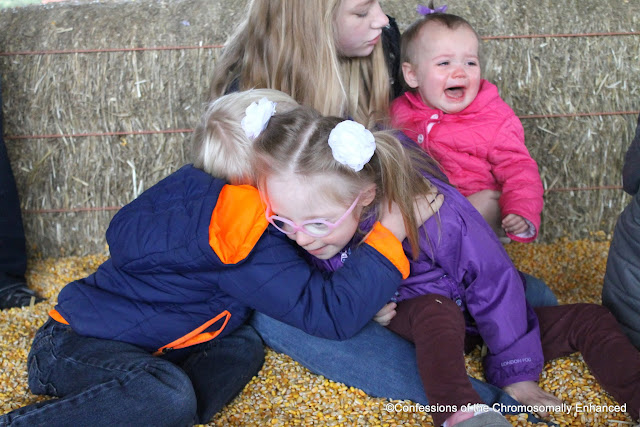 I'm pleased to report that this story has a happy ending that will restore your faith in humanity:  I called and my camera had been turned in.  They were holding it safely for me.  The world is still filled with kind and honest people.

On Sunday morning, we feasted on a delectable array of Krispy Kreme donuts (I'm telling you, no one in their right mind is going to drive across 4 states for my cooking) before it was time to bid farewell to our soulmate family.  There was so much affection exchanged between these eleven people - all of whom share a genuine appreciation for the magnitude of the bond we share. 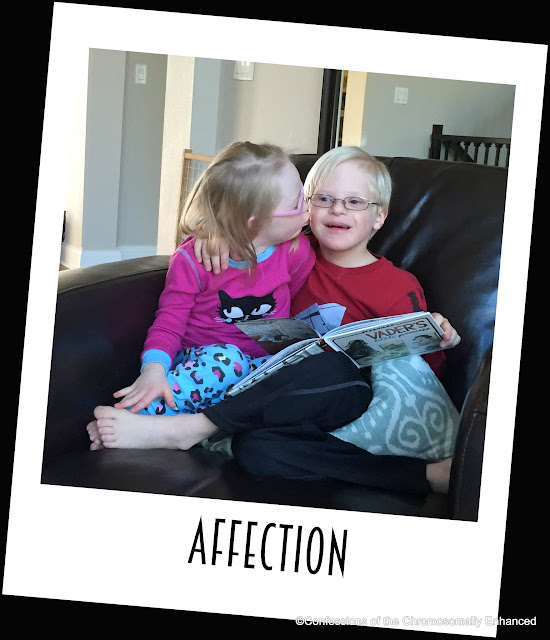 And while it was sad to part ways, we're not going to stress about it the slightest little bit because we know our future is filled with many more reunions, vacations, events, and memories to be made. 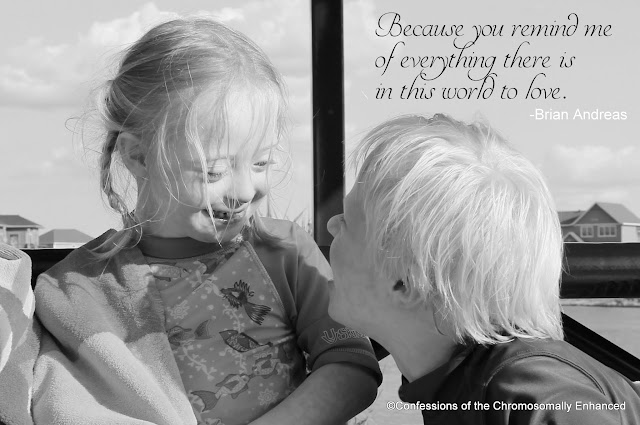