Down syndrome is often characterized by developmental delays and Josie's most significant delay is in the gross motor category.  While she will take a few celebrated steps, walking is still not her main mode of transportation.  Even though we are confident she will be a full-fledged walker someday, the sloooooow pace of her progress is, admittedly, frustrating at times. 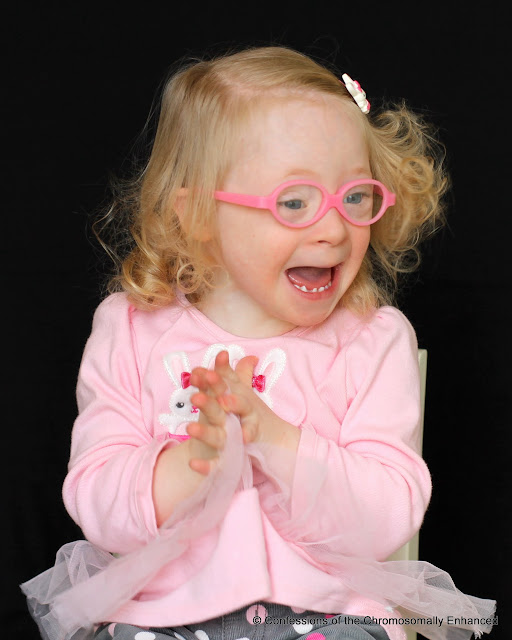 Josie's PT brought over a pair of Stabilizing Pressure Input Orthosis pants (AKA "Spanx") and Josie has been wearing them frequently.  They do seem to make her more confident in her movements.   Another major motivator, across the board, is music.  Josie lives for music!

This morning, sporting her SPIO pants, Josie gave a rousing demonstration of her gross motor "skills and abilities" (two big buzzwords for Leanne, hence, a long-standing inside joke here at CCE) in the form of the classic "Hokey Pokey":
Talk about proud!  Girlfriend did her thing!  She braced herself when necessary and when she fell down, she got back up!

Strangely enough, she kept moving throughout the song almost as though she were on a bike knowing that if she stopped peddling, the bike would tip over.  Travis attributes it to the Law of Inertia - an object in motion tends to stay in motion.  I'm not sure Josie's gross motor delays can be explained by the laws of physics or just a healthy fear of falling combined with a deep-seated need to exert her 2 year-old autonomy by reminding us that she will walk/run/Hokey Pokey when she's good and ready and not a second sooner, thank you very much.  Either way, my heart bursts with pride (and laughter) and Josie's Hokey Pokey skills.  Go JoJo, go!
Posted by EN at 1:50 PM